An unprecedented hunger strike by 750 of the 1,200 detainees in Tacoma’s Northwest Detention Center started during breakfast on March 7. The strikers’ demands for an end to deportations and inhumane conditions in the privately-owned prison has made national headlines and drawn broad community support. On March 17 the strike spread to the Joe Corley Detention Center in Conroe, Texas. Both jails are run by the GEO Group, Inc., this country’s second largest for-profit prison corporation. The Tacoma hunger strike was inspired by a dozen undocumented Washington State residents and supporters who locked themselves together at the entrance of the detention center on Feb. 24. The #Not1More activists sat down in front of a bus to block it from transporting detainees to the airport to be deported, a strategy modeled on similar recent actions by undocumented protesters in Chicago, Phoenix and Atlanta.

Daily demonstrations have been held at the Tacoma facility since the strike began and on Tuesday, March 11 over 200 people rallied in solidarity with the hunger strikers and their families. They chanted and made lots of noise to let those inside know that they had support outside.

AT A MARCH 19 PRESS CONFERENCE in front of the Tacoma detention center, Maru Mora Villalpando of #Not1More began by saying, “Obama can stop the deportations, but he has chosen not to.” She introduced several family members of the hunger strikers, who explained that their husbands andt were taking this action to expose the abuses in the detention center and to stop the deportations.

One of the strike leaders, Jose Moreno, who had just been released, spoke on behalf of those inside, saying that mistreatment by officials, as well as poor food and medical care are among the abuses the strikers are protesting.

Sandy Restrepo, an attorney with La Colectiva Legal del Pueblo, has been visiting the strikers regularly and reported that 13 detainees remain on hunger strike. Ramon Mendoza Pascual and Jesus Gaspar Navarro are in medical isolation, while the remaining 11 are in general population.

THE GEO GROUP, which reaps enormous profits from its prisons and detention centers, has a long history of unjust treatment. In 2008 at its Reeves County Detention Center in Texas, Jesus Manuel Galindo died at 32 after suffering an epileptic seizure in solitary confinement. Galindo was thrown into “the hole” after he complained about his medical care.

The GEO Group is also politically active in promoting laws that will keep its for-profit prisons full. The corporation took part in the task force of the American Legislative Exchange Council (ALEC), which pushed bills for “truth-in-sentencing” that reduce paroles and “three strikes” legislation that increases life sentences.

ACROSS THE COUNTRY undocumented immigrants, especially women, youth and detainees, are putting their bodies on the line to demand an end to endless deportations. It is 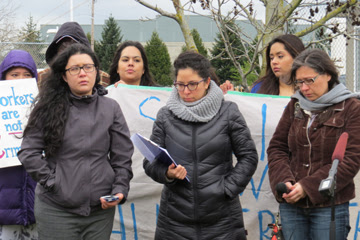 The Dignity Campaign, which is endorsed by dozens of grassroots organizations, including the Freedom Socialist Party, called the CIR strategy a “deal with the devil” in a March 2014 statement:

“The CIR trade-off — giving up immigrants’ civil and labor rights to get legalization — has always been an unworkable strategy for immigration reform. The CIR bills serve the interests of employers. Whether they’re looking for farm workers, construction workers or high tech workers, the corporate objective is to ensure that wages go down as workers compete for insecure jobs.

While CIR languished in Congress, community and labor activists, mostly young, have refused to wait or compromise, and instead have organized on the ground to win rights and equality.” 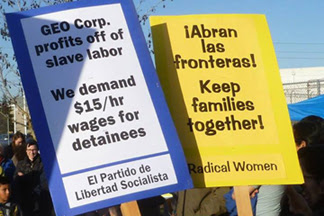 activism. At the March 19 press conference, strikers Pascual and Navarro sent encouraging taped messages to the hunger strikers in Conroe, Texas. “We’re not doing anything wrong, we’re demanding our rights. You should keep going forward, and not yield,” said Navarro, followed by Pascual who added, “Don’t be afraid, we must keep going, so that we are heard and so that we can be free.”

How you can help

SIGN the online petition to support the hunger strikers at the Northwest Detention Center.
SEND donations to La Colectiva Legal del Pueblo so that they can help detainees and their families communicate with each other. Mail checks to 645 SW 153rd Street, Suite C3 Burien, WA 98166. Email: info@colectivalegal.org.
PARTICIPATE in the National Day of Action against deportations being planned across the country for April 5th. There will be a rally at the Tacoma detention center that day from noon to 5:00pm. Anyone interested in carpooling from Seattle, please contact the Freedom Socialist Party at FSPseattle@mindspring.com. Learn more about the national campaign at notonemoredeportation.com.
JOIN the #Not1More protests in front of the Northwest Detention Center that take place every day from noon to 5:00pm leading up to the April 5 rally.

Miriam Xiomara Padilla is a high school student and a leader in the Campaign to Free Nestora Salgado in Seattle. Su Docekal is an immigrant rights activist and Organizer for the Seattle branch of the Freedom Socialist Party. 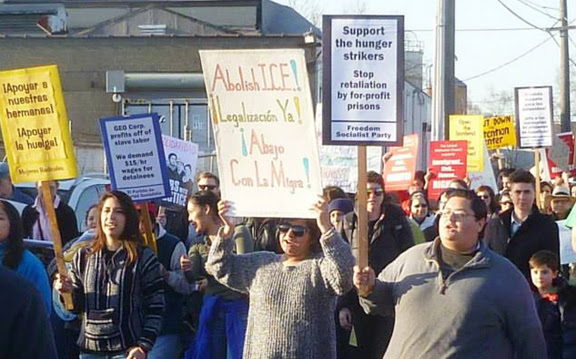