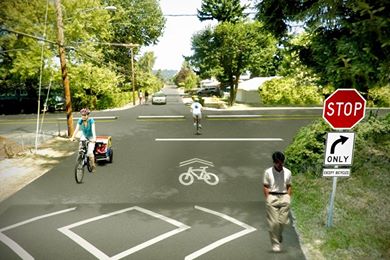 A Pop-Up Greenway is a temporary installation to demonstrate and celebrate the effectiveness of neighborhood greenways. The Rainier Valley Pop-Up Greenway, located on a proposed greenway route near the Columbia City light rail station, will include faux painted speed humps, way-finding signs, sharrows and intersection improvement suggestions that demonstrate what a greenway could look like. The event will also feature food, walking tours, hands-on activities, and games for the whole family.

Neighborhood greenways are residential streets close to commercial streets where people who walk and bike are given priority. They have slower speeds, less traffic and sometimes more trees, benches and other people-friendly features than main city streets. Greenways also connect community destinations like schools, parks, businesses and transit hubs.

“It’s been amazing to see how much interest there is in Rainier Valley for safer streets,” says Deb Salls, executive director of Bike Works, a key organizational partner in the Rainier Valley Greenways project. “We have a diverse community, where family members of all ages, abilities, and backgrounds are trying to walk, bike, and bus to different destinations — and in this community there can be a lot of obstacles, from uneven sidewalks, to poorly marked streets, and dangerous signal-timing.”

About Rainier Valley Greenways: Rainier Valley Greenways is part of a city-wide grassroots movement called Seattle Neighborhood Greenways that is helping residents and businesses transform Seattle into a city where we can all walk and bike more safely. Working with leading organizations, businesses, and social service groups in Southeast Seattle, the Rainier Valley Greenways group is participating in a variety of local events throughout the year, offering community presentations, and generating discussions online at: http://www.GoRVGreenways.com. By August 2014, they expect to have a Greenways plan that highlights the best opportunities for walking and bicycling routes from one end of Rainier Valley to the other. They’ll present the neighborhood-driven proposal to the City as a plan for prioritizing road and sidewalk repairs, traffic-calming elements, and other enhancements for safer walking and bicycling in Southeast Seattle.