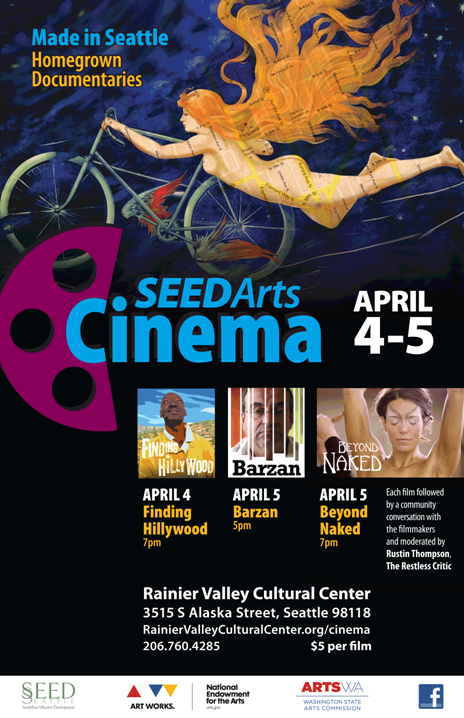 Seattle, WA – Bicycling nudists, Rwandan filmmakers and a Seattle family confronted by terrorism are the intriguing characters you’ll meet at the second annual SEED Arts Cinema Series SEEDArts Cinema Series, “Made in Seattle: Homegrown Documentaries”. The two-day series, April 4 & 5, is comprised of three dynamic, award-winning, locally made documentaries to be screened at the Rainier Valley Cultural Center, 3515 S Alaska St, Seattle, WA 98118. The films are Finding Hillywood (4/4 at 7pm), Barzan (4/5 at 5pm), and Beyond Naked (4/5 at 7pm). Each film will be followed by a community conversation with the filmmakers and moderated by Rustin Thompson, The Restless Critic.

The Cinema Series opens on Friday, April 4 at 7pm with a screening of Finding Hillywood. Set amongst the hills of Rwanda, Finding Hillywood chronicles one man’s road to forgiveness, his effort to heal his country, and the realization that we all must one day face our past. A unique and endearing phenomenon film about the very beginning of Rwanda’s film industry and the pioneers who bring local films to rural communities. A real life example of the power of film to heal a man and a nation.

The Series continues on Saturday, April 5, with an evening double feature. At 5 pm, we present Barzan by directors Alex Stonehill & Bradley Hutchinson. Barzan is an intimate portrait of a suburban family ripped apart by a terrorism accusation. Shot both in Iraq and Seattle, this investigative documentary examines terrorism, immigration, and the sacrifices we make to protect the American dream.

The series concludes at 7pm with Beyond Naked, the “Best Documentary” of the Seattle True Independent Film Festival (2013). This film shows what happens when four first-timers accept a challenge to ride naked in Seattle’s legendary Solstice Parade. This feature-length documentary explores our deep-rooted fear and awkward fascination with nakedness through the lens of one of Seattle’s most popular traditions.

Admission to the Cinema Series is $5 per film. All films will be screened on the new digital projection system at the Rainier Valley Cultural Center, 3515 S Alaska St, Seattle, WA 98118. Limited concessions will be available. For more information and updates, call 206.760.4285 or visit http://www.rainiervalleyculturalcenter.org/cinema.