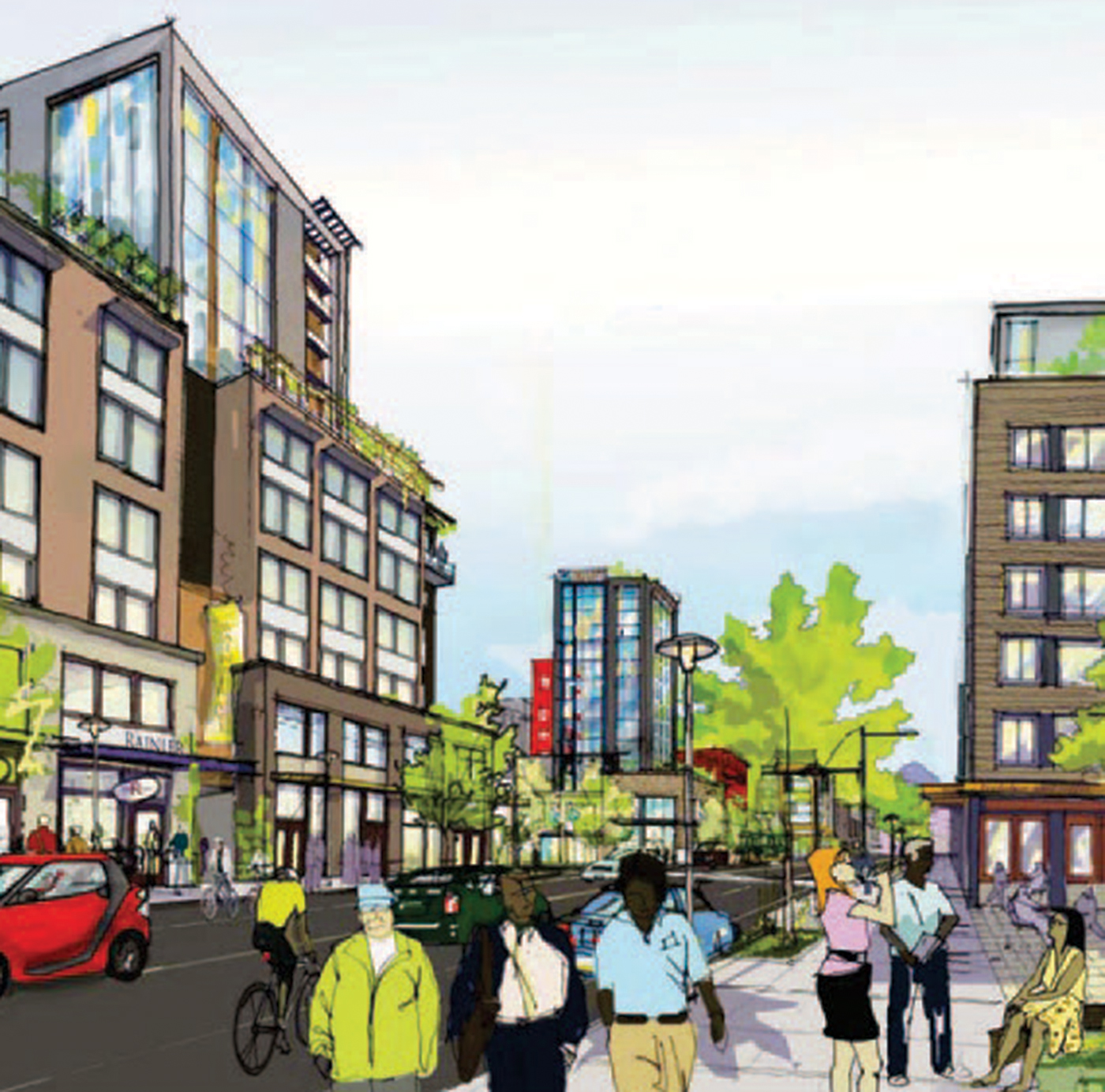 At the beginning of this month, I attended a meeting of the Seattle City Council’s PLUS (Planning, Land Use, and Sustainability) Committee.  The Committee hosted this meeting to hear public comments on the proposed rezone of the area around the Mount Baker Link Light Rail station.  This is the area that has been identified for the location of the North Rainier Urban Village (http://www.seattle.gov/dpd/cityplanning/completeprojectslist/northrainier/whatwhy/).  The rezone would change the existing zoning to a designation called Seattle Mixed-use and raise height limits to 65, 85, and 125 feet, depending on the parcel of land in question.  I attended to testify strongly in favor of this proposal, as it represents the best way to develop Rainier Valley in a way that is inclusive, attractive, and future-focused.

The reason for the proposed rezone has its roots back almost 15 years.  Back in the late 1990s, the Seattle Department of Neighborhoods, in tandem with neighborhood residents and other stakeholders, developed a vision for the northern corridor surrounding Rainier Avenue South.  Through this plan, they envisioned development that was transit-oriented, mixed-income, and walkable.  While the rest of Seattle has continued to change at a rapid pace and Link Light Rail brought much needed connectivity to the neighborhood, the status quo, with respect to zoning, has not led to the kind of development desired there.  Much of the area remains low-density strip malls or underutilized buildings that fail to engage pedestrians or integrate well into their surroundings.  The rezone would create additional incentives and a framework to make this happen, in a way that is consistent with the original vision.

Naturally, any plan that intends to bring large-scale change will lead to some degree of contention.  Residents from all over Southeast Seattle packed the Committee hearing on a day where the temperature rose to an unseasonable 80 degrees.  Many of the opponents to the planned rezone showed up early and made their concerns known loud and clear.  The kinds of structures that would be built would be out of character.  The new development would lead to traffic and congestion.  If current levels of retail occupancy in mixed-use developments continued, new buildings would fail and too many workforce housing units would lead to unintended consequences.  Many opponents also expressed concerns about the process that produced the proposed rezone.  They had not been adequately informed or consulted, they said.

As someone who has been engaged with the North Rainier planning process since 2011, I was concerned by what appeared, at least very initially, to be overwhelming opposition.  Thankfully as the comment period continued, a greater number of proponents began to lay out their arguments and restore balance.  Ultimately, after two hours of testimony and public comments, it seemed reasonable to say that while the concerns were not entirely unreasonable, that they misguidedly defended a suboptimal status quo for fear of unknown (as opposed to likely) outcomes.  At the PLUS Committee, I expressed an abbreviated version of the following opinion:

I’ve lived in both Columbia City and, before that, Mount Baker, for the past three years.  In Mount Baker, I lived on Walden Street, one block from the area to be rezoned, in a mixed-use building.  Currently I live in Columbia City less seven-tenths of a mile from the proposed rezone.  I support this proposal because it will add a critical mass of infrastructure, people, and amenities.  Currently much of this area is underutilized urban space.  For many, it can feel unsafe and it is unquestionably unpleasant to navigate on foot.  Anyone who has lived in the area knows, for instance, about the activity around the National Pride Car Wash.  Right there, on the street, is what appears to be an open-air drug market.  A year and a half ago, two people were shot at this location (http://www.komonews.com/news/local/Teens-wounded-in-South-Seattle-175528391.html).  There aren’t enough eyes on the street and this kind of development does not benefit anyone.

As City of Seattle’s Planning Department notes, Seattle will add 70,000 households in the next two decades—that’s significant.  If Seattle cannot build the density to accommodate these future residents, we will end up with a housing and affordability crisis much like San Francisco’s.  There, the crisis has created an immense amount of discord and class conflict as rising housing costs have displaced long-time residents.

For one, they got the zoning wrong (http://www.theatlanticcities.com/housing/2013/10/san-francisco-exodus/7205/).  Speaking to NPR, Former Mayor Art Agnos noted that in San Francisco the discussion is no longer about whether San Francisco can be a city for all people, but whether it can be affordable for those earning between $60,000 and $150,000 a year (http://www.npr.org/2013/12/03/247531636/as-rent-soars-longtime-san-francisco-tenants-fight-to-stay)!  The median income for a worker in Seattle is currently under $60,000 and there are many similarities between our two cities.  In a city growing as rapidly as Seattle, there will be trade-offs.  In North Rainier, as it will be citywide over the coming decades, the trade-off will be managed density for sustained blight in some places and escalating housing prices in others.

Lastly, on the issue of workforce housing, there are many assumptions being made about people who will live in income-targeted housing, as well the number of units under consideration.  The current zoning proposal will require developers to include a limited number of affordable units for each of their projects, if they want to build to the maximum heights allowable under Seattle Mixed.  This is known as incentive zoning, and in a city where rents have soared over the past two years (http://seattletimes.com/html/localnews/2021673014_rentincreasesxml.html), an essential tool in keeping Seattle income-inclusive.  This will not entail the construction, as some seem wont to believe, entire parcels of housing for the indigent.  Indeed, for the purpose of the North Rainier rezone the units in question will be targeted those individuals earning 60-80% of area median income.  For a single-person household, this is an income in the mid-$30 to mid-$40,000 a year.  Large numbers of white-collar workers, particularly those starting out in careers, fall into this category and I, too, qualified for and lived in workforce housing while working at what was an e-commerce start-up.

The proposed rezone of the area around the Mount Baker Link Light Rail station represents both the continuation of a neighborhood visioning process begun in 1999 and an opportunity to bring  quality development to Rainier Valley.  For too long, the area has suffered from underinvestment, crime, and blight.  Smarter levels of density, in conjunction with the transit links already established by Sound Transit, will lead to development that is engaging at street level, unnecessary to traverse using motorized vehicles, and safe for people of all ages.  Different neighborhoods (pick your favorite example) around Seattle have used rezones to create beautiful urban spaces worthy of the name.  Rainier Valley, too, can rise.
Note* The Seattle City Council Land Use And Sustainability Committee will be meeting this Tuesday, May 20th to discuss the Mt. Baker Rezone:  http://www.seattle.gov/dpd/aboutus/news/events/default.htm?trumbaEmbed=eventid%3D110117410%26view%3Devent%26-childview%3

One thought on “Why The Mt.Baker Rezone Is The Right Move For South Seattle”