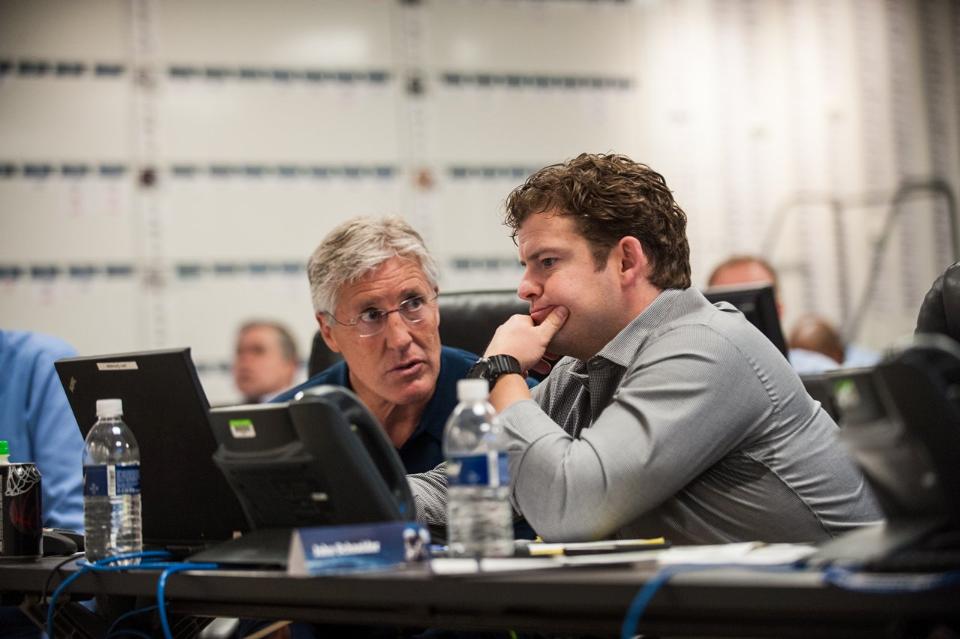 If you are a Seahawks die hard like me you probably spent the weeks leading up to the draft looking at Mocks, reading insights about the prospects likely to be there around the end of the first round and hoping it all fell into place so that the Seahawks got a top 10 talent that somehow fell into their lap.  Instead the Seahawks did what they have done for the last three years and picked individuals rated by “experts” far lower than the spots the Seahawks took them in, leaving us all running to our computers to learn about who these mysterious players are.

Full disclosure, I am no scout, and I cannot break down tape and tell you why the Seahawks took the players they did when they did.  Based on their track record, I do have confidence in their ability to find underrated prospects and develop them better than any other team in the NFL.  I will attempt to breakdown the draft to focus on the positions taken, how prospects in the past have fared under this coaching staff, and the likely contribution of this draft class for this season.

Wide Receiver – Seahawks took Paul Richardson in the 2nd round out of Colorado, and Kevin Norwood in the 4th round out of Alabama.  They are different players with Richardson offering pure speed and over the top ability versus Norwood closely resembling Jermaine Kearse and boasting strong hands and the ability to catch the ball in traffic.  The only major contributor to the receiver position via the draft under John and Pete was Golden Tate, and he did not contribute much his rookie or second years in the league.  With Harvin, Baldwin & Kearse locked into the top three spots both rookies won’t be relied upon for high snap counts this year.  I believe Richardson will have big play opportunities, and might score 3-4 touchdowns this year in his limited opportunities, but the receiver position is generally very difficult to find immediate contributors as rookies.  Expect both players to make the roster and contribute as supporting cast member this year.

Offensive Tackle – Seahawks selected Justin Britt in the 2nd round out of Missouri, and Gerrit Scott out of Marshall in the 6th round to add to the right tackle competition with 2nd year player Michael Bowie.  The both possesses all the prototypical size and speed tools, and offers toughness and depth to a position in need of it.  In the past the Seahawks have drafted former first round pick James Carpenter to play RT opposite Okung, but he struggled with speed on the outside and was moved inside to guard where he has struggled with injuries and been moderately successful when healthy.  The Seahawks also drafted Russell Okung in 2010 as a top 10 pick, and when healthy he has played at a pro bowl level.  The Seahawks have been as effective developing undrafted players, late picks, and practice squad players like Bailey, Bowie, & Giacomini at OT as they have in drafting players in the first round like Okung and Carpenter.   Expect a healthy competition to exist between Britt and Bowie throughout camp, but Bowie to have the 2nd year advantage and to play significantly better in his second season winning the starting job, Scott is more a developmental prospect not likely to play this year.

Defensive Line – Seahawks selected Cassius Marsh in the 4th round out of UCLA, and Jimmy Staten out of Middle Tennessee State in the 5th round to help offset the defensive line losses of Red Bryant and Chris Clemens.  Defensive line is an area the Seahawks have targeted the two prior years in 2012 draft and 2013 draft but saw little time on the field last year due to injury.  I expect 2012 late round pick Greg Scruggs returning from knee surgery as well as 2013 draftees Jesse Williams and Jordan Hill will play much larger roles this year, but these two rookies have a chance to contribute this year.  Rotational snaps are up for grabs due to free agency departures, but I see it more likely that the second and third year players fill these gaps and barring injury these two rookies again have minor roles to play for the 2014 season.  If I have a dark horse for 2014 it would be Staten because he is such an unknown.  The Seahawks have an outstanding track record of taking players late completely off the experts radar and developing them quickly in Sweezy for 2012, and TE Willson in 2013.  Staten was the most off the radar pick the Seahawks made this year making him possibly the most likely to contribute early.

Linebacker – Seahawks selected Kevin Pierre-Louise in the 4th round out of Boston College to add to the outside linebacker depth.  Pierre-Louise is a slightly undersized linebacker that timed the fastest 40 at the combine, and provides even more athleticism to a group that has it in spades.  The Seahawks have been incredibly good at drafting linebackers to play right away in KJ Wright & Bobby Wagner, and well as developing talent over time in Superbowl MVP Malcolm Smith.  The position and physical attributes match up well with Smith, and with both he and Wright approaching free agency next year Pierre-Louise is a good developmental prospect who could grow into a starter next year when budgetary decisions might have to be made.  Expect Pierre-Louise to play special teams this year and limited snaps on defense as Seattle currently has 3 starting caliber outside linebackers in Smith, Wright & Irvin for only two starting jobs.

Secondary – Seahawks Selected Eric Pinkins in the 6th round out of San Diego State.  He played a hybrid safety/linebacker position in college at 6’3” and 220 pounds, but due to his size and speed the Seahawks plan to convert him to CB over time.  The Seahawks’ secondary is the envy of the league boasting late round developed players in Sherman, Chanceller, & Maxwell.  None of these players started immediately with Sherman playing halfway into his rookie year only because of two injuries at the position in front of him.  Maxwell also became a starter due to suspension and injury after two and a half years of development, but when given the chance played exceptionally well last year.  Pinkins sets up to be a practice squad player based on the position switch and the depth in front of him, but could be a key player for this secondary down the road learning from the best and competing every day during practice. I don’t anticipate any contribution this year other than potentially special teams.

Fullback – Seahawks selected Kiero Small out of Arkansas in the 7th round to compete with existing fullback conversions Kevin Ware and Derrick Coleman.  The past two years have seen the Seahawks take bigger running backs in Ware and Coleman and convert them to fullbacks to compete or replace Michael Robinson.  Ware was hurt in the preseason last year and placed on IR, and Coleman also had a significant injury forcing management to bring Robinson back midyear.  Both existing players are hybrid fullbacks with a running back history, and significant room for improvement in their fullback duties.  Small in short in stature, but heavier than both Coleman and Ware, and seems to bring a natural aggression to the position.  Coleman was a major contributor on special teams last year possibly making it hard to move on from him, but Small brings a skillset on offense the Seahawks don’t currently have.  Expect him to make the team and possibly play a larger role than most of this draft class this year, as we attempt to re-establish our ability to consistently run between the tackles on any defense again this year.

Early 2013 draft picks barely saw the field last year due to health at their positions holding up, and a sharp learning curve for any rookie new to the NFL.  The players that saw the most time were Bowie (7th round), Bailey (undrafted), and Willson (5th round), and in each case there were significant injuries to the OL and TE positions last year forcing them into action.   The 2014 draft class’s contributions this season are likely to again hinge on the health of starters already on the roster, with limited apparent holes that need to be filled.  The Seahawks have built one of the deeper rosters in the NFL by thinking long term in their draft approach, developing talent through excellent coaching, and embracing competition at every level of the organization.  I expect we don’t hear much from this rookie class this year, but in 2015, 2016 and beyond we very well could be looking back at this draft providing multiple starters and hopefully a pro bowler or two that once again the “experts” never saw coming.

Clint Elsemore has been a fanatic Seattle sports fan for his entire life, and possibly several past lifetimes should reincarnation be proven to be a fact.