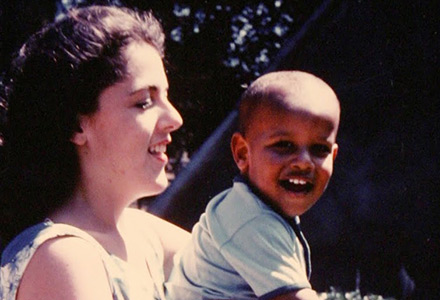 Editor’s Note: The Emerald was extended an invitation to cover the Seattle International Film Festival. As our arts reportage serves the dual purpose of showcasing the amazing array of artist and their projects, who reside within the South Seattle area, and also to draw attention to unique artistic works which are rarely highlighted elsewhere, yet have the potential to be enriching cultural experiences for our readers, The Emerald accepted the opportunity to cover a few select films playing at the festival which we felt would be of particular interest to our readership.

The opening of Obama Mama began with a black and white picture of Stanley Ann Dunham amidst audio recordings of people lauding her intelligence and spirit. As the video progressed, I realized immediately that this was going to constitute the bulk of the film. The first hour of the film consisted entirely of interviews with Dunham’s old classmates, recounting how smart, curious and progressive she was through a combination of anecdotes and a very, very extensive history of the civil rights movement. Though the film did an adequate job of beating into the audience that Dunham was, for being born and raised primarily in Texas, progressive and a mental force to be reckoned with, as an audience member I felt inclined to announce, “Okay, I got it!”

The history of the 1950s-1970s, as well as interviews with the same five high school classmates, was repeated ad nauseum, and I found myself wondering whether the director had placed any faith in her audience that they had knowledge of basic history. The persistent repetition of basic facts was drilled into our brains still more thoroughly through the use of short animated sequences to further clarify the points being made. For example, a drawing of a black and a white hand joining to create a cartoon baby was used when an interviewee spoke of Dunham and Barack Obama Sr.’s marriage. The combination of illustration, repetitive interviews, and historical facts succeeded in creating a strong picture of who Dunham was as a young woman, but the information that was relayed could have been achieved in half the time that the movie utilized.

Some of the most interesting aspects of the film centered on Dunham’s work campaigning for the rights of Indonesian female laborers. Though the film did effectively detail this it was again with the over-thoroughness that made me uninterested by the time this chapter was over. As a result, we didn’t get to her life’s work until over an hour into the film. This had the effect of boring me enough that I was much less invested in Dunham’s fascinating work in Indonesia than I ordinarily would have been. That being said, the section of the film dealing with her work in Indonesia was the strongest aspect of the piece, mostly due to the stand alone strength of her labor. The Indonesian culture that was detailed in the film was additionally fascinating, but again had little to do with Dunham and felt once more like a history lesson.

Ultimately, the film felt as if the director did not have enough material to fill an entire 90 minute SIFF piece, so instead of shortening the work, she simply dragged out each section to fill the time. This was even apparent in the vagueness of the interview candidates – many of their points centered on speculating what Dunham “would have done” or “would have liked”, as if they did not know her in the slightest – and in fact, many did not. Additionally, they used the same five photographs of her, as if they did not have any others. Although the film made a bold choice in not involving Obama in its production – it focused on Dunham’s work by itself rather than her relationship with the President – the result was a dearth of material that made what they did have too lengthy and overly sentimental. By the time the film got to Dunham’s 1995 death, rather than being saddened by the passing of a truly remarkable woman I was relieved that this would be the final montage I had to sit through before the end of the film.

The bottom line: A truly remarkable life of a wonderful woman was made boring by over-explanation, lack of information, and pointless montages that took away from, rather than added to, the uniqueness of Dunham’s life. The documentary was unsuccessful in creating a compelling story out of her life – if you’re interested in Obama’s mama, Obama Mama might not be the best source.

Mary Hubert is a performing artist, director, and arts administrator in the Seattle area. When not producing strange performance concoctions with her company, the Horse in Motion,  she is wild about watching weird theater, whiskey, writing and weightlifting.