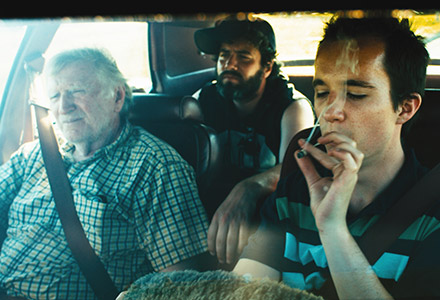 Editor’s Note: This is the second installment of our series South Seattle Goes To SIFF

We’ve all driven through those towns that seem like no one lives there – or that no one should. Bleak, dusty horizons, the occasional meth head ambling by, and a corner store that looks like it hasn’t had a customer in the last century or two. In BFE, director Shawn Telford seeks to portray the lives of those who live in these forgotten towns – particularly, those still young and figuring their shit out. Sound familiar? It is – we’ve seen this storyline more than enough times over the last 25 years. However, despite numerous glaring issues, the film turns out to be quite entertaining.

The loosely constructed storyline follows three high schoolers in the town of BFE: Ian, preoccupied with caring for his dying Grandpa; Ellie, living in a meth house while trying to protect her baby sister; and Ellie’s boyfriend Zack, who must deal with his attraction to his friend’s mother. Sound like a lot? Just you wait, we’re not done! We still have to throw in Tom, the Korean kid battling against the “old ways” of his stern father; a scraggly crew of drug dealers; and a horde of other teenage boys that are buddies with our leading crew.

Telford has attempted to create a slice-of-life style flick that draws parallels between the intersecting lives of everyone in the town. And largely, he succeeds. The dialogue is witty, the scenes with the boys remind me of my own high school adventures, and there are enough characters to fill a movie three times the film’s length. Which actually turns out to be the problem with this cute little movie: it needs to be three times as long to successfully fit that many stories.

In the first half of the film, we see missed moments happen again and again –scenes that try to be both funny and poignant instead have to rely on the barrage of jokes flying throughout every scene, because with so many characters to get to, we can’t possibly get enough screen time with each to care about them. True, the jokes are well thought out, and everything rolled along relatively seamlessly, but I found myself wanting more from the first half of the film than giggles.

As a whole, the film did about 75% of what it set out to do. The town was there, the characters were there, the clichés were there, and the jokes were certainly there. I was rarely bored, and when I was, the kickass soundtrack was always there to distract me. Telford’s use of close camera shots was aesthetically pleasing, and though the ending was cheesy, it fit with the fluffiness of the movie as a whole.

What I missed from the film were the gut-punches, the investment in the brilliantly witty characters, the desire to watch them succeed and the hurt when they did not. The problem with throwing all of the moments in instead of selecting the best ones is that the audience comes away with none of them. In short, everything was there – just too much of it.
The bottom line: Despite the film’s overall disjointedness and Telford’s desire to cram six storylines into a 90-minute film, the witty dialogue and killer soundtrack made the piece a very enjoyable bit of fluff. Go check it out!