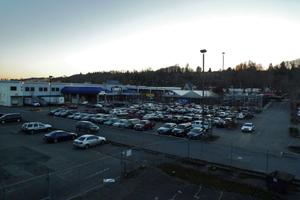 News Brief: On Tuesday, the City Council’s Planning, Land Use, and Sustainability (PLUS) Committee passed the bill to rezone the area around the Mount Baker Light Rail Station. On a 4-1 vote, with Bruce Harrell dissenting, the Committee moved the legislation to the full Council for a vote on Monday, June 23rd.

Echoing concerns from some area residents that the legislation has moved too quickly, Harrell proposed two amendments. The first amendment would have tabled the bill indefinitely for further study. This amendment failed when no additional Councilmembers came forward in support. The second amendment substituted a height limit of 85 feet (instead of the original 125) on the parcel currently occupied by Lowe’s Home Improvement. It too failed on a voice vote.

In last ditch effort to derail the legislation before going to the full City Council, opponents of the Mount Baker rezone came out in full force. They wore t-shirts saying “NO REZONE” and “Jobs NOT Apts”. As in previous meetings, they contended that they had not been fully included in the process, and that a rezone would fail due to slack demand for market-rate development while causing land values to escalate, threatening small businesses.

A final amendment by Councilwoman Sally Clark, one that sought to assuage fears that a 125 foot residential apartment complex may be built on the Lowe’s site, also failed without additional support. Clark’s amendment sought to explicitly limit the proportion of development on the site for residential development, if a structure nearing the height limit was, in fact, built.

Editorial: The PLUS Committee made the right decision to move the legislation for consideration by the full City Council. While opponents of the bill organized an impressive number of people to speak against the bill on Tuesday, they continued to provide an unclear sense of what they wanted with respect to the legislation itself, as well as a lack of realistic alternatives to bring about the one thing they all agreed they wanted: jobs.

In the course of three Committee meetings, opponents of the Mount Baker rezone have, at different points, said they want the legislation tabled so that it could go back to the community for reconsideration and that the rezone should not occur at all. They have also concurrently claimed that a rezone will fail to attract new development and that a rezone will result in gentrification. The opponents of the legislation give the impression that they are talking out of both sides of their mouths or throwing in every objection but the kitchen sink to stop the legislation.

On the issue of jobs, there is also more smoke than light. Opponents of the rezone have focused on the mere possibility that a developer could construct a 125 foot residential complex as a fatal flaw and a reason to reduce the height limit on the Lowe’s site, as proposed in Councilman Harrell’s amendment. They contend that the Seattle Mixed Use designation would result in residential units crowding out the possibility of commercial uses and therefore living-wage jobs. It has been pointed out multiple times, however, that the only structure rising to 125 feet that would make sense from a developer’s perspective would be commercial or mixed commercial/residential. Less flexibility in height restrictions would then only serve to limit the kind of potential commercial development that could occur. The “solution” to this problem would be counterproductive.

If bringing jobs to Rainier Valley is desired end, a rezone at 125 feet makes more sense than the alternatives that have been proposed. The process, one which began in 2009, has gone on long enough. Developers need a solid framework upon which they can predictably draw up plans and stakeholders throughout Southeast Seattle have long deserved a better urban environment than the one that currently exists. The PLUS Committee incisively recognized these facts amidst the panoply of arguments and made the right decision to move forward.