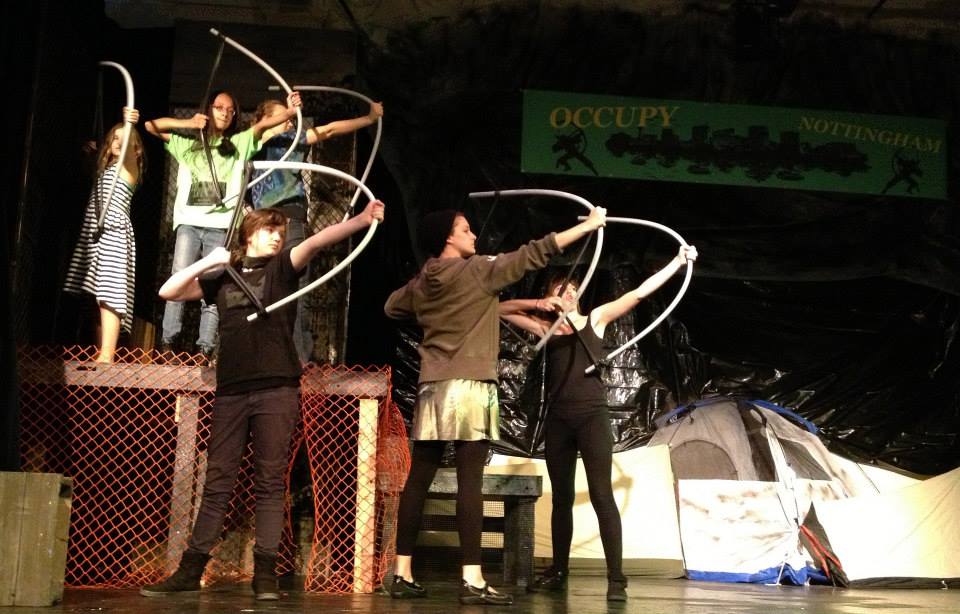 When I sat down with Ellen Cooper, the Executive Director of the Anything is Possible Theater Company, I was excited. Ellen, who also wrote the company’s current rendition of Robin Hood, was in the middle of telling me just why her company was different from all of the other kids’ theaters out there. Her reasons were compelling ones.

Above all, she talked of how the messages in children’s shows are not deep enough. The Anything is Possible Theater Company, she said, sought to bridge the gap between real-life issues and what is deemed appropriate for children.

To this end, she said, Robin Hood is set in the present, where the Merry Men are homeless youth and the Sheriff is an old rich businessman. By recontextualizing an old classic, they are able to grapple with issues that many children in the low-income areas of South Seattle face, while still providing the draw of a time-honored tale. This would then spark discussion in families about topics like class inequality and homelessness. She described Robin Hood as “A relevant show about people’s lives. It demonstrates an active and positive way to respond to what’s happening through community-building”.

Other things about this company also sparked my interest. Ellen mentioned the pay-what-you-can night and low ticket prices, designed to make the play accessible to a low-income crowd. AIP even gave away 40 tickets to Treehouse, a Seattle organization serving foster children. And in a neighborhood where this happens to be one of the only theaters in existence, let alone one serving children, AIP’s community-mindedness was something I gravitated toward immediately.

So, it was with high hopes and a growing excitement that I sat down to watch “Robin Hood.

The play did do some of what Ellen mentioned. The set was a homeless encampment, complete with a “99%” poster behind a chain link fence and a tent upstage. The costumes furthered this concept – the Merry Men were dressed in mismatching, ripped clothing, and the “bad guys” – the Sheriff of Nottingham, his daughter, and the host of barons and kings – were in business attire. From the offset, the stage was set for an interesting take on Robin Hood.

But then… the characters opened their mouths. And out came a jumble of what sounded like terrible Shakespeare. As I struggled to figure out why on earth the characters were speaking like this, I realized that as an attempted throwback to the traditional Robin Hood dialogue, Ellen had decided to write it in a strange approximation of pseudo-Old English. With that, what could have been an insightful look into why Robin Hood is relevant to our time – especially to the citizens of Rainier Valley – became simply a concept smacked onto a play that didn’t really fit.

Ellen’s idea to set Robin Hood in modern times, highlighting the disparity between classes in a way that would resonate with the community’s large low-income population, is a brilliant concept for a children’s show. Using a time-honored classic like Robin Hood to bring audiences in and then showing them a new way to look at it is all well and good. However, if you are going to do that, then do it. Language sets the time period for any play, so to not alter it made what would have been a brilliant commentary into a disjointed modernization of a dated text.

This was just the first of many examples of a half-realized concept. The stage was very narrow, so many of the scenes were conducted in a line. Though some handled their text and movement with ease, too often the scenes played like a presentation. The myriad of accents only added to the issue – we had Irish, British, American, and some odd combinations of the three, which served to confuse the audience rather than create a cohesive world.

For all of that, the show was enjoyable. Adorable children and talented young adult actors made us all smile as they carried out the telling of Robin Hood’s tale with gusto. Broad-sweeping villains made kids gasp and adults chuckle. The ensemble seemed to connect with each other in a way that was endearing, especially with a multi-generational cast. And despite some flaws and my disappointment that the show didn’t completely live up to my expectations, I found myself enjoying the piece.
The Bottom Line: Ellen has attempted to recontextualize children’s theatre by making it relevant and placing it in an area where kids have limited access to art. Although her show does not entirely succeed, her effort to create change and get the children of South Seattle involved in art is admirable. Go support the Anything is Possible Theater Company.

Mary Hubert is a performing artist, director, and arts administrator in the Seattle area. When not producing strange performance concoctions with her company,  the Horse in Motion, she is wild about watching weird theater, whiskey, writing and weightlifting.