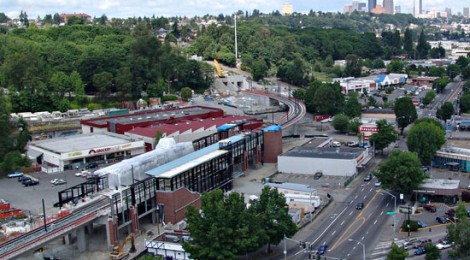 The rezone’s intended effect is to transform an area currently dominated by strip malls and parking lots into a pedestrian-friendly hub of commercial and residential activity. Spurred by a neighborhood planning process that began in 1999 and a design framework developed 10 years later (http://www.seattle.gov/dpd/cityplanning/completeprojectslist/northrainier/documents/default.htm), the rezone is a culmination of nearly 15 years of consideration. It also represents the city’s commitment to fostering growth in areas now served by investments in Link Light Rail. This is a major win for the future of Rainier Valley.

The Future/Back to the Future

Speaking of the future, two other developments stood out at this meeting. The first is Councilwoman Sally Bagshaw’s enthusiasm for further positive changes that can be made to the area, now that the rezone issue has been decided. She cited the original Olmstead Brothers’ plan for Seattle parks (http://www.seattle.gov/parks/parkspaces/olmsted.htm) and her interest in “reclaiming North Rainier’s Olmstead parks and boulevards.” The Olmsteads’ 1903 plan initially called for 20 contiguous miles of parks and green space throughout our city. While the city built out much of this plan in its early years, including space along Lake Washington Blvd and in the heart of Mount Baker, it breaks down into a sea of congestion and concrete along Rainier Ave S. Many area residents have called for the beautification of this area by bringing more of the Olmstead Brothers’ original vision into fruition and making concurrent traffic changes at the intersection of Rainier Ave S and Martin Luther King. They may have an ally in Councilwoman Bagshaw.

The second thing that stood out at this meeting are the opposing votes by the two Councilmembers who reside in Southeast Seattle, Sally Clark and Bruce Harrell. With district-based elections starting next year, both Councilmembers will be up for re-election. Harrell has already registered to run for the district-based seat, Position 2, while Sally Clark is running citywide, for Position 9. Even while withholding all opinions about districting, which I mildly supported/still loosely support, it is nonetheless interesting to note.

Sally Clark voted in support of the rezone, along with seven other Councilmembers, while Bruce Harrell voted against it. In opposing the legislation, Harrell echoed the opponents of the rezone in saying that it shouldn’t occur until the city can identify developers who have an intention to build. “There are no pending development projects contingent upon this planned rezone… It would seem to me that this is when you start talking to the developer community,” he said. Later he also claimed that, he had not heard a single comment in support of a 125 foot height allowance for a parcel currently occupied by Lowe’s Home Improvement.

Both claims came across as strange.As Clark herself pointed out earlier in the meeting, by the time a developer has intentions for an area or a particular parcel, the city is already behind the curve. “The city will not act fast enough in order to change the land use map to make sure the neighborhood gets what it has been asking for.” This seems prima facie evident considering the duration of the current process. The Mount Baker rezone, from the time the city released the 2009 Design Framework, has taken five years to approve. This is just for theoretical development. Perhaps, as Harrell says, the city can wait until developers draw up specific plans. The question is, then what? There is no reason to believe the process will be any less drawn-out or contentious in the future. Furthermore there is a question of whether the city wants to get into the business of micromanaging future development. This is a recipe for years of added uncertainty and chaos, not greater democratic participation.

Harrell’s claim that he has not heard any support for raising the height allowance for the Lowe’s parcel is also confounding, given that he attended the same Planning, Land Use, and Sustainability Committee meeting that many of my neighbors and I did. Some of us, myself included, spoke directly about this issue. Either way, Harrell will find political support among the vocal opponents of the rezone should he run again next year. This may be exactly the point. He appears to have taken a less reasoned policy stance to gain well-organized political backing. Clark took a simultaneously more principled and practical position by recognizing long-standing planning principles and supporting means to ends on which most Valley residents can agree: we needs smarter growth and more jobs. For that she should be commended.