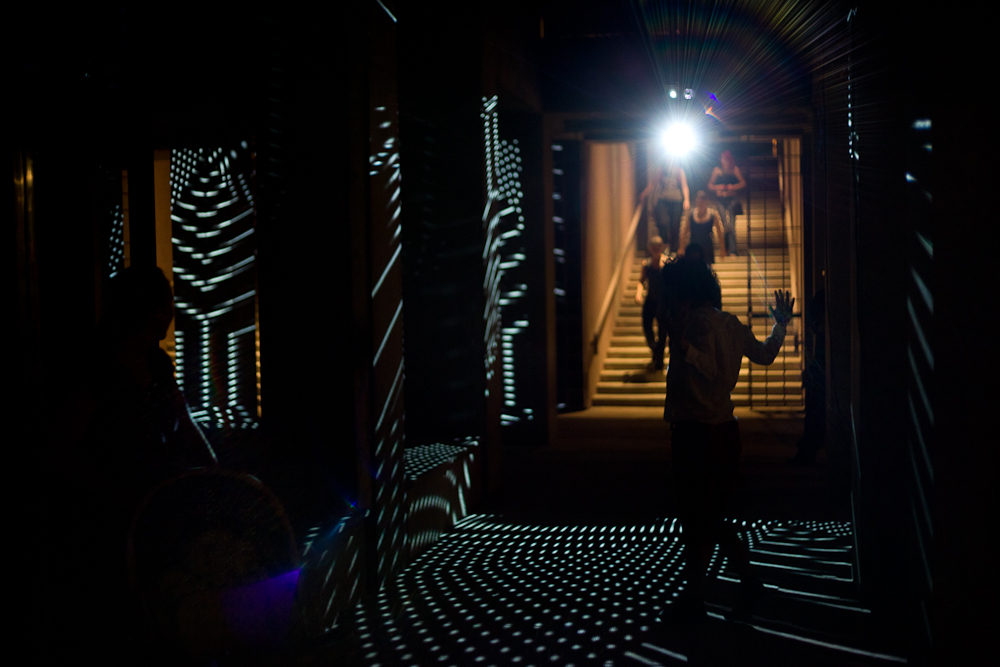 Disjointed electronic music wafting out of large speakers on a crowded stage fills the air of the tiny Royal Room in Columbia City. The small venue is filled with patrons who all crane their necks to see three beautiful young women, moving in synchrony and doing… something… that I can’t quite see. They finish their bit and begin to walk with measured steps behind the stage.

All of a sudden, the conductor, a middle-aged roundish man with glasses and a hat, jerks imperiously toward the trumpet, soprano sax, and trombone in quick succession, 1, 2, 3! The air is suddenly alive with sound. Master musicians play over the computer’s soundtrack as the conductor (and now, I realize, the composer as well) commands them to play when and how he wants, all the while selecting tracks on the laptop in front of him. He raises and lowers his hands, gesturing as if to paint a picture of the sounds that emanate from these master musicians’ instruments. His grotesque facial expressions coax sounds out of each member of the company in such a way that they layer on top of each other, haunting, jarring, and yet a perfect fit.

And all the while, the three women move, doing God-knows-what around the very crowded little Royal Room in Columbia City as film projects across the walls.

This spectacle marked the release of 55: Music and Dance in Concrete, an ambitious piece created by Wayne Horvitz and three others. Designed to highlight the unique visual and acoustic elements of chosen sites, the piece is grounded by an electronic score, comprised of fragments from 55 composed short motifs for chamber music, and 55 pieces from various invited improvisers. Now that this work has been completed, Horvitz, the composer, gathered with a select few musicians and Pendleton House, a Seattle-based group of young artists, to show off a bit of his vision.

Improvised, wacky, at times discordant, the music was above all one thing: spectacular. Live music transitioned seamlessly from electronic, as Horvitz connected with the musicians on a level I haven’t seen before. He would gesture to start them, to stop them, even to illustrate what sound to make.

The three layers of music – electronic, chamber music, and improvisation – fit together in a strangely perfect way. At times, it created a chilling non-music, reminiscent of a dying circus – though uncomfortable at times, it would eventually swell into an epic release of musicality that placed the audience at ease. The musicians were virtuosos, able to follow Horvitz’s strange gestures and expressions with ease. Particularly impressive was the soprano saxophone player, a young woman with bare feet that curled whenever she hit an impossibly high note. Her expression was one of delight as she jammed, jived and riffed over the top of the rest of the musicians with evident mastery of her craft.

The live music would fade occasionally as the three ladies of Pendleton House would begin to move again, creating a call-and-response between the musicians and movers which added to the flow of the piece. And all the while, subtle projections on the back and side walls add to the experience, continuing to tell us story after story in conjunction with the music and movement.

My only complaint was the choice of venue. Crowded and tiny, it made it extremely difficult to see Pendleton House. As a matter of fact, I only got to watch one movement piece in entirety. Though Pendleton House’s work – from what I could see – was interesting, the lack of visibility to what exactly they were doing made me anxious about not seeing them rather than excited by their work. Despite this issue, the work carried through, and I found myself being completely swept away by the bravery and talent of the art made in that little room. I’m already impatient to see – or hear – what Horvitz does next.

The Bottom Line: See this, wherever it goes next, or buy the vinyl – the music alone is incredible, and it is a piece worth listening to.