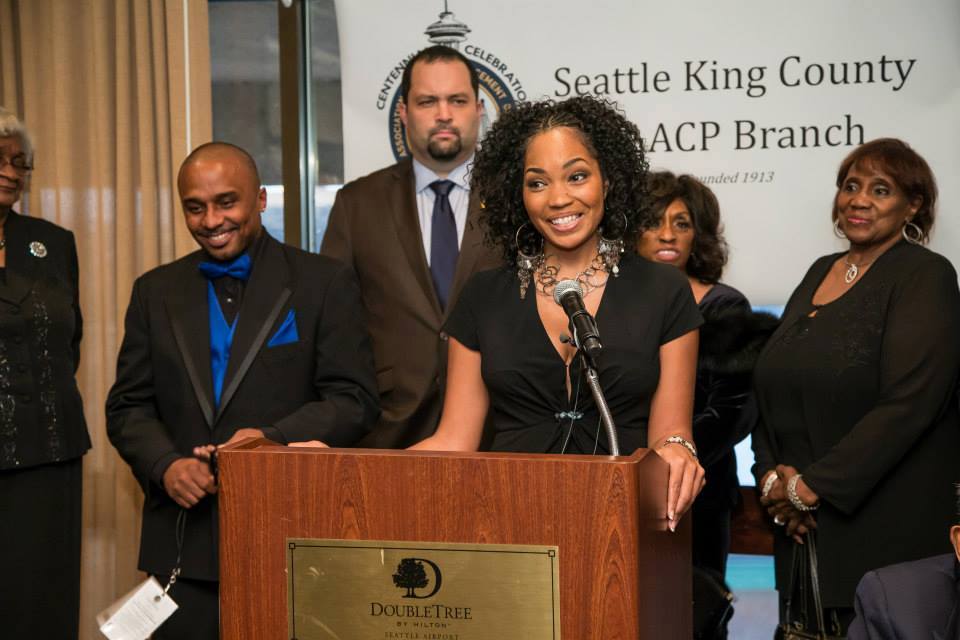 Combating challenges is anything but new to Sheley Secrest. The former N.A.A.C.P Seattle Chapter President, current litigator, and long-time Rainier Beach resident has faced down several in a public service career spent advocating for gender equity, livable wages, and police accountability. Her largest challenge to date looms on the horizon as she vies to emerge from a hotly contested race as the 37th District’s State Senator. However, it is one that the candidate believes herself ideally equipped for.

Emerald: In a race cluttered with Democrats what do you feel sets you apart from the other candidates?

Sheley Secrest: I’m the only candidate who has actually sat down in the rooms with the people that I’m fighting to represent. So, when we’re talking about changing sentencing laws, I was in the jail cell with the 16 year old boy who was being charged as an adult for a non-violent crime. When we’re talking about reforming education, I’m the mother that’s sitting in the front of the classroom who has seen a brilliant little black boy be sent into special education instead of on a track for advanced placement.

When we’re talking about funding for public schools – I’m the advocate who was fighting for Rainier Beach High School when they didn’t have text books because they didn’t have the budget to provide them. That’s what disassociates me. I’m from this community, and though I haven’t advocated for policy on a national level, I’m on the streets, in the homes, and on the blocks of the very lives that are affected.

Emerald: There’s a lot of anxiety in terms of slow job growth and economic development within South Seattle, and the larger 37th District. What ideas do you have for job creation at the state level?

Secrest: I can tell you what I’m doing before I promise you what I’m going to do. Like my grandmother used to teach me: “Don’t promise a better tomorrow, until you can show what you’ve done today.” We have to take that same position in selecting our candidate. Right now I run the job program at the Urban League. It’s Seattle’s first race based initiative, with a particular focus on African-American males. We have a 13% unemployment rate in King County for black men. We have to take an emergency crisis attitude to bring in jobs, and not just survivor jobs, but living wage jobs to our community.

I’m a mother of three and a single parent. The fight for an increased minimum wage in Seattle, while benefiting everyone, most starkly affected African-American women and Latino males. These folks were raising their families off of meager incomes. When you’re talking about the people of the 37th District, 60% are employed in low wage jobs. They subsists on pennies.

In addition to my work for the Urban League, I’m chair of the Economic and Development Department for the N.A.A.C.P, both on a local and statewide level. We have to turn economic development back into a civil rights issue. The plight of the poor getting poorer and the rich getting richer is a civil rights issue. We used to understand that better than we do now. Some have recovered from the recession, but most have not. They’re stuck in low wage jobs. So, how do you fix that?

Let’s look at the Seattle Tunnel Partners and the SR 99 Tunnel Project. That was implemented off of the idea that it would bring in new jobs. $91 million was supposed to go to minority contractors and businesses who would then hire other people of color. The idea was to lift up power from the bottom up, instead of a trickle down. Those were missed opportunities. We have the Department of Justice demanding reform of how Washington State is creating jobs on simple construction projects. It’s those missed opportunities that we have to take advantage of and make sure we’re pulling in people from the bottom up.

Emerald: Per the Washington State Supreme Court’s ruling in the McCleary decision, what are your ideas on adequately funding education for all students in the state, so that a student in Rainier Beach receives a level equivalent to a student in Issaquah?

Secrest: That issue hits directly home for me, as a lot of the Rainier Beach parents were a part of that case before it went to the Supreme Court. Politicians have to make certain that we stop using our children as pawns – kissing the babies before they get elected. We have to make sure that we hold our elected officials feet to the fire and start to demand that they actually fund education. No excuses.To sit there and do nothing is a sin of omission.

How do we get the funding? The first thing we hear is that, “We love our children, and we’d love to educate them, but there’s just no money.” We’ve got to change who we’re currently giving the money to. That means changing tax loopholes. The example would be the classic Boeing tax exemption. They received that exemption under the promise that they were going to create more jobs. We have to make sure that we have state tools to look and see if that promise is being fulfilled. Those who are not doing what they said they were going to do should stop getting a tax exemption.

Other creative ways to fund education is through job creation. If more people are able to purchase things then Washington’s revenue base increases – since the majority of our budget comes from sales tax. If we allow more people to make money by doing things like increasing our minimum wage that’s going to get people back into spending. Right now they’re taking out pay day loans just to cover their basic necessities. There’s no spending going on by the majority of working people.

Emerald: What are your feelings on our state’s current tax structure?

Secrest: We have to change the way we are currently doing things. Right now the burden of taxes in our state falls heavily on the working class. Washington State has the most regressive tax system in our nation. How do we change it? I know that there’s discussions of implementing a state income tax on high income earners that would offset some of the inequities embedded in our system. That’s something we should do. We need to explore and put all ideas on the table about how we can equally contribute instead of forcing the poor to contribute the most.

Emerald: As I’m sure you’re aware, crime and violence in the South Seattle area has been a hot button issue as of late. One of many solutions has been to have an increased police presence in the area, however that’s been an extremely polarizing issue amongst residents. How would this be addressed by you as our State Senator?

Secrest: I believe that every single person wants to make certain that when folks walk out of their homes they feel safe. How do you do that? Everyone believes that racial profiling is wrong and that it should not take place here in Washington State. Even though it is illegal in our state, we don’t have any mechanisms to make sure that it isn’t taking place. The Seattle Police Department has civilian oversight, as does the King County Sheriff’s Department, however we need to also have that at the state level.

Every single person also believes that we should make sure that our officers are well trained. We should give them the tools that they need, so that they can go home and see their families at night. We should be concerned with if they know how to police communities of color? We need to ask questions like: What is their training mechanism? Do they police in a particular area, but live far away where they have limited to no interaction with people of color? Let’s train them so they can. In my work with the N.A.A.C.P we are working to implement state wide solutions for public safety. Data collection and training are just two of the many.

Emerald: If you were elected, what would you want people to be able to say about you once your term was over?

Secrest: She was a pitbull with a smile, and a watchdog giving voice to the issues that mattered most to our community.

Emerald: Being someone who has deep roots in this area, could you pin down your top 3 favorite things about the South Seattle area?

Secrest: 1) Diversity. 2) The fact that the South Seattle area will take on challenges that other areas won’t even touch, such as education reform, which began in South Seattle. 3) The sense of community. We have not lost that!

One thought on “Sheley Secrest: “A Bulldog With a Smile””