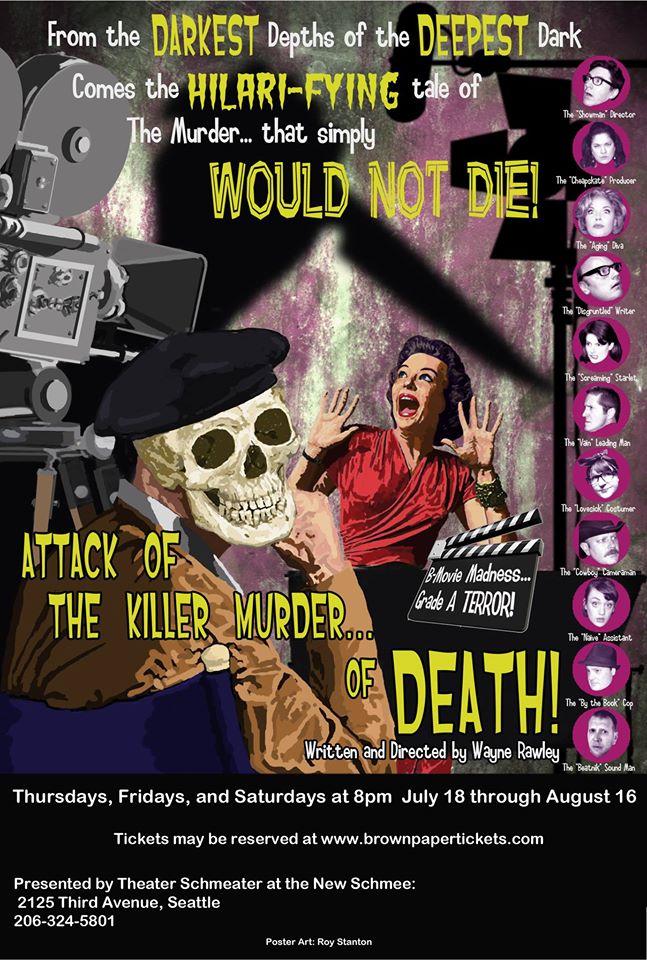 In a vacuum, I’m drawn to cutting-edge productions. I want to see art that makes me think, theater that pushes the boundaries of acceptability, dance that calls into question what is and isn’t movement. Often, I go to the theater to learn, to think about current events, and most of all to find new methods of creating.

Theater Schmeater’s first production in their new space, Attack of the Killer Murder… of Death! did none of this whatsoever.

And yet, I loved it.

The play, written by Wayne Rawley, takes place in an old haunted mansion where a bunch of small-time actors with big-time personalities struggle to produce a truly terrible B-movie horror flick. When their diva dies suddenly and suspiciously, accusations fly and murders abound as the inept performers and crew try desperately to discern who the murderer might be.

I spoke to Wayne before seeing the show, and he said the B movie musical had inspired the world of the play. The play, originally commissioned by Seattle Public Theater in 2014 for a youth ensemble, is, in Wayne’s words, a satirical take on the average not-so-well-written murder mystery. The main challenge, he said, was to create a play that was satisfying within its genre while simultaneously poking fun at it. Remarkably comfortable with directing his own work, he told me that for him, “Directing… is an extension of the writing process”. The backbone of the play, he said, is remarkably simple: It is the search for the truth. The characters, the actors, the audience, the plot – all search for the truth. The goal of the play? To have fun.

He hit the nail on the head.

Although it didn’t change my worldview or radically alter my perceptions of theater, the hilarious writing and mostly competent cast constructed a deliciously irreverent romp through a campy tale of murder, romance, and big personalities set against the backdrop of 1950s movie culture. I laughed. I snorted. And the script capered along through each of its zippy 40 minute acts with so many tricks, turns, and witty one-liners (“What can I say? I’m a sociopath! We don’t always use good judgment!”) that I was right there with Wayne the entire time.

Where the play fell flat was in the acting. Perhaps because of its original cast of high schoolers, the script was written in a way that didn’t require acting gymnastics. Even so, the performances at times felt flat. Even in a campy tale, characters must believe themselves, must be completely invested in their actions. This is where the humor lies. Often, the actors seemed intent on playing the stereotypes that their characters were, instead of playing characters in earnest that just happened to be stereotypes. After all, what diva knows that she is a diva? Though the characters were caricatures, the actors still needed some moments of truth that were lacking.

Despite this, the play zinged along with entertaining rapidity, and I found myself invested in the “Who’dun’it” aspect while laughing out loud at the silly scenarios in each of the three rapid-fire acts. Theater Schmeater lived up to their irreverent reputation – I’m looking forward to their next silly endeavor, especially if Wayne is at the helm.

The bottom line: Schmeater’s newest production is an enjoyable, frivolous romp through an already entertaining genre. Only slightly bogged down by mediocre acting, this show is worth seeing if you’re looking for a mindless guffaw on a summer night. Check it out!