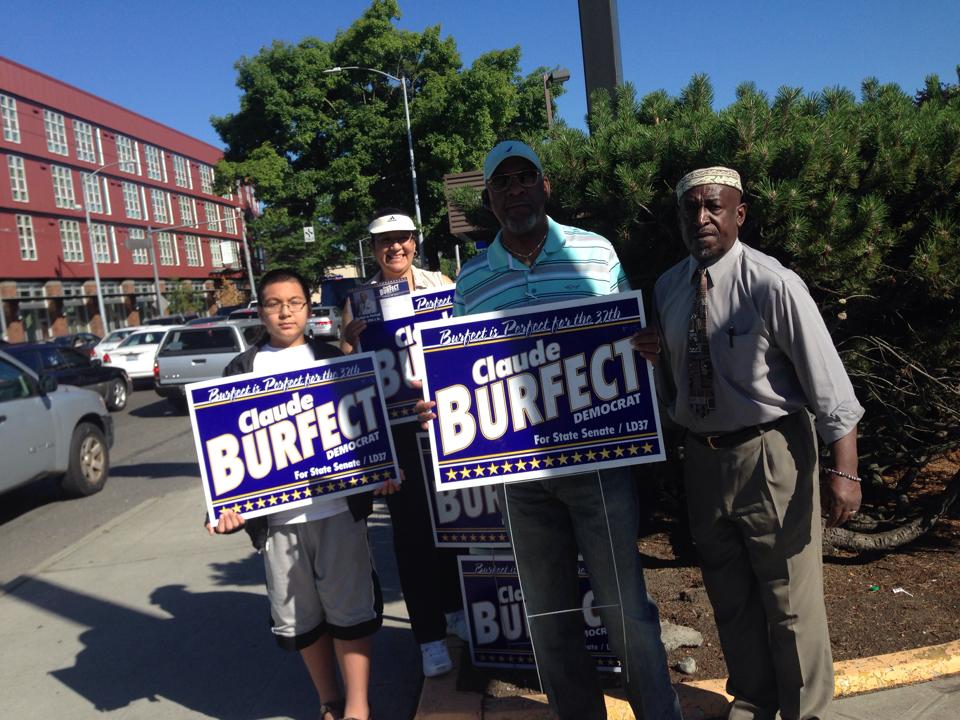 Editor’s Note: This is the last in our series of interviews with the candidates- 5 Democrats and 1 Republican- who are vying to replace retiring State Senator Adam Kline in the 37th District. The top two candidates chosen in the primary election-  held on August 5th-  will continue on to the general- which takes place on November 4th. The winner of which will represent the 37th District in the Washington State Senate. The 37th currently comprises almost the entire South Seattle area.

Claude Burfect’s never been one to sit idly by and wait for others to attend to problems that needed fixing. It is this attitude, forged from his time spent fighting against segregation in his home state of Louisiana during the civil rights period, that the Vietnam veteran and political science major has brought to the task of community organizing within South Seattle. With a track record of impacting local legislation that rivals that of any area elected official, it’s no shock that he’s often taken for one. It is a position he would like to hold officially as he competes for the 37th District’s State Senate seat.

Emerald: You’ve been a community organizer in the South Seattle area for quite some time. Why are you now running for office?

Claude Burfect: What has me running for office is the crime in this district.  I’ve been living here for over 36 years and it’s never been worse. A large part of that is we have a 40 percent black male unemployment rate in the District. When you have that type of unemployment you’re going to get a lot of crime.

Emerald: What are your ideas for addressing both crime and unemployment in the 37th District?

Putting both high school kids and prisoners into apprenticeships, and giving them a trade, allows them to become viable citizens within the community. They become productive taxpayers, and they begin to reap the American Dream. That’s why trades are so important because so many kids who come out of college can barely find a job in their profession. Employment reduces crime and that creates livable communities.

When a guy comes out of prison he has no skills, so what does he do? He re-offends. It’s a cyclical thing. He goes right back into prison because there is nothing else for him to do.  That’s why I’ve worked with a great deal of community youth in making sure that they get a good education, and skills that will allow them to become employed. There is no child that should be left behind.

Emerald: What conversation do you have with businesses to entice them to come to South Seattle?

Burfect: First and foremost, I’d tell them that this is a thriving area with a great deal of opportunity. Let’s focus on an area like Skyway where I happen to live. There aren’t as many businesses there as there used to be, so people in that area are usually forced to go to Rainier Beach or Renton to shop. However, there is a great opportunity for anyone who wanted to come in and open stores to scoop up all the people from Skyway, West Hill, Lakeridge and the surrounding areas. Who wants to drive far away when you have something right next door?  I would love to see a shopping plaza in an area like that. Despite what some people have said, we have the market for it here.

I wanted to also say that I would like to make sure that African Americans play a huge part in the businesses that come back to the community.

Emerald: You have been adamant that Washington State’s tax structure is extremely unfair, especially to low and middle income earners. What ideas do you have for altering it?

Burfect: I wanted to say that I’ve been the initial advocate for a state income tax on the top 1% in Washington for as long as I can remember. It wasn’t until fairly recently that all of the other candidates in the 37th race, with the exception of Rowland Martin, jumped onboard with me. It wasn’t so long ago that they were all afraid to talk about it because it failed the last time it was put to a statewide vote.

The fact is, we are one of 7 states in the country that does not have a state income tax. Again, I’ve advocated for and also been employed on putting the logistics of one together. I believe that if the last state income tax bill that was put to a vote had been written in language that appealed to the people we would have it today. Bill Gates, Sr. (who led the support for a state  income tax) wrote it in a way that was anything but.

Emerald: In such a packed race what makes you stand out from the other candidates?

Burfect: Out of all the candidates I am the one who initially spoke up about how to address crime and our income tax structure. Everyone else was silent about them until after I said something. These are issues that I’ve been dealing with long before I decided to run.

Over the last 15 years I have been to almost every single legislative session that has been held in Olympia. I honestly have a better attendance record during the three month sessions than most of our current elected officials.

I’ve also been organizing the community for a long time. When the Senate Bill 5541 came down, which was going to close Rainier School along with other institutions, I organized the community to fight against that bill,  and we ended up defeating it.  I know how the legislative process works. As an organizer, I’ve done that, been there, and seen everything.  So I feel that my lobbying knowledge gives me an upper hand on everybody.

Emerald: Assuming that you’re elected what would you want someone to be able to say once your time in office was up?

Burfect: I want them to say first and foremost that he worked for the constituents and not for any other interests. That he was a doer, and not a promiser.

Emerald: You’ve lived in New Orleans, which is known as one of the most vibrant places on earth, but you’ve chosen to make South Seattle your home for much of your life. What is it about the area that is so special to you?

Burfect: South Seattle is a place where I’ve found a home. I’ve lived in Beacon Hill, and now  Skyway. What’s so special to me is how vibrant this place used to be. I would even say that it was more so than New Orleans at times. The community of South Seattle has gone through some rough patches in recent years, but what remains special about it is that we can recapture that vibrancy if we commit to doing it.