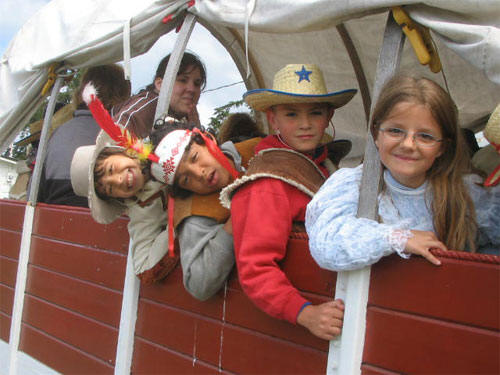 For one unforgettable day wide open frontiers, mammoth steeds that galloped directly out of a Sergio Leone Spaghetti Western, and stagecoaches loaded to the brim with cowhands who made liberal usage of the expression “Yee Haw,” delighted the children of R.A.Y’s West Hill Family Center’s Youth Counseling and Therapy Program as they made the Wild West their playpen.

Last Wednesday over 60 mostly elementary aged youth and their families joined with the counselors and therapist of the Center – located in the Skyway/ West Hill neighborhood-  in venturing to Whidbey Island to experience Cowboy Camp at the M-Bar-C Ranch.

The ranch, owned and operated by The Forgotten Children’s Fund, specializes in supplying a full Old West Adventure – complete with Wild Frontier era replica town that includes a jail, vintage cowboy costumes for anyone who left their spurs and chaps at home, and horseback riding on full size stallions – for groups of children with special needs who rarely deviate too far from the confines of city life, so, as the ranch’s mission statement reads: “They can have the opportunity to be the most kid they can be.”

This opportunity appeared to be welcome by the Center’s children as all are currently undergoing some form of counseling for reasons that include physical abuse, parental neglect, and anxiety issues, as it acted as  a much needed respite from the heaviness of many of their personal situations.

It was with this context that the young city slickers unabashedly embraced the country atmosphere according to Center Director Morgan Wells, who was decked out in full cowgirl regalia for the day and at one time found herself locked up in the town’s prison by a five year old deputy. (She would not reveal what she had done to warrant such an act.)

“The kids really had a blast! They were really excited about everything they did during the day – from getting on  these large horses, as the ones who had ridden before had only ever done so on ponies, so they kept commenting about how big they were.They also loved dressing up as cowboys and doing all the arts and craft activities that the volunteers led them in. At the end of the day I asked what everyone’s highlight was and there were just so many. The kids loved their time at the ranch!”

The trip was made possible by a generous local benefactor who paid all expenses associated with the children, their families, and the Center’s staff attending the day long camp. A gift that amounted to several thousand dollars and was made primarily because the donor wanted the kids to share in the unique experience he felt the ranch afforded.

Though the trip to Whidbey provided an opportunity for the youth to venture out from their familiar urban surroundings, possibly the biggest, and most enduring, benefit of the day was that it provided a much needed bonding experience for them as they often times face feelings of alienation and ostracism that come from participating in therapy at such a young age.

“The coolest thing about this event was that during the year we mainly work with kids one-on-one, so much of the time they never meet each other, or even see each other, unless they’re passing by in the waiting rooms. Otherwise, they don’t get to build relationships.” Wells said.

“However, by the end of the day today I watched some moms exchange phone numbers so they could do playdates because their kids really hit it off. I saw a grandmother invite some of the other families to her church for an activity that she’d doing this week. There was just some really nice relationship building between the families who come here, and I think that’s really special, because it gives kids the feeling that they aren’t alone. Now they can think: ‘I’m  not the only kid around here who needs counseling or needs someone in my life.’ Everybody on the trip needs counseling for one reason or another, and yet today no one could tell them that weren’t just a bunch of typical kids.”