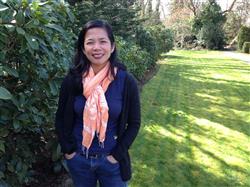 The interactive art installation invites people to consider ways race, nationality, gender and other categories are used to limit and divide people. “We all deal with forms that ask us to check boxes about ourselves,” says del Rosario. “A lot of times, those boxes don’t fit or, if we check them, that information may be used against us.”

Del Rosario explains that she created her Passport Series to provide people with a different experience. She re-framed typical application questions and participants use their own words to describe the most important parts of themselves. She takes their answers and their portraits and assembles them into individual booklets that resemble travel passports.

At the Rainier Beach Art Walk, people can view over 20 completed booklets, and participate in the project by having their portrait taken and completing one of del Rosario’s application forms. These will be added to the growing series, some of which will be featured at an upcoming exhibition at the Wing Luke Asian Museum.

While del Rosario has been working on the series with individual friends since 2013, this is the first time she will be doing it as a participatory public installation.

“To move forward in addressing civil rights and discrimination, we need to have opportunities where people can wrestle with ideas about identity in a broader context,” she says. “I want to provide a safe and creative space for people to reflect on their own struggles with identity, perhaps see things they have in common with someone completely different from them, and have an opportunity to present themselves in a more holistic way.”

Del Rosario’s “Passport Office,” at booth number 13, will be open from 10 am to 6 pm, Saturday, Sept. 6, 2014 during the Rainier Beach Art Walk. Spanish, Vietnamese and Somali interpreters will be available to assist people from those communities who want to participate in the project. Funding for the Passport Series is provided, in part, by the City of Seattle’s Office of Arts and Culture.