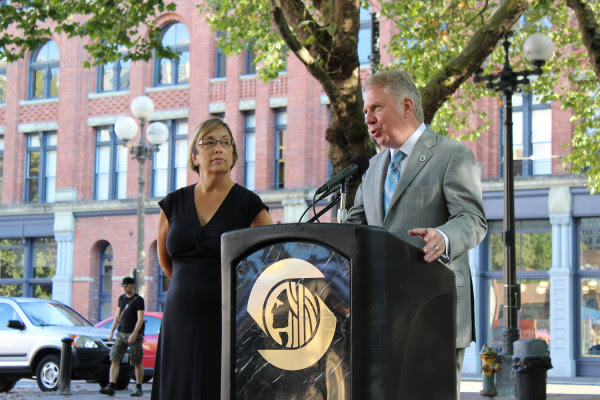 SEATTLE  – As parents ready their kids for the first week of school, Mayor Ed Murray yesterday unveiled his plan to reorganize the city’s education and support programs into a new Department of Education and Early Learning (DEEL), the first of several proposals the mayor will make in his first city budget.

The new structure will enable the city to better coordinate existing work and resources on behalf of students of all ages, improve collaboration with Seattle Public Schools, colleges and child-care providers, and increase performance measurement of the city’s work to support educational outcomes.

“Equity in education is the foundation of our democracy and the future of our city,” said Murray. “The City already supports programs across the continuum from birth through college, but we must do better to align resources for better outcomes for education. We will sharpen our focus on achieving great outcomes for all, so that none of Seattle’s students are left behind. We want Seattle to be the first city in America that eliminates the achievement gap.”

Economic disparities contribute to a persistent achievement gap in the city of Seattle between the educational attainment of students of color and white students- especially in South Seattle, which houses one of the largest swaths of the city’s African American and Latino populations :

The Mayor stated that research has shown that students with higher educational attainment have higher average earning power over a career, but also live healthier lives.

“All of Seattle’s children must have the same opportunity to succeed in school and in life,” said Brianna Jackson, Executive Director of the Community Day School Association. “By improving coordination across the entire system, from Early Learning to our universities, and by working together as an education community, we know we can achieve better outcomes for all students.”

Last fall, the City Council adopted a budget action asking the mayor to develop a proposal to elevate the city’s emphasis around education. The council voiced interest in aligning the city’s education and early learning programs, preparing for a universal preschool program, and improving collaboration with the school district.

“Twenty babies are born in Seattle each day and each one deserves a strong and fair start,” said City Council President Tim Burgess.  “We know that high quality education empowers children of all backgrounds to lead healthier and happier lives and their success makes our city stronger.  To enable our cradle to career programs to work better, the Council called for the creation of this Department and I applaud the Mayor and his team for doing the hard work to get the job done.”

For the last several months, the Murray Administration has been working to shape the new department responsible for supporting early learning, K-12 and higher education in Seattle. Most of the positions in the new department would be filled by existing city employees moving from Seattle’s Human Services Department, Office for Education and other organizations. Existing functions consolidated into DEEL will include:

Nine new positions would be created to step up coordination with area colleges and universities, ensure the quality of city child care programs and pre-schools, and increase data collection to track the effectiveness of the department’s activities.

“We look forward to working with the Mayor and the new Department of Education and Early Learning to partner on behalf of our Seattle students,” said Dr. Larry Nyland, Interim Superintendent of Seattle Public Schools. “As we head back to school tomorrow, our teachers, principals and staff are getting ready to ensure every student has the opportunity to graduate prepared for college, career and life. We cannot do this work alone. We are pleased the city will partner with us to meet our goals for student success.”

The new department would house 38 employees and manage a budget of $48.5 million, including $30 million each year from the voter-approved Families and Education Levy.

The mayor’s proposal will be included in his budget submission to the City Council on Sept. 22nd.

One thought on “As South Seattle Heads Back To School, Mayor Proposes New Early Learning Department”