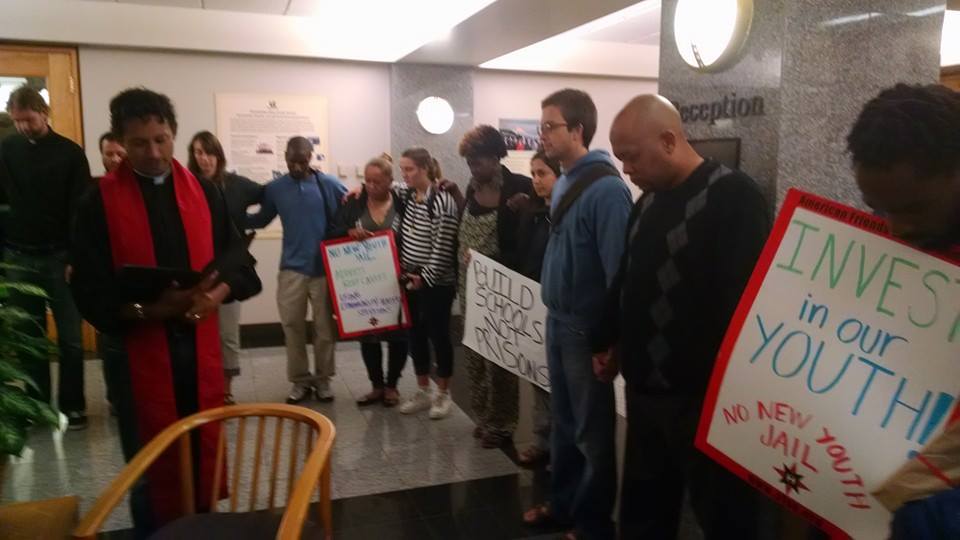 Christians bound in solemn prayer with Muslims. Jews and Gentiles with arms interlocked in solidarity. In a world of ever increasing religious polarization those scenes may seem producible only by a literal act of God. However, on Tuesday such was the reality as a diverse assemblage of religious leaders gathered together to march on the King County Courthouse, located on 3rd Avenue and James, to protest the building of the controversial King County Youth and Family Justice Center.

The $210 million Center’s construction was funded by a levy initiative passed by 53% of King County voters in 2012, and has since become a tinderbox of controversy in the South Seattle community. Many of its members view it as a pernicious perpetuation of what they feel is an already harrowing juvenile justice system. A contention that resonated with several of the clergy members in attendance.

“This is important to me because I think it’s at the core of what Christ was talking about in the Gospels- justice for those that are oppressed and release for those who are imprisoned unjustly. It’s the core of the gospel to have equity. Us being here is trying to embody that message, that we’ve heard Jesus talk about.” Said Brandon Duran, an Associate Minister with Plymouth Church UCC.

The multi-faith protest was the brainchild of Rashaud Johnson, a local teen and member of Youth Undoing Institutionalized Racism (YUIR), who wanted to show that the issue of youth incarceration was a cause that unified all religions that purported to stand against social injustice, irrespective of contrasting doctrines.

“This is a justice issue. And as a  people of faith, if it’s a justice issue, it’s a faith issue. So, this protest is putting feet to our faith, about the intrinsic worth of every individual,  be they black, white, young, old, or whatever.” stated Masha Williams, Pastor of the Eastgate Congregation in Bellevue.

The collected clergy – whose affiliations seemed to comprise an entire Religious Studies course syllabus, and included Christians, Muslims and Transcendentalist-  were joined by dozens of youth advocates as they temporarily encamped on the Courthouse’s 12th floor, forming a circle that stretched from hallway elevators to just a few feet away from King County Councilmember offices, as they engaged in 15 minutes of silent prayer.

As curious onlookers, including some King County Council Members, glimpsed  the sight of heads bowed and hands clasped in prayer they were also privy to signs that read, “Invest in Education, Not Incarceration,” as they made their way passed the group.

The protesters’ goal was to shift the attention of council members to the issues the protesters say are at the forefront of the Center’s development – including a broken juvenile justice system that dis-proportionality imprisons youth of color- and in doing so, hopefully make County decision makers reconsider constructing the Center.

Similar actions were successful in halting development of a youth detention center in Baltimore, MD.

“I would hope that the powers that be, rethink their perspective on this. This is such a backwards way of dealing with this entire issue of youth violence. It’s very reactive. It just makes more sense to put more energy on the front end (in schools and education), and to help youth succeed and be successful whether than locking them into this box.” Said Tara Barber,  a pastor with the United Church of Christ, in response to what she hoped the protest accomplished.

While it is too early to conclude as to the impact the protest had on county decision makers, the faith leaders who participated in the protest viewed their efforts, whatever the outcome, as a religious obligation.

Offered John Helmiere, pastor at Valley & Mountain Fellowship: “My faith calls me to have greater imagination than what the County is planning to do. Their imagination seems to be that things are only getting worse and we should build bigger, larger prisons to incarcerate our youth, while I think we’re called to have an imagination about the potential and possibility of our youth. I believe that we should be investing their potential rather than guarding ourselves against their danger.”

One thought on “Faith Leaders Protest Against “Youth Jail””