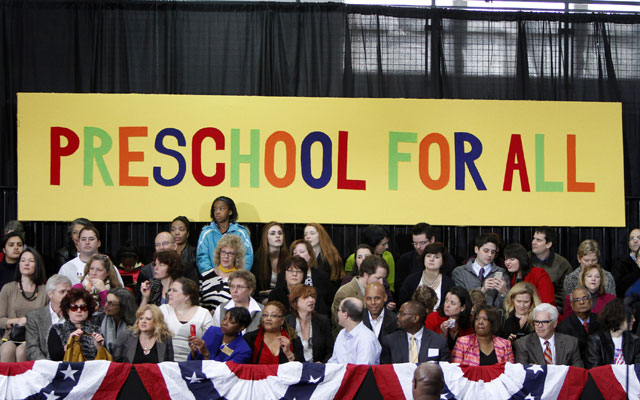 There’s a plan afoot to make sure 3 and 4 year olds in Seattle have access to affordable preschool.  What great news!  Families struggle to get care for their kids, and science tells us it is crucial to offer rich learning opportunities during these years.  Unfortunately, things aren’t as straightforward as they seem.

Access to preschool on a sliding scale is needed and important.

This plan was created by the city’s staff and paid consultants, while intentionally excluding the true stakeholders.  We know from experience that when collaboration does not occur, there is less of a clear shot at success.  That doesn’t mean it will fail, but it is more likely to.  The teachers, organizations who serve young children, and others who stand to be most affected by this plan are understandably upset that they have not and will not have a place at the table.  Someone needs to take the reins, but excluding people and entities whose work will either make this fly–or not–is the opposite of leadership.

The American Federation of Teachers and Service Employees Union International 925 have been working for a dozen years with early childhood educators to help them build an organizational voice in order to secure a living wage and job stability.  They have a plan for early childhood education. It covers birth on up, not just ages 3 and 4.  Probably politically driven, our city’s leadership has made some pretty slimy moves to ace them out of the picture.  From the look of it, it is all about who is in control.

This is disturbing, coming from what one would think is the most progressive city leadership, in a country which now has a pervasive climate of union busting.

The work of AFT and SEIU 925 laid the groundwork for Yes for Early Success, which collected 30,000 signatures to place an early childhood learning initiative on the ballot.  This initiative would provide preschool teachers with a training hub so that they can stay up to date on their profession’s best practices.  It would also phase these workers in to the $15 minimum wage more quickly, and give them a voice in determining how the program runs.

In contrast, get this:  The City would require all of the early childhood educators to get a 4 year college degree, with the exception of assistants, who would only have to have a two year degree. Where are these minimum wage workers going to get the time and money for this?  And why put such an onerous burden on them?  This is even more of a head scratcher when you realize that 38% of preschool assistants leave the profession in the space of a year.  Also, strangely, under the City’s plan, every family that enrolls is eligible for some amount of subsidy.  This would give scarce city money to some of the richest families on Earth, should they decide to enroll their kids.

It gets weirder. The city budget office created a memo fallaciously predicting the AFT/SEIU plan would incur costs calamitous to the city budget. Someone (likely a council member) leaked the memo to the press. The Seattle Times credulously used it in an editorial slamming the AFT/SEIU initiative.  But when the unions asked to see this memo to rebut the bogus claims, they were told that it is still covered by attorney client privilege.  These same predictions of budget destruction are being made to pit local trade unions against the plan.  These guys are being led to believe their livelihoods are threatened by day care workers.

But wait, there’s more. Tim Burgess and Mayor Murray are attempting to muscle the AFT/SEIU early childhood education initiative out of the way by making sure a competing initiative is presented on the ballot as either/or rather than complementary, muddying the waters as voters must choose between the two.

I am a voter, and here’s what I would choose if I could:  I would choose to be represented by elected officials who are motivated by service, not power.  I would vote for collaboration and effective leadership.  Not this nonsense.  Let’s hope kids can get a little preschool despite this mess.

Sandra Vanderven is a Community Organizer and Board President of the Backbone Campaign.

2 thoughts on “Civic Salvos: Pre-School for All, Maybe…”