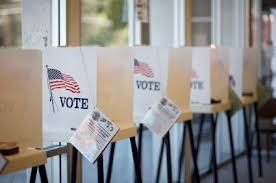 It’s rough out here. But people aren’t protecting themselves with their best weapon. Not only are people the world-over dying to have access to this weapon, people in this country are dying because the weapon isn’t being used.

The weapon? The Vote.

It’s getting a lot of attention lately. Not enough attention, in my opinion, because it is indeed a matter of life, liberty and the pursuit of happiness. Or at least a matter of life and death.

48 years after passage of the Voting Rights Act, last year the US Supreme Court severely weakened this landmark legislation. Since that time, red state after southern state enacted limitations and barriers to prevent people from voting. Those most affected are, of course, the poor and people of color. It is an outrage that the same country ostensibly led by those fighting for democracy planet-side watch gleefully while hundreds of thousands of African Americans are culled from voter lists. Presidential aspirants claim allegiance to the myth of voter fraud in celebration of such discriminatory actions.

But the real tragedy, the appalling, horrifying, head-slapping, the what-the-HELL-are-you-thinking Act of Idiocy, is that tens of millions of American Citizens let this happen because they don’t vote. They don’t even register to vote. And when that happens, shit happens.

Ferguson, Missouri. You’ve watched the video. Heard the heartbreak. And while political and partisan divisions are rife throughout the country, the greatest division is that which comes between the voting population and those who are elected. Those who cast their vote hire the police chief, the city prosecutor, judges. Ferguson is 67% African American, yet the mayor and five of six city councilmembers are not. In Ferguson, only 6% of African Americans actually cast ballots in that last election for mayor and councilmembers. Six is the age a first-grader learns that they have rights in this country. It should not be the percentage of people who cast ballots.

As the Federal Department of Justice investigation of Seattle police actions under different mayors and police chiefs indicate, shit happens here in Seattle too. In 2013, voters city-wide had enough of Mayor Mike McGinn’s obstructionism in regards to the DOJ’s decree and demand for police reform. They tossed him out of office. But voters in the Rainier Valley overwhelmingly supported McGinn’s re-election. Say wha….??

These past few years, there has been great “discomfort” in the Rainier Valley with many of the actions of City leaders, whether it is in zoning and other land decisions, transit and transportation issues, proposals to increase rents in public housing, and more. People are posting and protesting. People are screaming or stalking out of meetings in silent disgust. People are fomenting and frothing about this action or that apparent inaction. But what people are NOT doing is voting.

According to the Washington Redistricting Commission, each legislative district holds 137,235 residents (that’s the state’s population of 6.7 million divided as evenly as possible into 49 legislative districts. But here’s a problem: only 58% (80,710) of our people in the 37th LD are registered to vote. In comparison, a whopping 74% of those in the 36th LD, which includes Queen Anne, Magnolia and Ballard are registered to vote. Any guesses why they get attention from city leaders?

It gets worse. Fewer than 25,000 people in our district voted in the August primary. 30% of registered voters. But the math works out so that just 17.7% of the people who live here cast ballots.

But wait. There’s more. Census figures show that 25% of the entire population in the Southest Seattle area is African American. Yet fewer than 5% of our registered voters are African American. And those who cast ballots? Do the math. We are far, far worse off than Ferguson. Similar patterns are spread across many of our racial groups.

But the good people of Ferguson have armed themselves. They are gathering the most important weapons in this country. Since Michael Brown was murdered on August 9, voter registration booths have sprung up throughout the city and surrounding neighborhoods, registering nearly 3,500 people in a town of 21,000.

Southeast Seattle: arm yourselves. Use your weapon.

Register to vote online before midnight October 6, 2014 at http://www.sos.wa.gov/elections/myvote/

Or, register to vote at the counter up until Monday, October 27 in person at King County Elections, 919 Southwest Grady Way in Renton, and.

Don’t yell. VOTE. It scares the Hell out of those who want to take away your rights.

Cindi Laws is a resident of the Rainier View neighborhood and a long-time activist.

One thought on “Emerald in the Rough: Arm Yourself”