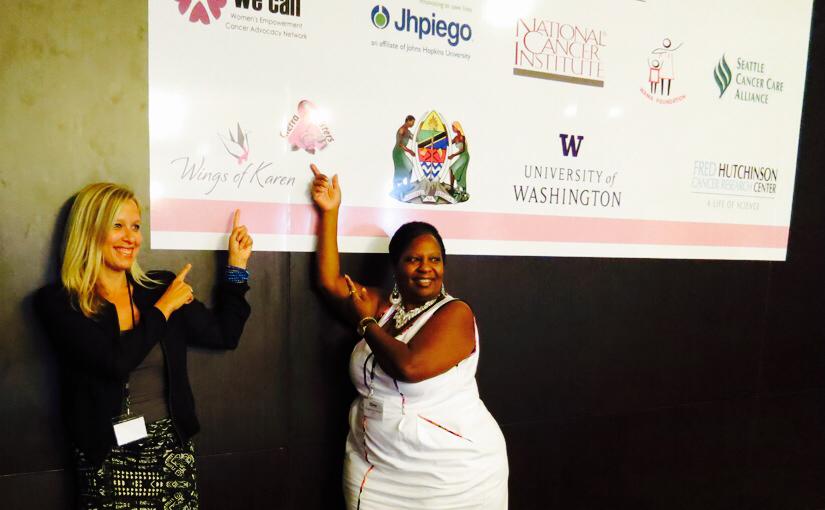 Bridgette Hempstead grimly recounts the day -19 years ago -she was diagnosed with breast cancer as vividly as if the doctor were standing in her office at Skyway’s Cynthia A. Green Family Center and had just delivered the horrid news mere seconds ago.

At the time she faced what appeared to be certain death with limited knowledge of the disease that now contaminated her body and what resources, if any, were at her disposal to fight it.

Had it not been for her pesky intuition, which led her to insist her doctor perform a mammogram, Hempstead’s cancer would actually have remained undetected  for years, continuing to devour her body’s healthy cells unabated.

“My doctor initially gave me a litany of excuses as to why I didn’t need one as a woman in my mid- thirties. However the main reason she kept coming back to was that because I was African American it was unnecessary for me to worry about breast cancer,” Hempstead says, shuddering as she contemplates the alternate pathway her life could have taken. “I’m just so glad that I followed my intuition and didn’t wait an additional ten years to have one performed like she suggested.”

While it is true that on average African American women are diagnosed less frequently than their Caucasian counterparts, breast cancer stubbornly remains the most common form of cancer  they are stricken with. Just as obstinate is the mortality rate amongst African American women with the disease, which is 41% higher than that of white women.

Reciting these facts typically forces Hempstead into a rage spiral as she feels that the misconceptions about breast cancer and African American women that persists in the medical field mightily contribute to discrepancies in the initial diagnoses and level of care received between white and black women.

“I really think that the media deserves a lot of blame for the unfounded perceptions people have about breast cancer. It wasn’t just my doctor, but, as silly as it sounds now, I even believed that I couldn’t get breast cancer as it only effected white women. It’s unfortunate to see how little that thinking has changed when you talk to many medical professionals,” says Hempstead.

With the confirmation of her cancer detonating this false assumption, Hempstead was sent into a state of shock. Fortunately that disposition lasted only a few days as having two toddlers at home meant limited time for paralysis. So after accepting her plight, the southender decided to do what anyone who has spent a sliver of time in the presence of the woman whose grandchildren affectionately call her Daboo knows is as characteristic of her as unabashed narcissism is of Kanye West – she got going.

“Giving up wasn’t an option for me. I’m a person who believes that everything happens for a reason and I said: Okay you’ve been handed this, but you know what? If I’m going down I’m going down fighting,” says Hempstead, who scoured her native South Seattle area from pillar to post only two days after her cancer was confirmed in a fruitless search of support groups.

“I was facing something that I couldn’t imagine going through by myself, and I knew that there had to be others out there in the southend who were dealing with something similar. I just thought that it was a grave injustice that all the resources for cancer victims seemed to be on the other side of the I-90, which included the best doctors, medical staff, counselors, and pretty much everything that communities of color rarely have equal access to, which honestly is the main reason that black woman have such a high death rate from breast cancer.”

The facts would seem to square with Hempstead’s assessment, as the Susan G Komen Foundation- the United State’s largest breast cancer organization- cites a lack of access to adequate health care, and infrequent doctor visits as factors that contribute to poor prognoses and late stage detection in African American women.

Already facing a daunting battle for her life coupled with radiation treatments that, as she puts it, left her feeling like she had been in a 30 round brass knuckle boxing match with Muhammad Ali and Mike Tyson taking turns pummeling her into the ground, Hempstead, completely disgusted with what she felt was an inequitable health care system elected to wage another to combat what she felt was an inattentiveness to the needs of women of color in the southend suffering from breast cancer.

Starting off as an informal meetup only two weeks after her diagnoses, she formed Cierra Sisters to function not only as a support group where women in the community could bond around their shared experience, but one that would also eventually provide them with access to top oncologists, and the entire South Seattle community with educational resources that accurately relayed the risks of breast cancer to women of color. The Cierra, in Cierra Sisters, not so coincidentally means knowledge in Swahili.

“People said I was crazy, that I was literally crazy because this community would never be interested in what I was attempting to do, either because of pride in not wanting to admit that they were struggling with cancer or out of indifference. If I had a dollar for every time people told me my little organization would fail Bill Gates would be looking up at me on the Fortune 500.” laughs Hempstead.

During Cierra Sisters’ early years, when Hempstead served in the capacity of “all of the above”, it appeared that the naysayers had been prophetic as the organization was plagued with biblical streaks of bad luck.

“I think about those early days and it was God that really got me through. There were times that everything I was doing seemed so thankless.” recalls Hempstead, referring to situations such as those that saw local groups partner with the adolescent organization for fundraisers, under the auspice that they were raising money for “breast cancer,” only for Cierra Sisters to be completely cut out of any donations collected during the festivities. This after exhausting their meager budget on marketing for the event-most of which came directly out of her own pocket.

Hempstead even received an ornery letter from a foundation, after applying for funding, that stated her, “grant writer was beyond lousy and must only know English as a second language,” which also contained the unsolicited advice that it would be better for Cierra Sisters to cease as a “going concern.”

However, Hempstead- ever drained- maintained optimism that what she was endeavoring would eventually meet success. “I had to ask myself, who was I doing this for? Was it just for me or was it for those women who needed the support. Had it just been for me I wouldn’t be talking to you right now, because it wouldn’t have been worth all the aggravation,” she sighs.

After withstanding a cascade of negativity and setbacks throughout its formative years, the organization could presently not be flying higher, as meetings that once consisted of only Hempstead and a few infrequent stragglers whose primary reason for attending was to partake of the free food offered, are packed with women who have formed an unbreakable kinship with one another, viewing Cierra Sisters as essential “emotional” therapy that coincides with whatever other treatment they might be undergoing.

“Cierra Sisters is my life line to hope, and an example of how humans should support each other. It is very important to have a support system during  time of pain and suffering, but they go beyond that. They’re family to me,” Says Shayla Richardson, a member of Cierra Sisters.

The organization that at one time was told it was flirting with fantasy to ever think it could appeal to African American women has now expanded into a network that spans the country. Its founder has received both national and international honors for her work on breast cancer awareness and is heavily sought for her expertise in developing methods to bring greater focus to the disease in communities of color.

Hempstead- who recently returned from a speaking engagement in Africa-  is still incredulous that the group that early on barely had enough money to print educational flyers to distribute to the neighborhoods of Othello, Rainier Beach and Skyway, now routinely conducts  informational health workshops in the southend along with their partner organizations, Fred Hutchinson Cancer Research Center, Seattle Cancer Care Alliance and Swedish Medical Center.

There latest workshop, Families Coming Together: What Sisters Need To Know For our Families Today, precedes national mammography day and will take place this Saturday, October 11th at New Holly Gathering Hall.

“Bridgette just does everything for members of the Cierra Sisters. I’ve seen her accompany survivors to their weekly doctor’s visits, and provide counsel to all who call. She sits on health boards, she flies to other countries to speak out on breast cancer’s effects on black woman.” says Arthur Walker, who has been volunteering with the group since 2005.

Even as she could not be prouder at her organizations ascendance, Hempstead- who despite a couple of scares has been cancer free for the past 7 years- admits that her work can often be emotionally taxing, especially when a Cierra Sister succumbs to the disease.

“Dying prematurely is never fair, for either the person or their friends and family. Last year we had two deaths a month in our group. It was extremely tough to continually have to say goodbye to people you had become so close to,” shares Hempstead.

“Bridgette sat with women as they’ve passed on, flown bodies to other states to waiting families, comforting them once she arrived, and building a bond that last to this day,” adds Walker.

As the organization settles in on 15 years of existence as a non-profit, this month- which just so happens to be Breast Cancer Awareness Month- may be its most monumental, as not only has it received unprecedented media attention from several media outlets, including KUOW,  KIRO, KOMO and KING 5 news (she will be appearing later today on New Day Northwest), but Cierra Sisters was also named the Seattle Seahawks (yes those Seahawks) charity of the month, with the team bestowing a minimum donation of $20,000 to the southend nonprofit .

However, the biggest honor – at least for any person who self-identifies as a “12th man”- that comes with the distinction is that Hempstead will be singing the national anthem during this Sunday’s game at Century Link Field against the Dallas Cowboys.

“From where we were to where we are…” she  says,wistfully reflecting on the journey that has brought her to where she is today. And even as her dream has finally been actualized, she seems to just be gathering steam.

“In going what I’ve gone through, you learn to look at every day, every single one as if it is a gift. And gifts are things you don’t easily discard. You appreciate them to the fullest. It took me facing death to learn how to live life. I feel mine has just begun!”