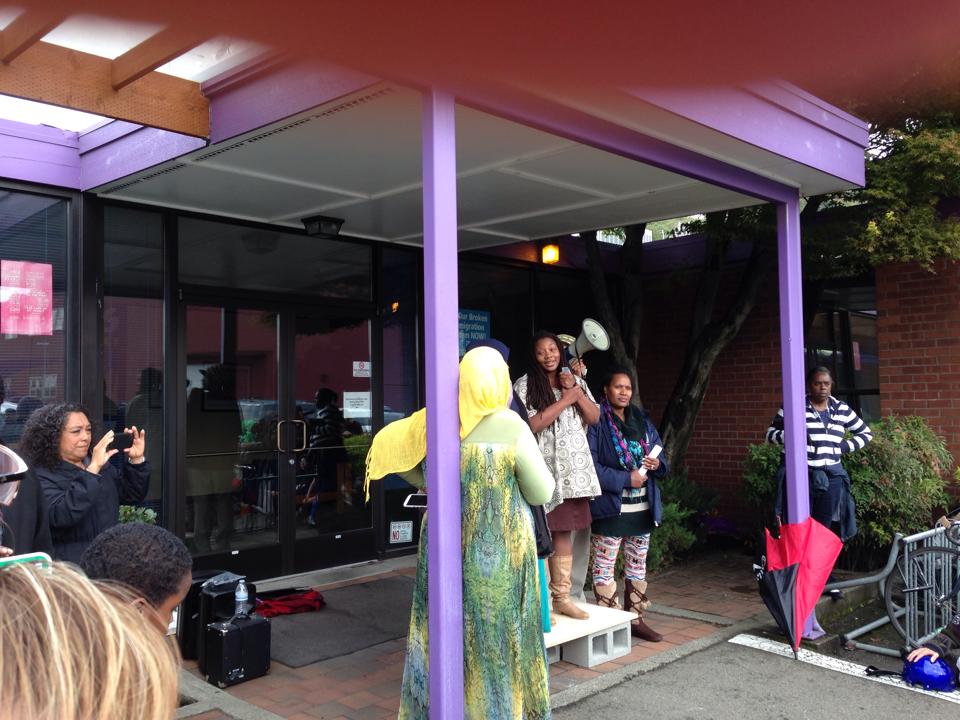 Chants of “Sergio Must Go’ rang like salvos last Saturday morning as over 100 protesters assembled at SEIU Local 6’s South Seattle office along Airport Way S to demand a change in leadership at the venerable union that currently represents more than 4,000 janitors, security officers, barbers and retail workers across King County and Washington State.

The protest, the second in as many weeks, was ignited by an October,11th executive nomination meeting that saw long simmering tensions between established union leadership and reform minded candidates finally erupt, when Amelia Vassar- who is seeking to replace Sergio Salinas in the position of Local 6 President- was blocked from any attempt to run against the incumbent by a peculiar interpretation of union bylaws.

“I chose to run against Sergio because as a union representative, I have seen personally, how union leadership discourages organizers from advocating for certain members or challenging certain contractors.  I also see that members who have ideas or thoughts that conflict with the view of union leadership are discouraged from participating in their union,” said Vassar who has the distinction of being the first person to challenge Salinas during his 12 year tenure as the union’s head.

“He and the board decided that I was ineligible run against him because I did not work as a janitor or security guard, which is a bad interpretation of the bylaws. These same bylaws were in place when he originally ran for president of Local 6, so he would be in violation of them as well. Sergio knows that he is a very unpopular president and will do anything to avoid a vote.”

While neither Salinas nor any of his supporters attended Saturday’s rally they maintain that there has been no violation of union protocols.

However, his opponents insist that this apparent double standard was the straw on a mountainous stack of many that finally broke the camel’s back. The rally found them united in the opinion that Salinas and the executive board’s current approach to running Local 6 resembles something more tantamount to an authoritarian dictatorship than an organization sympathetic to the concerns of its members.

“This is the first time that Sergio Salinas has had any organized opposition and it really shows, because the internal life of the union has become more and more fearful and more and more repressive,” said Michael Ladd, who in addition to participating in the protest is running as a union reform candidate.

“By in large my fellow rank and file union members are not significantly involved in the decision making process within the organization,” Ladd continued.

“It’s just one big joke. As a shop steward on the job I am expected to be a smart, talented, fierce advocate for both my co-workers and the principles of the labor movement in general. But when you attend a typical membership meeting you quickly find out that the same standard doesn’t apply. Under Salinas, once you walk through the doors of the union hall you’re pretty much expected to shut up, turn your brain off, do as you’re told and never seriously question the leadership’s agenda”

Salinas’ opponents contend that he has been able to concentrate union power for himself and his flatterers on the executive board by installing a fear of retribution in any member who dares oppose him or his policies.

“He terminated me for disloyally once he learned that I was running against him. This is illegal. You can’t terminate me to take me off of the ballot. The members and the international union are going to see through this,” stated Vassar.

“There are countless people who say to me: I’d like to support you but I don’t know if I want to sign your petition Mike because I don’t know if that’s going to get back to Sergio or not, and I don’t want to lose my job,” added Ladd, who has spent the past several months passing out petitions making the case against the union’s current regime.

“We don’t need Edward Snowden to hand us some smoking gun or leaked document to put this all together, these sort of reactions are symptomatic of what many of my coworkers are already thinking. We have a lot of questions as to what the real relationship between the union leadership and the employers is like. And considering everything that has happened we are preparing ourselves for further retaliation from the union officials and the supervisors alike.”

Alongside jitters over reprisal, those at Saturday’s protest are unhappy with what they feel has been a growing coziness between union executives and the employers they are responsible for negotiating with on behalf of union membership. These concerns seem to point to Saturday’s protest being far from the last as long as the current constitution of the executive board remains intact.

“We have no other choice than to change the leadership. We’ve gotten to a crisis point with the issues of extreme workload, employer abuse and meager contracts for workers that are euphemistically labeled  modest contracts. Despite being organized for several years our security guards don’t even have union health care,” stated Ladd.

“It’s obvious to many of us that Salinas and his staff are resorting to outright repression because they have realized that the majority of the Local 6 membership want serious reform. Our message is simple : we want the leadership and the union officials to directly reflect the will of the membership. We want a fighting union that empowers both workers on the job and also the communities that we live in order to organize together for a better life and a better world. We are sick and tired of seeing the union leadership stand by as we work our fingers to the bone while the employers get fat and rich. It’s high time that we take our destiny into our own hands.”