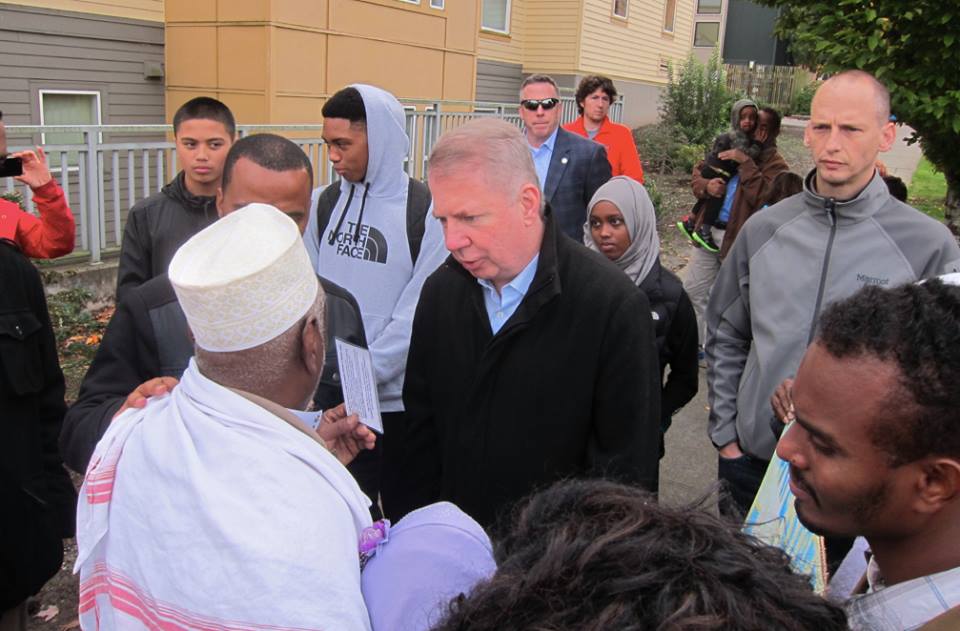 Some expressed outrage at the city for what they view as gross negligence.  Some reserved their indignation for the craven perpetuator of a deplorable crime. And still others probed for concrete solutions to a problem that continues to plague the southend of Seattle with abnormal frequency- yet all gathered together last Saturday at 2:00 pm at the Columbia City Light Rail Station to participate in a “walking vigil” for  the 7 year old victim of a hit and run car collision.

One month prior, Zeytuna Edo- walking a short distance from her home to a tutoring class- was crossing the street along Genesee and Martin Luther King Jr Way S  with her family, when an unidentified car, struck her,  leaving her unconscious, bleeding body in the middle of a busy intersection, furiously speeding away before any witnesses could identify the driver behind the wheel of the vehicle.

Edo-who  is currently hospitalized and only recently emerged from critical condition- sustained multiple injuries, most significantly to her head. The rapid response of paramedics to the scene is credited with saving her life.

The Seattle Police Department continues to search for the person who hit her, and is asking anyone who may have any information on the event to come forward.

“I think it is completely wrong that a kid can get hit in the street and a person can drive off and not care,” said Adam Dodge, a local Columbia City resident who came to the vigil to lend his support to Zeytuna’s family.

While nearly everyone in the crowd of more than 100 people who attended the vigil walk- which commenced at MLK Jr Way S and Alaska ended several yards north on MLK Way and Genessee- shared in Dodge’s disgust at the tragedy, many in attendance saw it as symptomatic of a much broader issues-what they feel is the city’s indifference at calming traffic along busy southend arterials- most notably Martin Luther King Jr Way S and Rainier Avenue South.

With the area experiencing a series of car accidents- most recently a massive wreck involving 15 cars and injuring 10 people that transpired on Rainier Avenue South just a day before the vigil- most southend natives have been left scratching their heads in attempts at pinpointing the root cause of all the vehicular calamity the area has suffered through in recent months.

“I think the issue is road design, traffic planning and education,” said  Barb Norman, a local who had for some time been concerned about the speeds cars were permitted to go as they entered into the densely populated neighborhoods.

“We have a similar issue in the north end. We have very busy streets like MLK Way,” said Selena Carsiotis- who is a safe streets activist and ventured from her Crown Hill neighborhood to be part of the vigil as  well as  to take part in a dialogue centering around what can be done to make all Seattle streets safer for pedestrians and bicyclists.

“I was looking at the wreck that happened on Rainier Avenue South where  10 people were injured. I think its speed and freight that is the main thing causing these accidents. Also, this area is a state freight corridor and I think that might be one of the challenges to the city’s ability to slow speeds. So we might need some collaboration with other jurisdictions to make that happen, but it can happen.”

Both Seattle City Mayor Ed Murray and Seattle Department of Transportation (SDOT) Director Scott Kubly attended the vigil and reiterated their committed to calming traffic in the area. SDOT had previously scheduled two Rainier Avenue Road Safety Meetings- taking  place November 12th and 18th with the intention of relaying the city’s plans for taming traffic along South Seattle arterials to the community and seeking their feedback.

Residents hope that the meetings will provide more action than talk, as several have grown exhausted dealing with an issue they feel the city should have addressed long ago. This was on full display at a “Solutions Meeting,” hosted by Rainier Valley Greenways- the main proponents of
city prioritization of safe southend streets for walkers and bicycle riders – that was held directly after the vigil at the Rainier Vista Boys & Girls Club.

Interactions between the mayor-who spoke at the Boys & Girls Club- and community members often grew testy as many remained unsatisfied with the city’s response to the ongoing rash of accidents.

“I really hope that something actually comes out of these (upcoming) meetings and that  SDOT can put some immediate measures in to slow the traffic. That would improve what’s been happening in the area immediately,” iterated Norman.

With the cacophony of opinion surrounding what, if anything, the city can  actually do to ensure safe, walkable southend streets, it seemed almost inevitable that the original impetus of the vigil would be drowned out, however, the thought of the 7 year old girl who was transferred to Children’s Hospital early last week after being at Harborview Medical Center since the incident, was never far from anyone’s mind.

“Our first goal today is to make sure that Zeytuna- her family, her friends, her relatives- know that we are here to support her as a community,” shared Phyllis Porter, who assisted Edo’s family in organizing the vigil.

“Zeytuna and her family is in our hearts. We will hold the idea that our community can be a safe  and healthy place for everyone and the streets we walk on  can be a good place for us to live”, continued Porter.