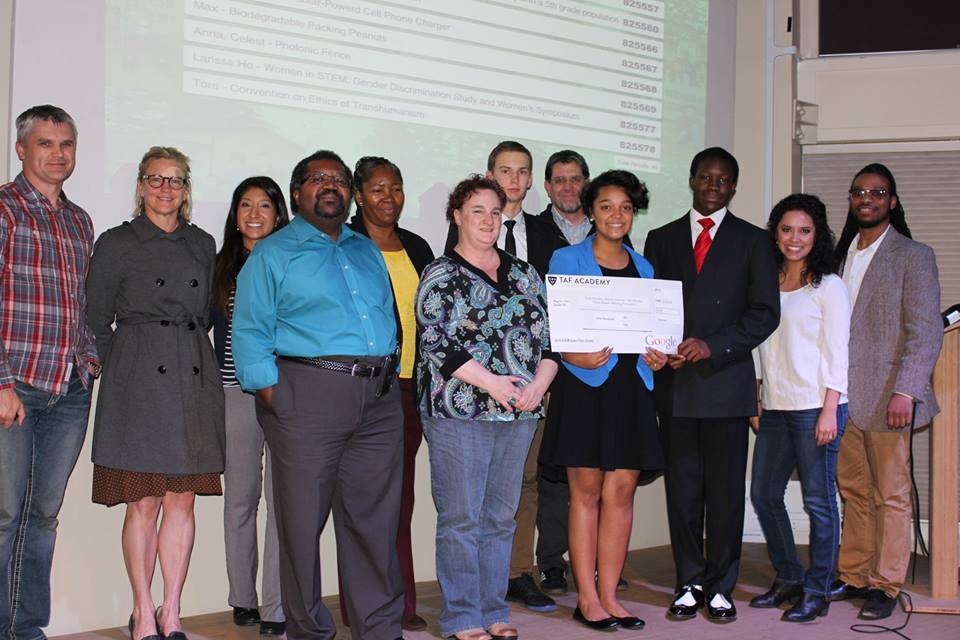 TAF Academy’s STEM Expo Pitch Event on November 13, 2014 ended with a pitch from a tenth grade student of color. She proposed a convention bringing together tech companies, gamers, bioengineers, and anyone else who might be interested to lay foundations for the ethics of transhumanism. Huh? What? What did she just say? What is transhumanism? And how is it a tenth grader knows and I don’t?

Transhumanism, it turns out, is the technological enhancement of human beings: a pacemaker, an artificial limb, brain stimulating implants, etc. As I listened to this young woman describe her interest and concern about the unrealistic depictions of enhanced humans in film and gaming, I had the strangest flashback.

Eleven years ago. I sat in a crowded conference room watching an African-American five-year-old girl give a PowerPoint presentation on her favorite animals. That, in itself, is a huge statement. Five-year-old. PowerPoint. Presentation. Midway through the slide show, the adult running the computer made a mistake and couldn’t figure out how to get the PowerPoint back on track. The five year old stopped speaking, walked over to the computer, gently pushed the adult aside, reset the slide deck to the correct place, walked back to the center of the room and continued her presentation. This was my introduction to Technology Access Foundation (TAF).

Within a few months I was a classroom volunteer, working alongside teacher Zithri Ahmed Saleem with fourth- and fifth-graders in TAF’s Rainier Valley after-school program, TechStart. Unlike other after-school programs, TAF didn’t cull applicants to ensure only the most motivated and experienced got in, thereby ensuring high success rate. No, TAF accepted any student in the community, and most were low-income. While the majority of students were African American, the program included many immigrant or first-generation Asian, Latino, Pacific Islander, and Native American children as well.

Co-founder Trish Dziko knew first hand what it was to be counted out. With a B.S. in Computer Science, she spent over 15 years in the technology sector where her colleagues were few women and fewer people of color. Understanding the obstacles she had faced, she and her co-founder/spouse, Jill Dziko, set out to make it easier for the coming generations of African Americans to build careers in technology. Their research led them to start a new kind of program that became TAF. Believing that every child can succeed given an atmosphere of high expectations, committed and knowledgeable adults, and high quality resources, they researched and employed methods that proved successful by incorporating a project-based, challenging, STEM curriculum and demanding that “students first” be the motto of all adults working in or with the program. A techno-geek myself, their approach and focus spoke loudly to my own objectives.

In the classroom, I watched ten-, eleven- and twelve-year-olds learn how to use geometry, algebra and physics. Without telling them about the level of complexity, Zithri Saleem had them solving college-level math problems. They did time and motion studies, created websites, wrote complex formulas in Excel spreadsheets, produced PowerPoint presentations, and grew more confident not only in the information they were learning, but, more importantly, in their ability to learn. A shy, mousy, young girl learned how to speak up in a crowd of loud and bossy boys. A loud, bossy boy learned to work collaboratively with others. Students became one another’s supporters. They saw the teacher as their resource for learning, rather than as an authority to conquer. In the three years I supported Zithri Saleem’s work, I watched the students grow in confidence and in hope. More importantly, over the following decade those same students graduated from high school and college and most are now in STEM professions. TAF has a 90%+ college graduation rate.

I joined TAF’s Board of Directors and had the privilege of participating in TAF’s transition from a small after-school program to what it has become today: a partner with public schools in their transformation to a 21st Century model of education.

Divergent feelings welled up as I sat watching these presentations during the STEM Expo Pitch Event.

Almost all of the presenters were students of color, about half were female.

This event made me so happy. And yet. And yet it broke my heart, because it also brought back the memory of a community meeting seven years ago where students and parents from Rainier Beach High School, deceived and misinformed by teachers and administrators, turned TAF away from opening the first TAF Academy in Rainier Beach. The result has been unparalleled success for TAF Academy in Federal Way, with program partnerships expanded into other districts, while nearly a decade’s worth of children continued to be fed through a failing system in south Seattle. I watch in dismay and disbelief as one group after another of community members and self-titled activists start from scratch year after year with calls for new programs to close the achievement gap, while a proven, successful program is ignored. If only it was just about the children. If only.

For more information about TAF and its programs: http://www.techaccess.org/