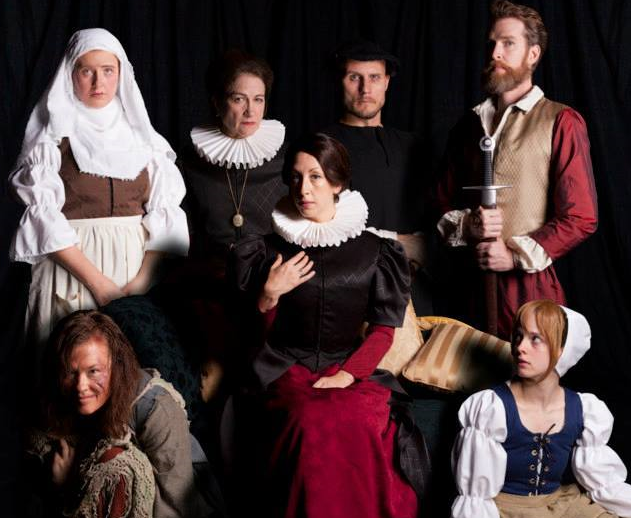 Elizabeth Bathory: noblewoman, beauty, and one of the most prolific serial killers in history. Known as a vampire, she earned the nickname “Blood Countess” by murdering between 100 and 650 young girls (accounts give varying figures) and bathing in their blood. Female serial killers are rare, let alone medieval noble serial killers who also employ a bit of blood play in the mix. It is perhaps of no surprise, then, that Bathory has become the source of many a legend.

Annex offers its own take on this tale in Blood Countess, by Kelleen Conway Blanchard. Blanchard has written for Annex multiple other times, and is prized for her trademark grotesquery and strange syntax that is at once clever, creepy, and downright weird. However, her words this time around seem a bit out of place. Maybe it was the subject material, maybe the time period – regardless, Conway’s monologues about strange foods and sex, while certainly ear-catching, don’t quite land. Though the individual phrases hold true to Conway’s poetic weirdness, the construction of the story falls flat.

The mixed acting in the ensemble contributes to moments that barely fail to land. Though Terri Weagant delivers a compelling, multi-faceted performance as an abused woman driven by her circumstances to murder, the bulk of the company features broad strokes of overacting and falls short on the subtlety that could have sold the piece. Mary Murfin Bayley, playing the Countess’s mother, does reasonably well as an overbearing, manipulative mother who drives the young Countess into fits – in particular, her obsession with clean and dirty, sex and purity, is compelling. But the company generally favors portraying Blanchard’s characters as caricatures rather than people.

Elements of mysticism thrown into the Countess’s descent into madness only increase the erratic nature of the piece. They seem distractingly random and unnecessary. Instead of seeing how a murderous husband, controlling mother, and lecherous priest contribute to a woman’s descent into murder, Blanchard blames it on the devil and calls it good enough. The execution of this figure was relatively poor as well – simple melodies sung by multiple non-singers served as character lines, while the being itself featured a simple horned mask and dead servants with fake intestines. All in all, I felt that the creation of an otherworldly being could have been done with a little more, well, otherworldliness.

The staging of the piece has some clever moments – notably, the reveal of a bathtub behind the back wall and the creation of a priest’s confession booth with just a screened window. However, strange set design choices like three poles splitting the space in half do more harm than good. The sound design attempts to force a dark mood on many scenes that could have stood with much less – or quieter – ominous music, which coupled with the lighting creates a campy atmosphere for many of the scenes.

The show does succeed in painting a compelling portrayal of a noblewoman in this time period. The sexual and political struggle between the Countess and the men that surround her raises the question: How can a smart, educated woman possibly achieve power in this time period? The piece’s underlying themes of sexual violence and the perceived problem of an educated woman are additionally effective. The Countess’s lust for learning and frustration with women’s ignorance made her character a sympathetic one, and Blanchard worked hard to portray both her darkness and her light. However, ultimately the piece feels like a second place runner: though it does the job, it ultimately falls flat at the finish line.

The Bottom Line: Blanchard’s darkly comedic writing style doesn’t quite carry the story of a legendary serial killer through in Annex’s Blood Countess. Mixed acting and design elements only further the piece’s inability to land, and though the take on an old tale is compelling, the execution ultimately falls flat. If you’re looking for an innovative portrayal of Elizabeth Bathory, see the show, but if you want a brilliant play, sit this one out.