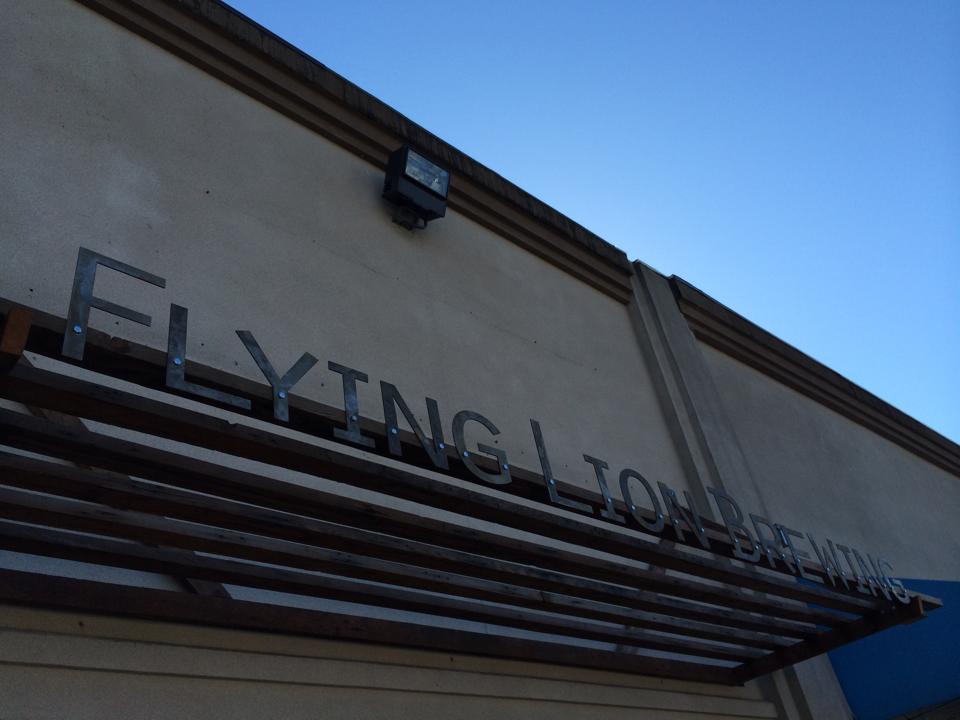 To hear Flying Lion Brewing owner Griffin Williams distill his extensive knowledge on the craft of beer making is to occupy the shoes of the obnoxious Harvard dunce in the famous bar scene from Good Will Hunting as Matt Damon’s savant character untaps a torrent of esoteric information leaving the poor sap’s cerebrum overwhelmed.

The 24-year-old self-taught brewer’s love for the world’s second most consumed beverage is palpable as he barely takes a breath while describing the minutia associated with its fermentation process. As he discusses the distinct way to join hops, filter cartridges and yeast in holy union to produce savory ale he sounds like a classically trained thespian anxious to finally recite Shakespearean verse to an appreciative audience.

Visiting Williams’ two-month-old brewery in Columbia City, you quickly find his claim of the Flying Lion being all about the beer to ring true.

First timers to South Seattle’s newest brewery aren’t bound to find much else from the menu, which is purposeful and shouldn’t be taken as a criticism of the place as its specialization is what has endeared it to the local community.

The fledgling business, which features a small bar and lounging area for patrons along with bunker sized fermenters that take up the majority of space in the storeroom, has been booming since opening its doors in October.

Its early success is attributed as much to the foot traffic it gets as a result of being located along Rainier Avenue in South Seattle’s “hippest” neighborhood, as it is to its young owner’s experimental artisan approach to brewing. Treating the brewing process much like Van Gogh did a canvas.

“I love experimenting with beers and trying to develop brews from things that people wouldn’t normally think went well with beer. I kind of have that mad scientist streak in me,” chuckles Williams as he pours a glass of Porter made from a family recipe.

Though young by professional brewer standards, experimenting with ingredients for great tasting beer was something imparted to him at a very young age by his father who “home brewed” for as long as Williams can remember – passing the passion for creating unique tasting beer derived from his own original recipes to Williams and his two other sons Evan and Tyler (Williams, of course, never drank the beverage until he was of legal age).

This love was further developed throughout the years in a competitive annual Christmas Stout making contest for family brewmaster supremacy. “I won every year,” Williams announces with a hint of pride in his voice at showing up his two older siblings.

This penchant for experimentation is reflected in Flying Lion’s ever rotating menu, which is the adult beverage equivalent to a box of Fran’s chocolates. Though it’s replete with Flying Lion Brewings’ version of traditional ales it also contains unique concoctions alongside them that you’d be hard pressed to find anywhere else, such as a Porter made with Sweet Potatoes that tapped out soon after Williams introduced it.

It’s not abnormal for Williams – who has used everything from pecans, to birchwood and  spruce tips to molasses in attempting to find a combination of ingredients that will enliven beerophiles’ tastebuds – to spend an inordinate amount of time in the “laboratory” of Flying Lion. He recently finished brewing a new creation he says will taste unbelievable and that you could never guess the ingredients to.

Unconventionality is fast becoming a trademark of the young South Seattle brewery, as unlike most places it specializes in crafting darker ales. It’s a family preference, according to Williams.

Operating Flying Lion has been a dream come true for Williams as he says his brothers would frequently joke with him about one day opening up their own brewery – an idea he initially took with a grain of salt until his older brother Tyler called him and asked if he’d be willing to manage a family brewery.

After being convinced that it wasn’t a joke, Williams leapt at the chance to jettison his unfulfilling office job for a life of brewing as a business.

Williams shares that (as with any startup) location was extremely crucial to him. That played a large role in his decision to settle on a South Seattle location. The young entrepreneur, who is from the Midwest, says he visited every neighborhood in the area – often planting himself at coffee shops and other hubs to get a feel for the area and fell in love with its diversity and spirit – in route to selecting Columbia City.

“I really just wanted to be a part of something special, and this area is extremely special. I didn’t want to be looked at as “gentrifying” the area, only adding to it. The people here are incredible,” he exclaims.

It appears that Williams’ choice of South Seattle has paid off, as the reception he’s received from local area businesses and patrons has been remarkable for a business still in its infancy. Williams shares that he received a large bouquet of flowers from local eatery Geraldine’s Counter as well as request from a litany of local bars and restaurants including Tutta Bella, Rookies, Union Bar, Lottie’s Lounge, La Medusa, Big Chickie and The Hummingbird Saloon to carry Flying Lion’s beer within the first few weeks of operation.

Though Williams is grateful for all the attention the brewery is receiving, he acknowledges that the rigors of its day-to-day operations doesn’t leave him much time for a life. He currently works 7 days a week with the typical brewing day lasting from 7 to 9 hours (down from 14 hours when he was just getting started), in addition to serving as erudite bartender during its open hours.

Williams says his age allows him to not worry so much about the sun up to sun down schedule he currently maintains. He reveals that it’s actually what allowed Flying Lion Brewing to become a reality as his two older brothers Evan and Tyler both have families that precluded them from taking on much more responsibility.

In terms of the future, he sees Flying Lion – along with Hillman City’s Spinnaker Bay Brewing – carving out an identity in Seattle’s brewing world for Rainier Valley. One unique from Georgetown or Fremont.

He also envisions Flying Lion expanding as the place is rapidly becoming a destination spot for those with an appreciation for the intellectual side of beermaking and aren’t simply content with chugging down their recommended daily value of “Vitamin R”.

“We really want to be a place that when people come here, they know that the bartenders are just as knowledgeable as the brewers and can go into detail about how the beer was made, why it tastes the way it does and the differences between each of our offerings that goes beyond ‘one is lighter than the other.’ A lot of our customers are curious about the beer. They want to know the ingredients that went into it, what temperature it was fermented at, etcetra.” he says.

While Williams submits that the brewery has already outgrown the current storefront space it resides in just a few doors down from The Hummingbird Saloon, he pledges that whenever Flying Lion finds it necessary to move it will maintain a South Seattle address. “This area is really booming so while I’d love to stay in Columbia City, there’s always potentially Rainier Beach, Skyway or Othello area to relocate. I just want to make sure that we become a fixture of South Seattle.”

He also adds that as Flying Lion grows he hopes it always maintains the “family business” feel it’s cultivated – never wanting it to come across as an impersonal “chain” brewery whose beers are hard to distinguish.

This scenario seems highly unlikely as long as Williams keeps up his “mad scientist” ways. To quote a patron overheard praising one of Williams’ latest creations before leaving the south end brewery: “I don’t know what’s in here but it’s damn good.”