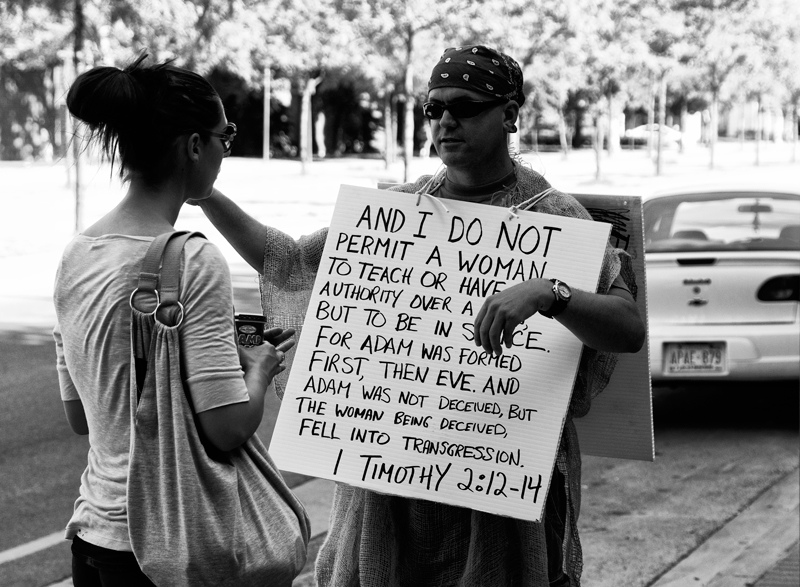 Yup. Now’s a good time to reframe your identity: ALUMNI. No doubt Rick Warren gave you lots of good ideas on how to get past this transition in your lives, but I thought you might want to hear from someone who’s actually gone through something similar: a spiritual divorce, if you will. After all, you’re about to become members of a not-so-elite group: survivors of religious deceit.

Were you part of a cult? No one will ever be able to answer that question for you so don’t even bother to enter into the debate. There are more important questions for you to explore. Questions that will haunt you until you’ve worked your way through them:

Before we dive into those questions, let me give you my qualifications for this open letter.

At age 21 (yes, long before many of you were born) I joined a Christian religious community. The pastor of this community was my best friend’s charismatic father. He spoke of love, and forgiveness, and renewal, and cleansing. He showed me a pathway that steered my life in a new direction. All I had to do was trust him and his vision, trust that his connection with God was strong enough to guide me. For the first two or three years, my devotion to this new life was absolute and passionate. When I learned that the pastor wasn’t actually married to the woman he cohabitated with, I believed his explanation that they were married “in God’s eyes and didn’t need the stamp of man’s laws.” When I grew uncomfortable with his cruelty toward emotionally vulnerable people, he simply said that God’s prophets were often obliged to be strong in the face of sin.

My life was good, though. I worked hard on behalf of the community. Because it was a new, small community at first, I had the opportunity to do things that fully used my skills and talents. I operated an ancient printing press and learned how printing worked. I created curricula and taught classes. I gave speeches. I wrote articles for the newsletter. For the first time in my life, people wanted me to use every part of me.

Well, not exactly. They were fine with any work I did, just as long as I gave them the economic, social, and spiritual benefits and credit for it. They reminded me regularly that my gender excluded me from decision-making or authority. Once I actually finished reading the entire Bible, the questions I asked about interpretation, translation errors, and inconsistencies were seen as threats. I was labeled an insubordinate, unsubmissive woman. This allowed all of the men AND boys, regardless of age, and any of the women who wanted, to treat me as flawed and broken. Some did. Still, I stayed. Why? Because I still believed this community had a special message and calling, and that leaving it would destroy my relationship with God. I believed the leader had a special connection with God and that leaving would sever my connection. After all, he was successful and sure of his direction.

Eventually I, and the man I married (who was also a part of the community), had a deep and honest conversation about the hypocrisy we saw around us. We saw how people who joined the community with more financial resources were treated very differently from those who had little. We observed life decisions like marital partnerships and family ties being forced on community members. We saw how children were being judged brutally and punished cruelly and unevenly. Seven years after I joined, my husband I left. It was one of the hardest things I’ve ever done. We walked away from a sure and secure path into the unknown. We left with just our clothes. I have never regretted that choice.

The first year after leaving was confusing and lonely. Our marriage had been forged within the community. Once outside it, we realized that we were great friends, wonderful lovers, but neither of us was ready for the commitment of marriage. We had internal paths to explore that went in very different directions. We divorced amicably and stayed friends for a long time afterward.

Once away from the community I saw how deep the hypocrisy ran. And I couldn’t believe I went along with it for as long as I did. Eventually, I had to face the question: why did I stay, really? What was it that drew me in the first place? What was so hard to let go?

It took me a couple of years to get the answers. My father had died three years before I joined the community. My mother was a very dependent woman without skills for self-sufficiency. The burden of family decisions had fallen on me. I had neither the skills nor the maturity to make those decisions. I started college, but in the chaos that had become my life couldn’t sustain it so I dropped out. I won’t bother you with the litany of escapist choices that followed, just think really bad made-for-TV movie.

I met the pastor’s daughter in the midst of this swirling chaos. She was estranged from her father at the time. She and I drank and partied together. We were both secret intellectuals. Aquarians. We spent hours in bars and coffee houses discussing politics, religion, war, sex, philosophy, music, psychology and anything else that floated our way. We bonded in our pain and dysfunction.

Then, one Christmas, she visited her father and his non-wife. She never came back. Instead, she invited me to visit them for my January birthday. I spent a week with them, and attended their hours-long nightly rituals of prayer and singing. They used the daughter’s knowledge of my fears and guilt over the very difficult choices I had made to offer me a new start… a chance to erase everything that had happened before. Forgiveness. Redemption. All I had to do was walk away from my life as it was and join their community. They would love me forever and my past would be wiped away.

Who wouldn’t want a chance to start over, a chance to be loved without condition? That was the idea anyway. Except there were conditions: some implicit, some explicit. The implicit included believing and doing everything I was told. The explicit included leaving everything I owned behind and committing every material possession to the furtherance of the community. This was, after all, God’s work.

My feelings of loneliness, guilt, and inadequacy were the opening that allowed me to be seduced into joining this community. Rather than accept those feelings and explore the veracity of their source, I looked for the easy out of absolution.

After I left, I realized there had been hints of corruption all along the way. The first was the inequitable distribution of resources. Every penny I earned went to the community, but I had to ask for money for clothes and other basic needs. While this community model was extreme, I’ve seen this pattern in every corrupt system. When resources become available, they go to serve the leader(s) and not the community. A true community leader asks what furthers the community goals and vision. A corrupt leader will use the resources for themselves. Oh, they’ll couch it in language that appears to serve community (e.g. “I need to drive a car that brings honor to the community,” or “God wants the world to know that His people are successful”), but ultimately the resources will be used to accentuate their status and further their personal aims.

Another hint was the pastor’s need to be perceived as infallible, highlighted by scapegoating of anyone who raised doubts or questioned his authority. No one is infallible. The whole purpose of community is the strength that comes from multiple perspectives. A true leader finds ways to strengthen the most vulnerable members of the community. They will accentuate the assets of those who have little, and ensure that anyone who has much is equally recognized. They will spend as much time with those who have less materially as they do with major donors. They will not allow those who have resources or assets to disrespect those who do not.

Was any of my experience worthwhile? Oh, yes. I learned so much about the type of person I am. I recognize a fraudulent leader in moments. I have no patience for abuse of power and no tolerance for bullies. My love for and understanding of mechanics and, eventually, technology was bolstered there. The belief I could accomplish almost anything I determined was born there.

Was there residual damage? Yup. I have trust issues. I still believe most people want to do the right thing and want to be in honest relationship, but I enter all relationships much more cautiously. The more charismatic someone is, the more likely I am to go on high alert around them. Four people have negatively breached that line of trust in nearly 35 years. Each came along to fill a particular void I was experiencing. The lesson: that void is a precious and permanent part of life and not meant to be filled. It is the mystery of individual existence. Feeling it is verification that I’m still alive and conscious. Anything and anyone who offers to fill it is a liar. Religion, lover, political party, philosophy, adventure, parent, child, teacher… who- or whatever claims to fill that mystery is lying to you. They can offer you strategies for coping, but never for eliminating it. It will always be there, and it is there for everyone. The sooner you make friends with it, the better. Just sit back and acknowledge it. Give it a good “howdy” and recognize its presence.

So, welcome to the club, folks. There are more of us than you know. Put aside your fears and guilt. You are not alone. Someday you, too, will have the opportunity to write a letter like this to someone or another group of people recovering from a trip behind the pied piper. You’ll be okay. In fact, better than okay if you learn about yourself and community from the experience. And even more wonderful, you have just become an addition to the anti-corruption meter our region so desperately needs. Feel free to share your stories.

Wishing you the very best,