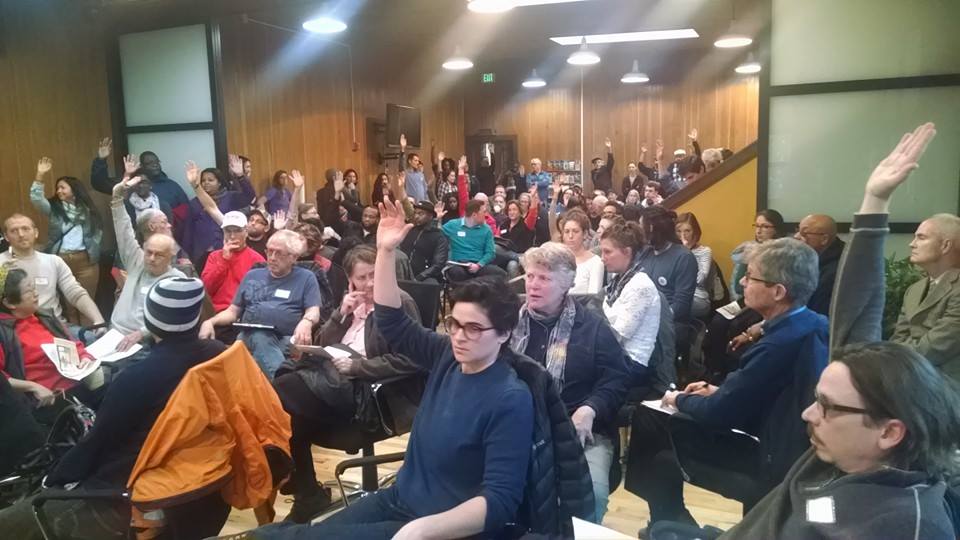 Their roar against racism was deafening. They railed against the condemning of black lives to draconian prison system. They denounced gentrification as infrastructural warfare waged against those of color. Their analysis of race relations in “America’s most progressive city” was as sobering as it was unsettling to their audience – They were a collection of all white people.

Mid-morning of last Saturday saw members belonging to the Seattle branch of the all-white, anti-racist group European Dissent venture to the Squire Park Community Council meeting held in the Centerstone building along 18th Avenue in the Central District.

Their gospel: The imperative role white people must play in eradicating racism in all its forms.

Their target: King County’s proposed Children and Family Justice Center, or, as they pejoratively refer to it: “the County’s new youth jail.”

Their opponent on that day: An outmoded institution of systemic racism they say the Center epitomizes.

The odds were more favorable than first blush might indicate.

European Dissent came at the behest of Ending the Prison Industrial Complex (EPIC) – the group that has been organizing against the Center nearly since the day King County voters passed a levy in August of 2012 approving it’s construction. EPIC had implored Seattle’s 3-year-old chapter of the National anti-racist organization to educate other whites on the racial implications of the detention center.

Typically, Squire Park Council meetings draw in the range of 20 to 30 people from around Capitol Hill and the C.D. – the small neighborhood is sandwiched between the two areas.

As a Squire Park resident who attended the meeting told me, “You can usually hear ants playing patty cake in here.” With over 200 people crammed into a meeting space barely larger than a typical kindergarten classroom on Saturday, you could barely hear yourself without your voice box registering octaves usually reserved for a Sunday at CenturyLink Field.

The mass turnout was attributed to Dissent members canvassing door to door in the Squire Park area the past two weekends to build awareness amongst locals about the County’s plans to replace the current juvenile detention facility located within the neighborhood on 12th and Alder with a sparkling new $210 million “multi-use” building with amenities including spacious courtrooms, “modern” condos, and retail for local commerce – oh, and 160 cells to house juvenile offenders.

What had been scheduled to be a 45 minute discussion around the proposed Center amongst representatives from European Dissent and Claudia Balducci, who represented the county’s interest and has served as “press liaison” for the project for over a year, turned into a full blown Point/Counterpoint faceoff between the two factions.

Ever since the Squire Park Council drafted a letter encouraging the City of Seattle to grant King County a necessary land use permit required for the detention center’s construction, European Dissent has sought out support from the Squire Park neighborhood and the surrounding Central District area against what they view as not just a building with dire repercussions for black and brown youth belonging to the CD and South End, but as a monument to racial injustice in Seattle, belying the city’s claim as one of the most progressive in the nation.

“I think the progressive ideas we have about this city blind us to the racism that exists. I think we as white people can use it as a kind of crutch to say that we’re doing the right things. But if you look at statistics and the facts they speak to that not being the case. You can look at the neighborhoods around Seattle and the way they’re changing from gentrification. This is a very real issue that’s impacting the decisions being made within our neighborhood and city,” insisted Jamie Epting, a European Dissent member who attended Saturday’s meeting.

Epting who has been organizing with the group since it was founded in the Seattle area, offered up several facts to support her stance, including the ongoing investigation of the Seattle Police Department and Seattle Public Schools by Federal Departments for racism, and the staggering and persistent gaps in unemployment and median income between the city’s black residents and their white counterparts (the unemployment rate for black residents is currently three times that of whites, and their median income is nearly half).

Added Rose Ernst, another member of the group who handed out “No Youth Jail” buttons at the meeting: “Racism comes in so many different forms as we’re all aware and Seattle has a form of it that may look a little different but is just as vicious as any other. The CD historically, the black Central District has been a very long and painful process for the last 30 to 40 years.

It’s a process where people are essentially forcefully removed from their communities in a way that you could consider as structural violence, because they can’t afford to live there anymore, so communities they grew up in that they have important family ties to are being dismantled and destroyed and it’s not by accident either. You are seeing this in South Seattle as well. It’s part of city planning and policy as well as the corporate free market working together.”

Dissent members saw the debate that took place around the jail between a trio of them – made up of Jenn Hagedorn, Martin Friedman and Celia Berk – and Balducci, in this light. From their vantage, Seattle’s progressive face was on trial in a oftentimes snarky, but mostly civil exchange that placed the County’s representative squarely on the defensive.

The impassioned triumvirate initially presented the fact that local black and brown youth of color were four times as likely to be incarcerated than whites and rebuked the County for “sitting on its hands” for decades in not addressing the issue even as they allocated funds for a new detention center that would perpetuate the problem.

Balducci somberly responded that the County was “aware” of the issue and had commissioned a “racial impact assessment” around the Center that would determine if it enhanced that disproportionality (Dissent members noted that the County only initiated the assessment after sustained agitation from local groups including EPIC and Youth Undoing Institutionalized Racism).

The Dissenters then brought up the County’s usage of “euphemistic” language around the detention center from the time it had first been put forward to King County voters – with one Squire Park resident taking offense to the County consistently referring to the cells the adolescents would be imprisoned in as dorms – “Making it sound more like a stay at Penn State than the State Penn.”

What was then placed on the table was the economic soundness of spending $210 million dollars on a facility whose remodel the county itself estimated at $40 to $70 million dollars. This in a pervasive climate of austerity where savings from the renovation option could be prioritized to fill the gaps in the municipality’s public health fund and unincorporated area budgets, amongst other pressing needs of the King County constituency.

“We’re carrying through the will of voters…” came the response.

The final shot across the bow from the Dissenters was their claim that the county’s “outreach” to members of the community had been primarily focused on gentrified areas and communities such as the one being spoken to on that day. All while ignoring those from the South End and CD who stood be impacted the most – noting that the renters of the facility’s condos would more than likely aid to the black displacement already underway in the area.

The embers of a denial that sparked with, “That’s not the case….” were swiftly snuffed out by an interruption from one of the few blacks an attendance, an activist who went by the name By-Polar, calling the County “liars and racists” in tirade inspired by the “rage of someone whose opinions have consorted with deafness for for too long,” he would tell me.

By that point, had anyone been tallying the score, it would have been more lopsided than last year’s Super Bowl. The room, which initially (European Dissent members aside) had been filled with residents from around the area who had earnestly come to hear judicious takes on what until a about a half hour ago had been a controversial issue for many of them, had no doubt left as to where their sentiments laid.

Balducci departed from the meeting early – those in the audience seemed to sense she was making an early getaway.

Only a few moments after she hit door, a Council member moved for the Squire Park Council to draft another letter to members of Seattle’s City Council. However, the letter presented this time would state that, “No new youth jail be built whatsoever,” and instead the money would be used for preventative programs. In addition, it would ask that a racial assessment around the center be conducted that authentically engaged the communities that stood to be most impacted by its completion.

The motion carried and was passed unanimously by all members in attendance.

It was a victory, albeit a relatively small one on the surface as the Squire Park Council has no official jurisdiction to halt the building of the facility. But members of European Dissent took it as shining testimony to the power of organizing and a moment of civic engagement that is just as often talked about as it is dismissed.

“This was a demonstration in how surface level support for immoral and incompetent public policy can be eroded when confronted by the truth. The county did a half-assed job at (garnering support for the detention center) and it came back to bite them in the ass,” said a European Dissent member after the meeting concluded.

“Today was great obviously, and more, the result was better than I could have imagined, but there still remains a lot of work to do,” a proud Epting shared after the meeting.

Epting and other members know that their ultimate goal still remains daunting, even as their numbers swell to over 200 members they realize how much of a drop in the bucket that is to a city that currently houses over 420,000 white people.

Offers Ernst, “It continues to be a challenge to get that white person who lives in Columbia City, voted for Obama, and says ‘I’m not racist’ to care about eradicating racism. I think it becomes a matter of presenting the truth to them, and once that happens there can be no more denial.”

Ernst also notes that it is important that those white people who accept their role in undoing racism not take the helm of any anti-racist movement. “It’s important in movements in general to always center them around people who are most impacted, they’re the ones who should be making the decisions, because they’re the ones who have the most experiences and direct connection in terms of stake of what happens, that’s absolutely central to any organization, be it around racial, gender, or class justice.”

While the path remains long for the group, everyone who was associated brimmed with confidence on Saturday at what the future might hold – encapsulated in the Facebook post of member Ben Wiselogle.

“Real change is possible. I saw it happen this morning in one gentrified neighborhood in Seattle. I saw a group of organizers develop a plan, go door to door, bring those community members to the table, and then have an honest conversation about one of the most difficult things to really discuss – racism in our potentially great nation, and in our own neighborhoods. I saw the community council listen, vote, and I saw them say unanimously that they want to be on the right side of history.”