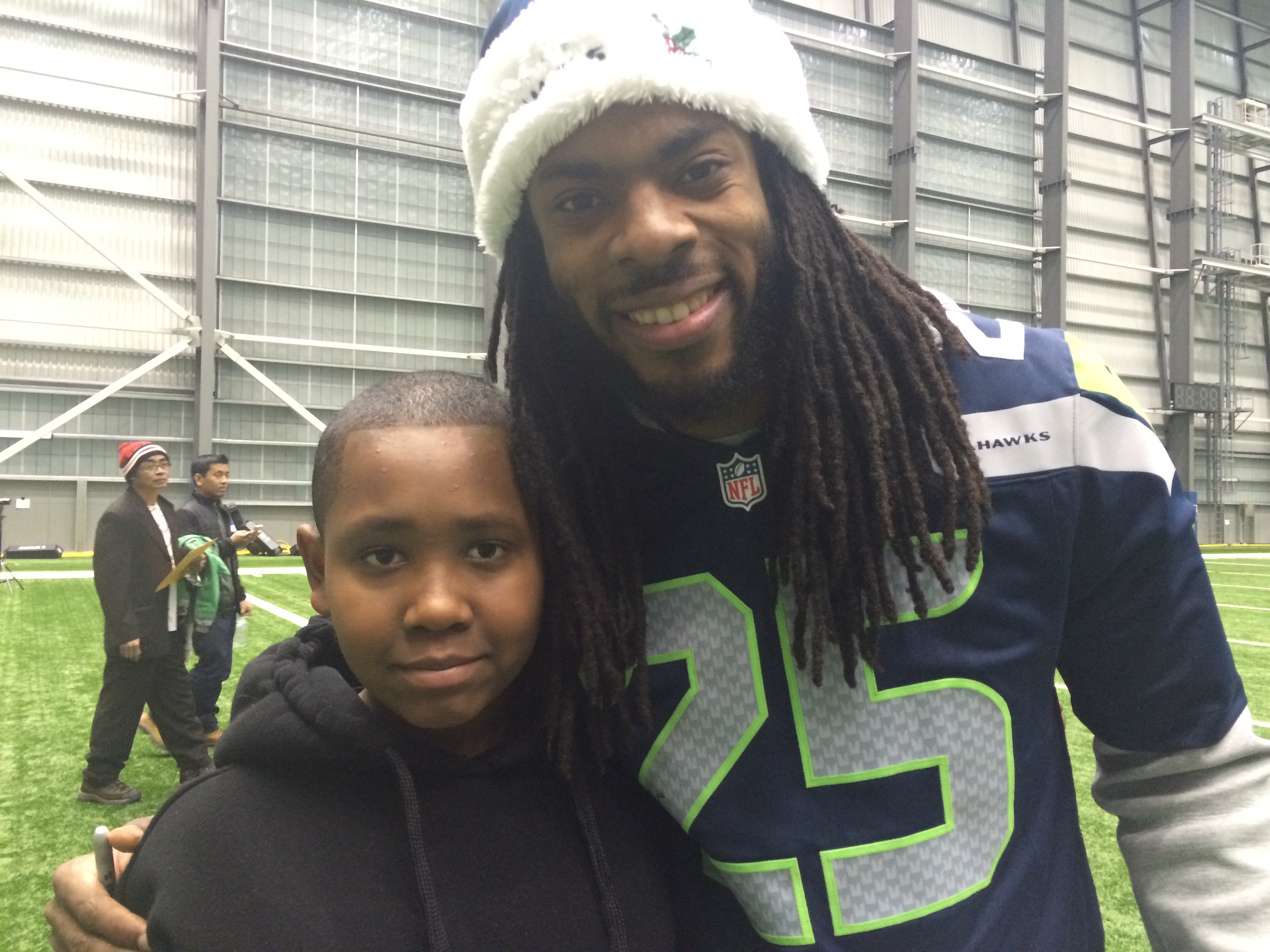 Unless you’ve been holed up in a concrete basement awaiting the apocalypse, you’ve almost certainly heard of Richard Sherman, the star cornerback for our beloved Seattle Seahawks. So you can imagine our self-doubt when his partner Ashley asked us to keep his identity a secret from the RAYS  families he wanted to support for the holidays. How can we keep Richard Sherman a secret? His foundation, Blanket Coverage, lived up to its name by keeping the details of the operation under wraps. While most families guessed that the “special community member” inviting them to the Seahawk’s training facility to shower them with gifts might just be an NFL player, his name did indeed remain a mystery.

The night of the event began with a surprise when two flashy buses complete with LED screens, state-of-the-art sound systems, and electric blue light fixtures came to The Cynthia Green Family Center  in Skyway to pick up the first round of our families going to the Virginia Mason Athletic Center. I raised my eyebrows in slight disbelief and chuckled: this was certainly a first. I’d seen school buses and Astro vans grace our parking lot for field trips, but never party buses that reminded me of MTV’s Real-World. Two drivers donning Seahawks jerseys cheerfully invited our diverse bunch – four families, two staff, and a Burmese interpreter – aboard the sleek black buses. Within moments of taking our seats, 12-year-old Chit Laing asked me to connect his phone to the speaker system; he wasn’t about to waste a second of our posh transportation experience. So I glanced at the driver who gave a casual nod of consent, then cranked up the Burmese hip-hop.

As we neared our destination, the kids pressed their cold little faces against the windows, gawking at the enormous waterfront facility. None of us knew exactly what to do once we got there – the buses had already left to pick up six more families from RAYS – so I was relieved when someone from the foundation came to usher us inside. We wandered onto the practice field and my eyes were immediately drawn to a massive blue banner hanging from the lofted ceiling: Super Bowl XLVIII Champions. I then absorbed the broader scene. At least 30 kids were already darting across the football field while their parents shuffled around in awe. Neat rows of gifts wrapped in bright paper waited along the field’s periphery. Directly in front of us, a girl in her mid-twenties was standing at a table, warmly greeting families and encouraging them to stand in line for pictures. “Richard will be here soon,” she assured us, at which point the excitement amongst our families reached palpable heights. We’re gonna meet Richard Sherman! I’m gonna ask him to sign my hat! I’m gonna ask him to sign my shoes! My friends aren’t gonna believe this!

We waited for a few minutes in front of an elaborate photo backdrop with Christmas trees, wooden wagons, and poinsettias all forming a semi-circle around a plush leather chair. And then Richard Sherman arrived. He entered through a door on the opposite side of the facility, so his impressive size couldn’t distinguish him at that distance, but I recognized from afar his characteristic dreadlocks beneath a blue Santa hat. He strolled up to our line, saying hello to families as he passed and asking if they wouldn’t mind taking pictures with him. Naturally, there was zero hesitation. I waited with Luis, a 7th grader at McKnight Middle School, who confessed that he was “totally freaking out on the bus” because he couldn’t believe he was going to meet a Seahawks player. “I was expecting to watch a practice, but this is actually much better,” he said, laughing. I stepped away from the line, watching family after family approach the Christmas scene where Richard greeted, hugged, or shook hands with every person before huddling them together for a group photo.

I was so engrossed in the picture procession that I didn’t notice additional attendees subtly joining the festivities. But when I again scanned the field behind the photo shoot, there were no longer just children running around gleefully. Dispersed amongst the many little people were some not-so-little people. In fact, they were huge and unmistakably athletic. They were Richard’s teammates, and they had come along to support his foundation. Although their burliness made it easy to pick them out of the crowd, the players were just as playful as the kids. The likes of Kam Chancellor, Bobby Wagner, Earl Thomas, and Doug Baldwin were tossing footballs, signing t-shirts (as well as scarves, hats, pictures and pretty much any other appropriate surface), taking photos, and playing tag with dozens of giddy children. It was a sensational sight, and I swelled with respect for this kind gesture that would certainly be the highlight of many of these kids’ lives.

By that time, people had finished taking photos with Santa Sherman, and all 25 families (15 from RAYS) were mingling with the Seahawks players. I caught up with Deonta, a middle schooler in our youth development program, after he’d finished a conversation with Earl Thomas. “He’s my favorite player,” he gushed. “And I told him that he’s the best that’s ever played.” I asked him what it felt like to meet so many professional athletes: “Amazing,” he replied with an uncontrollable smile. “They’re a true inspiration to help other people and to work hard.”

The night culminated with Ashley and Richard personally distributing gifts to every family member. Children and adults left with arms, and hearts, full. Personally, I left with a knowing grin on my face because it turned out that Richard Sherman really did have a secret identity: he was, by far, the best Santa Claus I’d ever seen. Go Hawks!