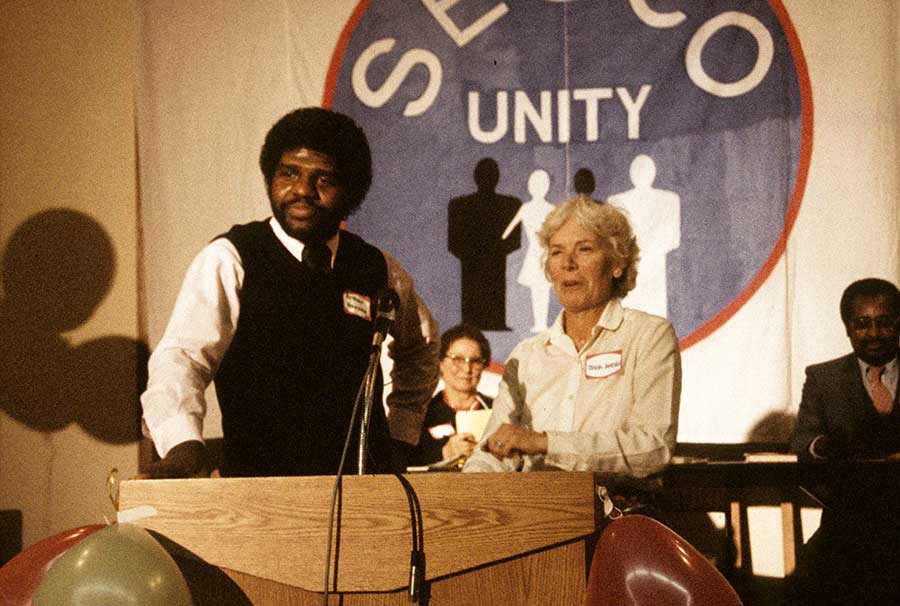 This past September, after an automobile crashed through the building on the southwest corner of Ferdinand and Rainier Avenue, concerned citizens took to the streets. They held a “walk-in,” that took the form of a crowd undertaking multiple crossings of that same intersection, brandishing bright yellow signs that read, “SLOW DOWN! Keep Everyone Safe.” The action was organized quickly and efficiently by local residents who wanted to make sure that their concerns about the safety of Rainier Avenue were heard. They were advocating for a reduction in speeding vehicles through the neighborhood, and by extension, hopefully a reduction in the number of automobile-related catastrophes like the September crash. The issue can not be declared fixed yet, but the important thing is that–unlike many situations where people only take action as far as their keyboard, ranting online about wanting SOMEONE to do something–here were people acting in the space where the actual issue was important and visible.

This kind of citizen action is only one recent example among many in which the residents of Southeast Seattle saw something that they felt strongly about, and activated to fight change, or to fight the status quo, depending on the issue, and which particular side of which fence people were on.

There is historical precedent for this kind of high profile activism in Rainier Valley. In the ‘70s and ‘80s in particular, in response to crime and lack of economic resources, significant improvements in safety and economic opportunity were made through the efforts of concerned individuals and local activist organizations – most notably SEED (Southeast Seattle Effective Development, which was formed by 4 local community activists in 1974), and SESCO (South End Seattle Community Organization, an activist group started by two Jesuit priests in 1975).

Greenwood Gardens ,the notorious housing complex, was one of theissues that galvanized local citizens to action. Their actions eventually resulted in the removal of this ill-conceived and dangerous example of how not to implement low-income housing.

The following excerpts from RVHS’s “Everybody In” project on local activism in the valley provide some insight into the feel of the time:

Financed under a Federal Government program, building Greenwood Gardens required little up front money from the developers but for 5-7 years after they broke ground in 1970, they stood to gain hundreds of thousands of dollars in tax deductions. In return, the developers agreed to a ceiling on the rental rates. Perversely, this arrangement made building the development lucrative, and the business of actually renting out the units and maintaining them a liability. As one early critic of the project’s developers put it “they bought a shelter for taxes, not people.”

Greenwood Gardens was conceived of as a step up from low income housing, with only 25% of its unit rent-subsidized, but this turned out to be more a vague aspiration than a part of the project’s design. The cheapest materials were used throughout. Once occupied, locks, fixtures, and windows around the complex broke and stayed broken.

The numerous secluded areas lent themselves to criminal activity. Fleeing criminals escaped police by entering the vacant buildings and disappearing via one of the many exits. The neighborhood’s worst fears about the project were confirmed in September of 1973 when a man was shot dead in the parking lot.

Just over two years after the project had opened its doors, city inspectors shut down two thirds of the units for fire code and safety violations. In a matter of months, Greenwood Gardens went into foreclosure and the Federal Department of Housing and Urban Development ended up by default the captain of a sinking ship.

But as the housing agencies studiously ignored feedback from the community about the project and maneuvered to save their investment, local resistance hardened. Under the leadership of SESCO area churches, community councils, and citizens who had never pictured themselves fighting city hall joined the fight. Greenwood Gardens became a symbol of outside forces who deliberately used the Valley as a dumping ground where city wide problems could be kept from sight.

The neighborhood’s visceral resistance to what they saw as the government’s design to contain minorities and the poor in South Seattle ran up against a more general public interest in the efficient use of public housing resources and the urgency of the unmet housing needs like those of the Seattle’s elderly population. Greenwood Gardens was fundamentally a clash between legitimate local interests and those of politicians and government agencies charged with addressing larger social problems.

Though today the name Greenwood Gardens is largely forgotten, the fight that began forty years ago over what should occupy that spot on the map was decisive in forming the Rainier Valley’s identity as a distinct place. It defined a fault line that has persisted in local politics between residents and outsiders, neighborhood activists and government and gave residents a vocabulary to describe their struggles that redounds to this day.

Then, as now, the residents of Southeast Seattle did not sit by passively when there are issues of safety and equity that need to be addressed. The people here care, and are willing to voice their concerns to the people who have the power to effect change for the betterment of everyone.

More from the “Everybody In” project can be read on the RVHS website [link to http://www.rainiervalleyhistory.org/What%20We%20Do/everybody-in].