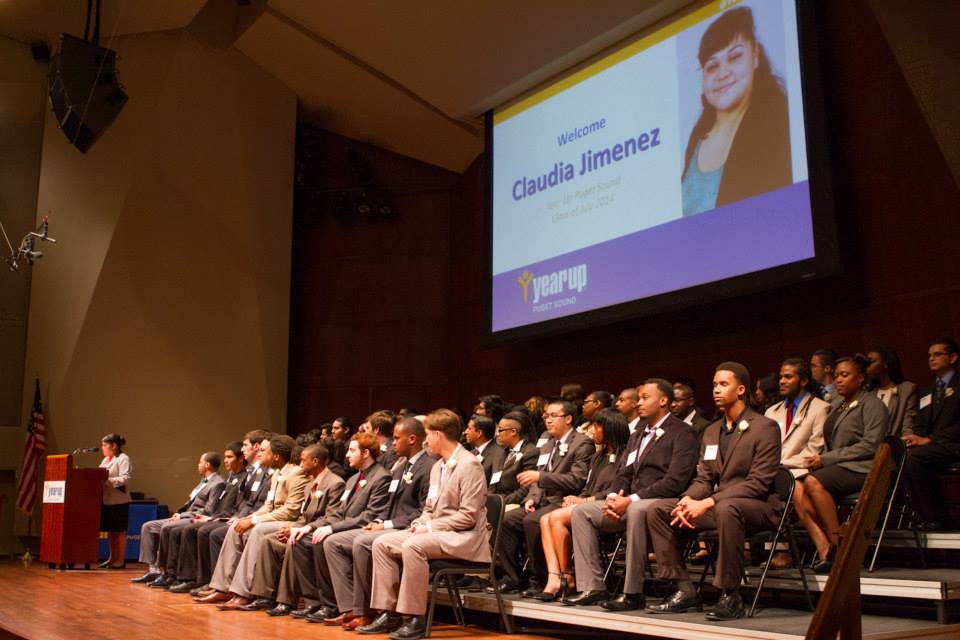 For many South Seattle youth the chasm runs long and deep. It separates them from fully realized prospects – stranding them at the fringes of undeveloped potential and diminished lives. Its boundaries stubbornly widening ever farther, leaving a persistent divergence between the youth of the city marked for success and those marked for mediocrity.

Deemed the “Opportunity Divide”, it is the division that many South End residents feel has been a pernicious symptom of a prolonged dismissiveness to the plights of area youth and the schools charged with prepping them to thrive in the midst of an ever shifting economic landscape.

The divide plays out in a narrative all too familiar to many South End area youth; a lack of financial and community resources severely limits their access to higher education (tuition for Washington State colleges has increased over 61% since the recession) and a salary that allows them to meet basic needs in America’s fastest growing city.

Often left with a grab bag of consolation prizes upon completion of high school their options are akin to the following: A) Military B) Perpetual employment at minimal dead end jobs  C) Circumspect entry into the murkiness that is the “urban pharmaceutical” trade.

However, if the Year Up Puget Sound program has its way, opportunities that once seemed frustratingly elusive to South End youth will soon be battering down their door. The 15-year-old non-profit “opportunity broker” (who is focusing its efforts on recruiting participants from the South End) assists young adults between the ages 18-24 in acquiring job and life skills that not only make them attractive to an employer, but that they can “pay forward” to other youth within the community – serving as a much needed supplement to what currently passes for public education in the area.

The dual purpose of the year long program (hence the name) is to showcase to skill based employers that South Seattle is rife with a rich pool of young talent to draw from, and to give evidence to area youth that they have no reason to settle for anything less than their talents allow. South End youth currently make up 60% of participants in the program.

Youth spend their first six months in Year Up cultivating technical and business etiquette skills to use in the boardroom via a rigorous boot camp style training sessions that would make contestants on The Apprentice tap out in quick succession. The last six are dedicated to working an internship at one of the program’s over 250 corporate business partners – which include Starbucks and Amazon.

The Emerald spoke with Jessica Norouzi, the Associate Director of Admissions for the fledgling program, on just how Year Up Puget Sound plans to inch the opportunity gap ever closer together for South End area youth.

Emerald: Could you expound on the idea of how Year Up is seeking to close the “Opportunity Divide” for young adults in the South End area?

Jessica Norouzi: The mission of our organization is really to bridge that divide. What that means is that we’ve identified across the city, and specifically in the South End area, young adults who graduate high school or have their GED and aren’t currently on a living wage career path or enrolled in post-secondary education. The reason behind this is not because they aren’t talented or motivated, it’s simply because they have a lack of access to resources and the right skills to be able to advance further.

On the other end of the divide, it’s been identified that there are millions of open positions nationwide and corporations are looking to fill those positions with talent. So we help to connect young adults who are between the ages of 18-24 to access these opportunities by providing them with the right skills and connections they need. We also work with employers to help them view those young adults as a pipeline of talent, regardless of what their background is. We ascertain from employers what skill sets they need that they can’t currently find in the marketplace, and help our young people acquire those specific skills.

Emerald: Your program has been extremely successful in the Seattle area with over a 90% placement rate – meaning that 90% of participants in the program have transitioned into either full time work or college. That rate is higher than any South End area high school’s graduation rate last year – Rainier Beach (69%), Cleveland (69%), Franklin (74%). To what do you attribute the programs success?

Norouzi: I think it’s due to the fact we set really high expectations for our students and we build support around those expectations, so they can meet them. The expectations reflect what employers are looking for in the professional world. So that means we don’t bend on things like being here on time, proper communication, and dressing professionally because those are the standards that are going to help them get hired – in addition to making sure they are learning the skills that companies are really looking for.  We want to make sure that young people are prepared for the demands of this program so that they can be set up for success to start a career within a year. We have several steps in our application process to make sure we are admitting students who are both ready for the program, but are also in need of the services we offer.

Emerald: There’s a narrative that claims that the reason discrepancies in employment and wages between southern and northern youth of the city persist is because of a failure of “personal responsibility”, but Year Up adamantly rejects that notion, yes?

Norouzi:  Working here you see the sheer will and drive of these young people. In dealing with them you also see that it is a systemic access to opportunities that has not allowed them to progress. A lot of the young people we work with have tried going through a traditional community college system and weren’t able to persist for one reason or another – much of it is finances. So, the fact that they can come here and get multiple layers of support, and it’s a free program that allows them to also earn a cash stipend during it, really alleviates some of the traditional barriers to success students would traditionally encounter. I can say that it isn’t laziness or lack of motivation, at least from what I’ve seen that stops kids from moving forward. Every six months we get at least a thousand people who express an interest in our program and we can only accept 80 of them. There’s a hunger for what we’re doing by people who want to seize this opportunity. When people don’t know something like this exist it’s hard for them to have hope when they’ve had doors constantly shut in their face.

Emerald: You place a lot of your students in internships that are located outside of the South End area. I’m assuming that’s out of necessity?

Norouzi: There’s a huge need in the South End and we’ve tried to find companies in the area, but there just aren’t as many corporate opportunities in that vicinity. We know that it’s another challenge to ask students not only to wake up to come to Belltown at 8:15am, but then to also commute to places like Bothell, Redmond and Bellevue from South Seattle. Again, it speaks to how motivated and driven the students in our program are. It’s also a reminder about how prevalent the opportunity divide is. It’s not just about access, but also geographic location.

Emerald: What do employers seem to appreciate the most about those who come from the Year Up Program?

Norouzi: Employers say that they really appreciate not needing to teach Year Up students the soft skills that employees should have. They don’t need to tell them what they shouldn’t be doing because they’re not doing it. They’re showing up to work consistently on time. They’re there ready to work  and they’re dedicated. Most employers are more flexible with teaching our students the hard skills they need.

I like to say that our contract is a supporting teaching tool. Every time a student violates something on that contract they earn an infraction. We use that language intentionally ,”earn”, and when they earn an infraction they lose a point on their contract. Points are correlated with stipend dollars, so they also lose money on the paycheck they would received that week. We will talk to them about what’s going on and help them find strategies to address them. We want to work with them to work on these things. While we do hold them to the same expectations that a career would, we have conversations to see how we can make sure they meet those expectations. We’re empathetic so we do have ways that they can build points back up.

Emerald: I’m sure that you’ve had many, but is there any particular success story of someone who went through the program that stands out to you?

Norouzi: I can give you one example of my first advisee, but the list goes on and on.  I met her while she was in the process of getting her GED. After I was done giving a presentation to her GED class she expressed an interest in wanting to learn more about what we did. I told her if she wanted to do Year Up she was going to have to get her GED so that really motivated her to get on the ball. She got it and I ended up interviewing her for the program.

She initially had some things that she really needed to think about and work out. I assisted her in trying to get everything arranged so she could be successful in our program. When she first entered she wasn’t the most exceptional student and had some bumps in the road, but she kept figuring things out and learned how to adopt the kind of professionalism that companies are particularly looking for. She built up her confidence and after the first 6 months of the program and she was placed in an internship. The company she was at was really impressed with her and continued to give her new opportunities. Right before she graduated they offered her a full time job with full benefits, and really competitive pay. She was able to provide for her family in a way she had never been able to before and set a really powerful and positive example for those in her community and family. She’s been working there for two years and been one of the top people who have referred  friends and family to us. A lot of people who she has sent to us are currently thriving in this program and it all started with her.

For more information on Year Up Puget Sound you can contact Jessica Norouzi at jnorouzi@yearup.org or visit www.yearup.org/apply to be invited to an info session.