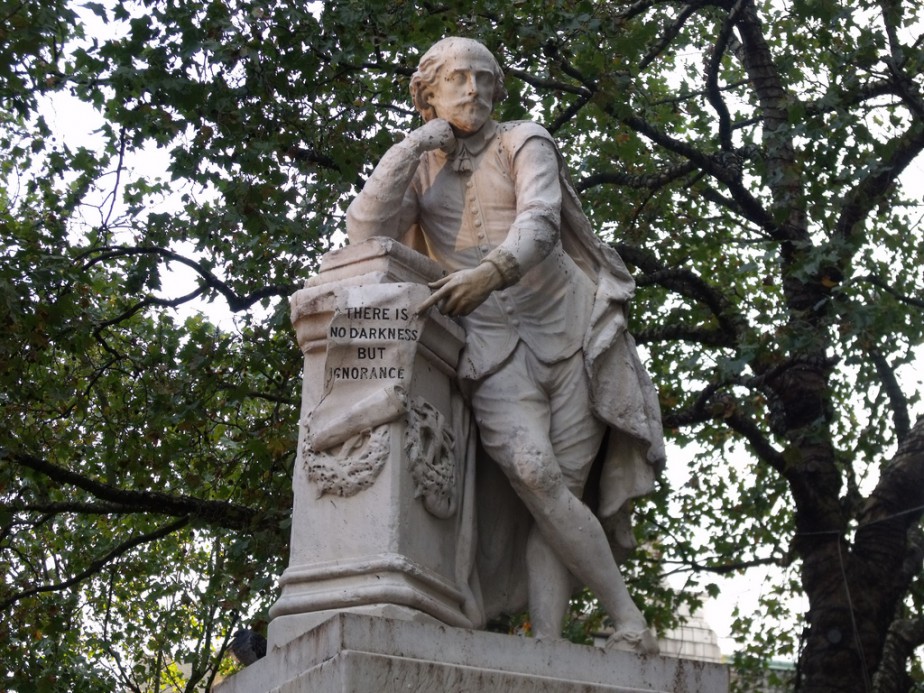 Sweating, 40 year old dudes eating peanuts. College-age kids in casual attire swigging beer and laughing too loudly. Crowds of people packed into standing-room-only arenas. Sound like a concert? Maybe an outdoor movie, or a festival? Perhaps a boxing match? Oh no. This is Shakespeare.

I’m sure about 75% of you have heard the tired old adage about Shakespeare being written to speak to the masses, for the people, yada yada yada, before. Yes, theater in Shakespeare’s day was for the poor folks who wanted a laugh or a cry. True, it was demonized as scandalous, impractical, common, vile, and any other negative term you want to throw in (assuming you say it in Old English). Actors were looked down on, directors were scorned, and Shakespeare was pretty damn poor for the first half of his life. We know all of this if we’ve taken a high school or college course in English, and some of us have even put together that even though Shakespearean English sounds snooty and high-brow now, it was the common folks’ tongue back in his day. So what?

Aside from being curious, as a performer and director and artist, why the ritual of attending theater has changed so much, I’m bringing this tired old fact up again because I am truly concerned. Concerned because theater, the original art medium created by the masses, for the masses, has become almost exclusively an elitist activity. There is a giant gap between the Americans who go to the movies and those who buy season tickets to the Seattle Rep. And even more telling, those Seattle Rep ticket-holders are nothing like the folks getting a few tickets to Annex’s latest concoction, or catching the Matcha Monkey play. The moms and pops buying acting classes for their precious children at Studio East may see a 5th Ave show, or five, every year, but have they taken a jaunt down to Inscape Arts to check out the latest devised work from The Satori Group? No. And have the hipsters in their 20s who frequent Inscape bought a ticket to the Paramount in the past year? Only with their parents, perhaps.

Yes, it’s money. Yes, it’s convenience. And yes, these are HUGE factors that should be taken into account (no way in hell am I paying $52 to go see a musical I can watch on YouTube, let’s be real). But more than that, it is the general lack of willingness to branch out from the known and try a taste of what might be scary, weird, or different. It is ensembles, collectives, and theaters who are terrified to reach out to people who might not “get it”, or even like it, who don’t have a liberal arts degree, who have no idea what the terms “Viewpoints” or “composition work” mean.

The average Seattleite is afraid. Afraid to try something new, to sacrifice an evening of Redditing to have an experience that might suck – but might also change them forever. And artists are right there with them. As much as we claim we want to expand our audience base, bring new faces in, do we really invite those people? The fear that we’ll have 20 people at our production who “don’t get” our work stops us from branching out from our constituent base. Much like a bunch of college kids in a UW Poli Sci class, we only voice our opinions to people we know will agree. And so each group sacrifices a new experience that could change them for the much, much better.

So start perusing the Stranger Arts section, all you soccer moms and Seahawks fans. Type in “Seattle fringe theater” into Google and see what’s happening around you. Go to things that suck, things that rule, and things that are just plain weird. And artists? Reach out to them. You never know who you’ll find in that crowd of peanut-munchers.

Or, you know, my company: www.thehorseinmotion.org

Mary Hubert is a performing artist, director, and arts administrator in the Seattle area. When not producing strange performance concoctions with her company, the Horse in Motion, she is wild about watching weird theater, whiskey, writing and weightlifting