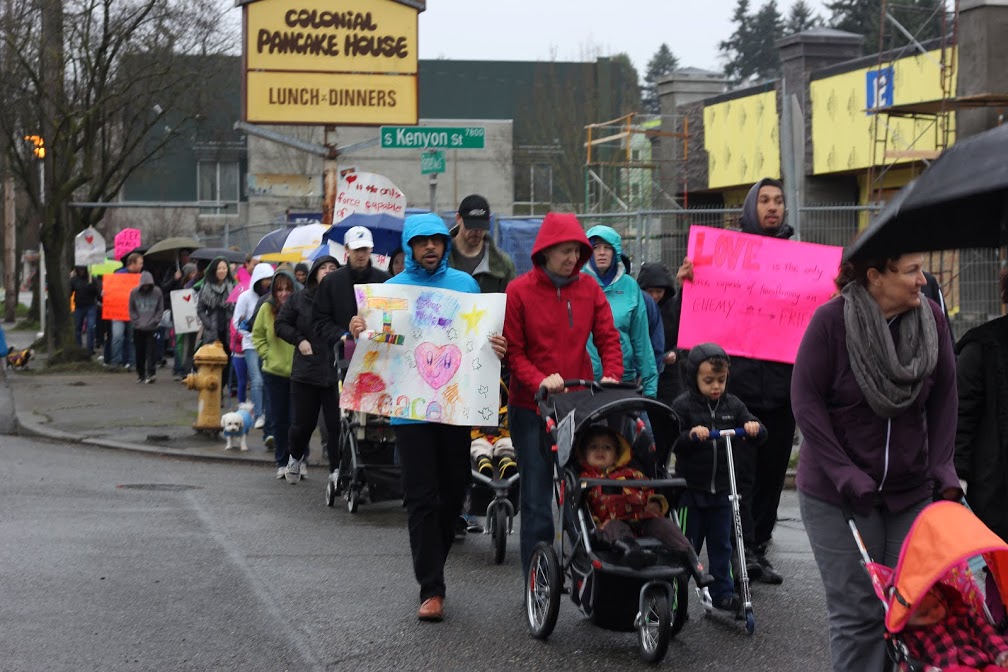 A large and moving crowd had residents in the South-end asking questions on Saturday morning. Why were folks walking, talking, and singing aloud on a rainy morning? Who were these people holding hands and linking arms along Rainier Ave. South, their children marching beside them? The sight along Rainier Ave. South on MLK weekend evoked the spiritual legacy of peace marches during the civil rights. Here in South Seattle in 2015 were Christ-followers—200 deep—marching for peace and praying for an end to violence in South Seattle.

A cadre of millennial leaders organized this peace and prayer march in partnership with local clergy and community elders. The march, which began at Emerald City Bible Fellowship, ended at King Donut Teriyaki, both long-standing hubs in the South-end community.

In less than ten days organizers planned the peace march. They invited all ages and families from across Seattle, spreading the word through social media. Urban Impact’s Freedom Schools scholars led the crowd in Harambee cheers and chants at the beginning of the march. The children’s participation highlighted the importance of their historical involvement in social and spiritual movements. Peter Chin, who co-organized the march, is lead pastor of Rainier Ave. Church, a parish that has been in Hillman City for over 100 years, said, “We want to communicate to this community that as Christians we are peacemakers. Not just with signs but with prayer.”

There were three stops along the march route where leaders and marchers intentionally prayed for different issues affecting the Rainier Valley. The first stop was Rose Street. One leader said, “we pray that each member of this community would be agents of peace. But that being peaceful does not mean being passive…” She then stated a statistic “Rainier Beach there are 1331 family households, 75% are renting, 41% are single mother households (one of the highest % for a neighborhood in the city).” She continued to pray that “a single mother never has to raise her children alone, that a child never feels unloved, that immigrant & refugee families have help navigating systems here…”

The heartfelt prayers coupled with statistics echoed a cry for peace. After two more prayer stops and prayer themes including gang violence restraint and wisdom for police, education, and unity. At the end of the march, organizers collected donations from the crowd in order to bless the family of the King Donut business owners who had been assaulted and beaten. They symbolically bought a donut for $1,200, the amount of money they raised that morning.

Gregory Davis, long-time community activist and community builder said he viewed the peace and prayer march was a “turning point for our community.” Towards the end of the march and close to Henderson Street, South Seattle residents were honking their horns as they passed marchers holding signs that read, “blessed are the peace-makers.” Organizers are saying this is a beginning, not the end of something new among the Christian faith community in South Seattle and beyond.

drea chicas, who prefers her name appear in all lower case letters, lives, works and worships in South Seattle.