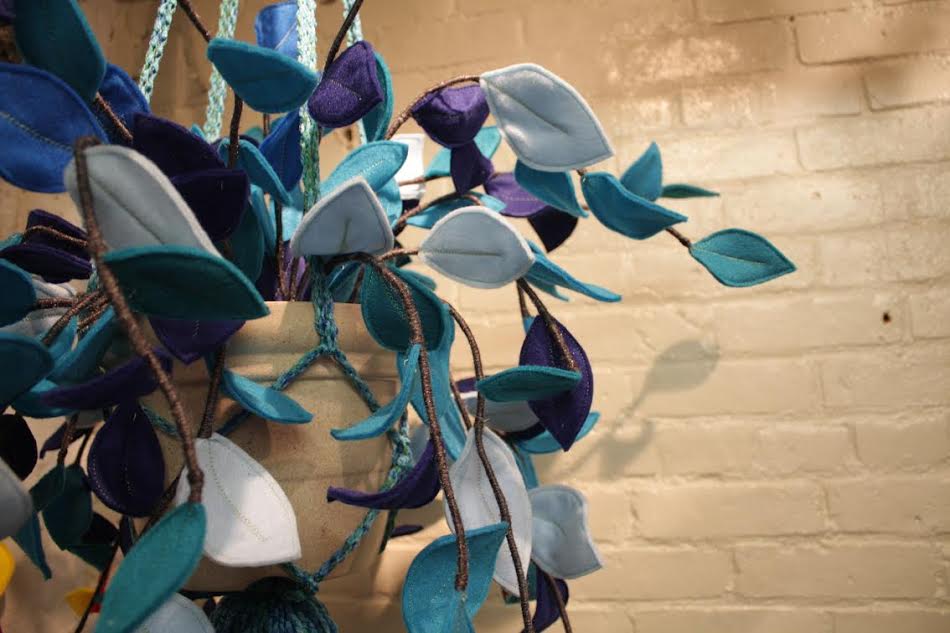 Mary Clymer isn’t your typical matchmaker. Not only is the acid callousness and abrasive personality that characterizes many with that moniker (at least if you take your cues from reality television) absent, as the congenial Clymer could carry on an enchanting discourse with a street lamp, but instead of finding “the one”, her mission is to make sure a piece of the lovelorn souls she counsels winds up in the arms (or on the  walls, desks, shelves, window sills and night stands) of as many suitors as possible.

For the past 3 years Clymer has made a business of connecting South Seattle area handcrafters and their one-of-a-kind works with galleries, Seattleites wishing to escape the banality of generic goods and pretty much “anywhere that will provide space” to showcase her clients’ work.

This devotion to trumpeting the work of artisans who labor painstakingly with calloused hands to create consumer goods not easily duplicated is what brings her to Hillman City’s Tin Umbrella Coffee on a Friday morning. She’s removing a set of beautiful faux irises crafted by one of her clients that decorated the shop’s walls for the past month.

“She’s like the Don King of art promoters, but with way better hair,” raves Tim Umbrella Coffee owner Joya Iverson, who was one of the first South End business owners to give temporary shelter to the handcrafted items belonging to Clymer’s clients.

“Artists, especially in Seattle, are wonderful at creating work, that’s one side of the business. Unfortunately, many aren’t as good at the shameless self-promotion side of it,” laughs Clymer so heartily it causes the surrounding patrons to smile.

Renton-born and South Seattle bred, Clymer could not be better suited for her chosen occupation as the owner of Happy Delusions. She is a natural when it comes to marketing and being a hand-crafter herself (she knits and works with felt fabrics), which has allowed her to recognize the unique challenges faced by most of her creative clientele in a profession that is looked at as a “niche” industry and is traditionally undervalued.

“When people say ‘arts…oh, and crafts’ they are already devaluing what we do. It’s hard to understand that people will scoff at paying $500 for something someone put hours of their life into creating with their own two hands, but will then go to Ikea and not think twice about paying $200 for what amounts to a $20 piece of art,” bemoans Clymer.

Clymer, who uses the terms “matchmaker” and “arts promoter”

interchangeably in describing what she does, first developed the idea of acting as a link between struggling artists and the regular Joes who were hungry for their work but just didn’t know it after returning from a several years long pilgrimage to the nation’s two arts meccas, first New York City and then Los Angeles.

“New York, with it’s arts community was a great experience; Los Angeles was too in making me see what South Seattle could be if we gave the same type of attention to our arts community up here.”

It was from these years of living the “stereotypical” artist life – and managing a crafts store – that she saw first hand the struggles that artists (no matter how talented) had in getting their work noticed, which led many to be unable to sustain themselves financially. “The whole narrative of the malnourished artist and an arts degree being a prerequisite for a barista job is pretty true,” Clymer chuckles.

She knew exactly what they were lacking: a tenacious mouthpiece who would champion their work.

After Los Angeles lost much of its magic for her (“It was like everyone was a walking brand after a while. Just having an authentic conversation with someone became tough,” recalls Clymer), she moved back to the South Seattle area, and after a couple of fits and starts she was able to corral a sizable clientele to form Happy Delusions – something that Clymer says was a lot easier than most people would think.

“I saw a community that was in need of a voice here. Artists just literally came to me after hearing about what I was offering. The crafts community is growing and I’m glad to be a voice for them on the city and state level,” she says.

The crafts promoter, who has placed her clients work in an array of venues from coffee shops and high end galleries to residential homes during neighborhood viewings (Big Chickie has even expressed interest in displaying some pieces), feels that South Seattle is sitting on a gold mine of talented craftspeople who just need to be unearthed. She, for one, has her shovel ready.

“This area is so diverse, so of course you’re going to have many unique artists here. We just don’t get some of the notoriety that other neighborhoods get. I think a part of that is that other than City Arts (Magazine) most residents rarely know what’s going on arts-wise in this city. New York and Los Angeles unfortunately have us beat there.”

Never one to accept common orthodoxy, the artisan matchmaker feels that the success she’s had in curating artists flies directly in face of what she feels is a stubborn misconception – that Seattle’s art scene is anemic.

“Seattle has a major arts scene. It’s just that it’s underground and passive. What do you expect from us? This is Seattle,” she jokes, as she laughs her infectious laugh while placing her clients irises into a box to haul them back home.

What is no laughing matter to Clymer is her belief that what she does goes beyond simply being a “middle man.” She adamantly sees herself as helping to catalyze a resurgence in hand crafted goods.

“I think overall, people have become fed up with generic, homogeneous gifts. They want stuff that feels ‘organic’ and equates to a local artist. They want to know that no one else can purchase an item anywhere else other than in the local area they happen to live in.  They want to feel a connection with someone’s work. That’s really beginning to resonate again with people. Sure, there will always be room for the Targets and Wal-Marts, but no gifts are as prized as those that are handcrafted. Their value is way beyond financial,” proclaims Clymer.

While she continues to work on behalf of her clients, ironically enough the perpetually effusive Clymer goes mum when talk turns to her own handcrafted creations. “I’m really self-conscious about my art. I’m so much better talking about other people’s. I guess I need my own promoter.”