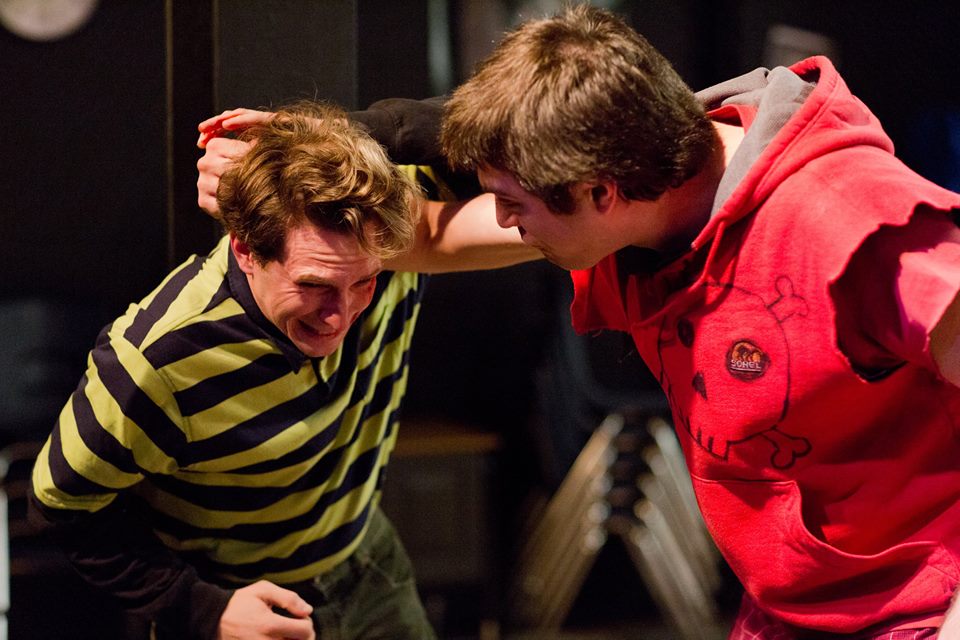 The Fourth Graders Present an Unnamed Love Suicide is a title that speaks volumes, to say the least. On the surface, it depicts a play that is funny, potentially heartwarming, and a bit edgy. The play, performed by Ghost Light Theatricals, seemed like it tried to do just that. Unfortunately, despite the awesome venue, free drinks, friendly house managers, and an ensemble that was on the whole talented, the piece ultimately failed to land.

The premise is as follows: A class of fourth graders give a presentation that is actually a play written by one of their dead classmates, Johnny, who has recently committed suicide. Sound multi-layered, issue-centric, and intriguing? Sure. And it could have been. However, the script, which may actually have been written by a fourth grader, combined with some very strange stylistic choices, made the piece disjointed, emotionally stagnant, and just plain confusing. The bulk of the actors gave broad, stereotypical impersonations of children more suited for an opera house than the intimate Ballard Underground space, the script was laden with strange spiraling monologues that did nothing to further the plot, and the design’s attempts to utilize multimedia in the form of a projector, while cute, ultimately did very little to further the central themes and issues that the play attempted to tackle.

The primary problem with this piece was that the playwright wrote the script as if a kid had written it. Sure, this makes sense, given the plot. And I can think of a few scenarios where this would be an effective writing strategy to get your point across. However, they mainly did this by writing long speeches that had no place in the script, and by eliminating all contractions in favor of over-formalized text. I understand where they were coming from, but the result read like bad writing without an added layer of childishness. The mix of child speak, over formality, and adult lingo didn’t flow well, and the scatteredness of the plot, while perhaps accurate to how a fourth grader would write, didn’t serve storytelling in the slightest.

Ultimately, as an audience member I found myself wanting to see more – but not in a positive way. More prevalent plot arcs, more character development, more ties to the larger community. Sure, “real life issues” like eating disorders, bullying, and romantic tension were crammed into the framework of the fourth grade, but the conversation seemed superficial and felt like a lesson rather than dramatic action. The commentary on suicide, bullying, and kid violence seemed random and unfocused. The performances seemed studied, rather than natural, and the honesty of children was buried beneath actors’ consciousness of their age. I wanted to see actors playing fourth graders who were in turn playing characters, but instead I got caricatures of what “everyone” supposedly did when they were 9. This lack of specificity made the issues less profound, and felt like a trivialization of serious problems.

Don’t get me wrong, there were some moments that I absolutely loved. The comedy was spot-on – a particularly hilarious running Pledge of Allegiance joke kept me chuckling, and certain winks at the audience kept me engaged. Additionally, the stage combat was excellent – in such an intimate space, it can be difficult to pull off, but I was sold with every slap. The piece had a certain reminiscent quality that I also enjoyed – the winks at the young adults in the audience made the piece feel relevant to those of us in our 20s, and the topic made me re-think my elementary school days. But ultimately, if you want to tackle a play about child suicide, and have all of the characters be 9, you have to rely on more than jokes and a projector to carry the story.

The Bottom Line: Despite the significant problems with the script and some very inconsistent acting, the play succeeded in one thing: it made me think about where I was in fourth grade. I appreciate what Ghost Light is trying to do, and I think the ideas in this story have some amount of potential. Just with a new writer.