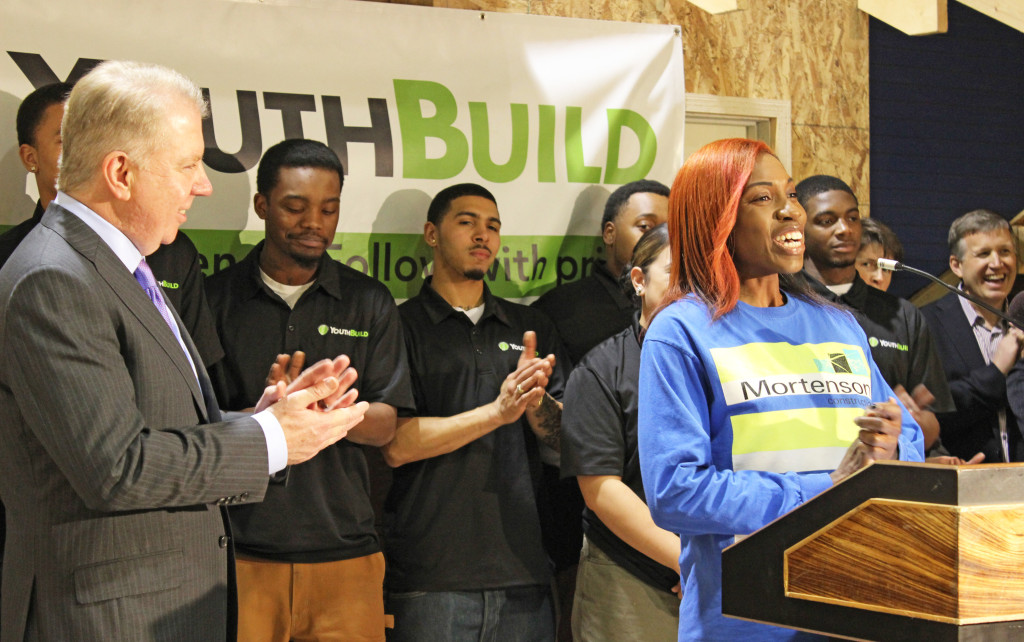 SEATTLE (Jan. 29, 2015) –  In a move seen as a boon for the South End community Mayor Ed Murray, city councilmembers, construction contractors,  and workers today celebrated the signing of Seattle’s new priority hire law that will bring more jobs to disadvantaged communities through City construction projects of $5 million or more.

“This law is a major move to support workforce development for areas in our region that are being left behind,” said Murray. “This new priority hire ordinance ensures direct access to training programs and construction jobs. New city streets and community centers will not just benefit all of us that use them, but also local workers seeking a career in the trades and earnings to support a family.”

The ordinance will improve access to construction employment and improve training programs for workers in need of family-wage jobs, while minimizing increased costs on City projects. The proposed ordinance would prioritize the hiring of residents that live in economically distressed areas in Seattle and King County.

“With this bill, more Seattleites who have faced barriers to getting into construction careers will reap the rewards of both a well-paying job in the short-term and portable skills for the future,” said Councilmember Sally J. Clark, the legislation’s sponsor and chair of the council’s Housing Affordability, Human Services and Economic Resiliency Committee. “This legislation has been a team effort all the way through and the community of social justice advocates has been invaluable in getting us this far. The impact of this bill for people in Seattle will be far-reaching and lasting as more people find the training and careers to change their lives.”

The ordinance will use poverty levels, concentrated unemployment and gaps in educational attainment to identify economically distressed communities by zip code, with the aspirational goal of increasing construction career opportunities for women and racial minorities.

“Using our local tax dollars to put people from communities in our city with higher unemployment to work just makes good sense,” said Councilmember Mike O’Brien, co-sponsor of the legislation. “I am proud of the step we are taking today, and I also want to acknowledge the incredible community organizing that began years ago to bring this bill to fruition.”

“We are standing here today to boldly say we know we have great, qualified local workers, so let’s keep these jobs in this City and foster career opportunities for our community,” said Councilmember Bruce Harrell. “This was an inclusive process with our local workers, contractors, labor, and social and environmental justice advocates.”

The ordinance increases existing requirements for contractors to hire apprentices – between 15 and 20 percent of positions – and introduces requirements for hiring of graduates from local pre-apprentice institutions. The City’s Department of Finance and Administrative Services (FAS) will support pre-apprentice and apprentice programs to increase graduation rates and worker retention, including concentrated recruitment of Seattle and King County workers, scholarships for tuition, boots and tools, and providing classes. The goal of the new law is to give access to careers in construction – from pre-apprentice, to apprentice and journey-level worker training.

The ordinance also directs FAS to execute Project Labor Agreements on projects meeting the $5 million threshold to provide the means to meet priority hire objectives and help avoid the risk of labor stoppages and/or shortages.

“The Building Trades is excited to be part of this historic agreement to improve community inclusion in the construction industry,” said Lee Newgent, Executive Secretary, Washington State Building and Construction Trades Council.

“We need to get more diverse people into the construction trades and help those trade workers who live in Seattle to hold good jobs,” said Connie Gersberg, owner of Metro Painting, LLC. “This ordinance will make the field better for local workers and help small and disadvantaged companies have a better chance to compete.”

The mayor signed the ordinance at the Georgetown Campus of South Seattle College, home to YouthCare’s YouthBuild program and other educational opportunities that open the door to careers in the construction trades.

“We know that jobs are the solution to youth homelessness, young adult poverty, and youth violence,” says Dr. Melinda Giovengo, Executive Director of YouthCare. “Priority hire offers an opportunity for graduates of pre-apprentice training programs like YouthCare’s YouthBuild to find stable, career-path jobs in our community, and have an opportunity to shape the future of Seattle.”

“This Priority Hire Ordinance will allow me to start my own career right here where I live, not just get a job, but give me the chance to actually build the city I live in and raise my daughter,” said Aikilah Eslava, a student at South Seattle College.

The Emerald will be running an analysis of what impacts the ordinance might have for the South End community.