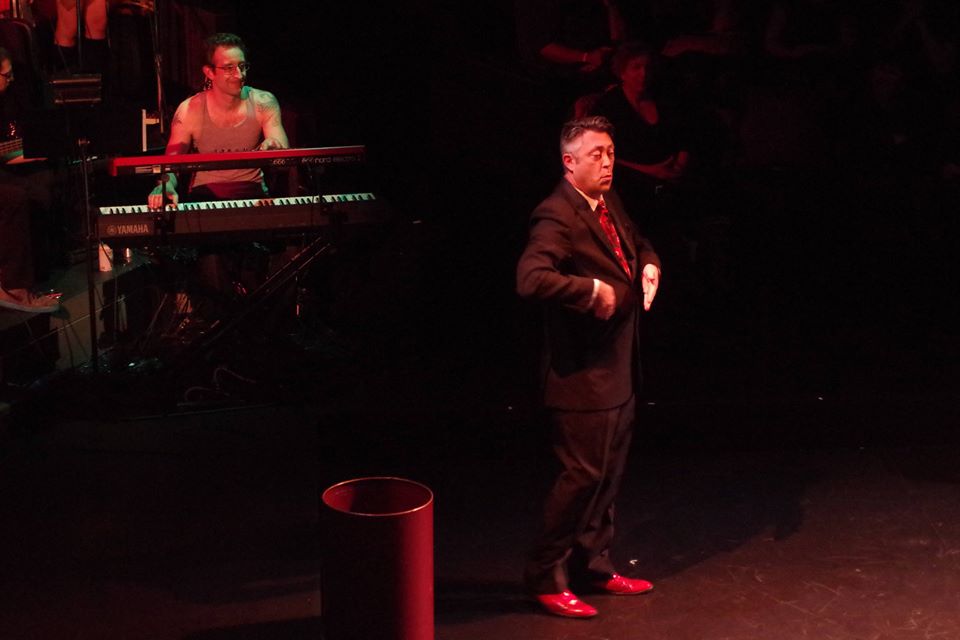 As I waited with mildly tipsy anticipation for the start of 14/48: Kamikaze, I heard what sounded like a bad karaoke version of Bow Down Bitches. And lo and behold, I was almost right, as I turned and saw three ladies who were clearly NOT singers dressed in sexy lingerie and prancing into the center of the theater. They gave a very entertaining musical rendition of the chant before joining the band and continuing to sing in their endearing, mostly-on-pitch voices, until the first play came onstage, an absurd rendition of a double dare game that culminated in some rather pointed commentary on Seattleites’ propensity for arbitrary judgment.

You might be asking what this strange phenomenon is. Here’s the pitch: 14 plays are written, directed, designed, and produced in 48 hours. Each director directs two plays, each actor is in two, and they perform 7 and 7 on Friday and Saturday night of the same weekend. Sound dangerous? Kamikaze was even more daring. This was the first 14/48 in the round, and to top that off, in this rendition the participants had to draw out of a hat what they would be doing. Designers were directing, directors were singing in the band, and actors were writing plays.

You might expect that this could lead to a cluster fuck, and it’s true that some of the work felt a bit less polished than usual, even for 14/48. But this was actually my favorite 14/48 of all I’ve attended so far. When a bunch of self-proclaimed playwrights, actors, and directors make art quick and dirty, the result is sometimes beautiful and other times feels indulgent. Strip these talented-as-hell individuals of their comfort zones, however, and the result is all of the entertainment with none of the pretension.

Most of the plays were hilarious. A film noir with a hefty twist was my favorite, with a perfect cigarette-wasting bit that was both hilarious and horrifying. Two dancing competitions both provided some laughs, and others, including an elementary school play-pretend, combined funny with profound in 10 minutes. True, some of the plays weren’t the best. True, some of the acting was a bit weak, and the design looked a bit makeshift. But it was these elements that made this round of 14/48 all the more entrancing: it reminded me of college, when everyone would pitch in regardless of what their specialty was to make some art.

I usually try to add a critique into my articles. But to be honest, this event is so much of its own animal, so wacky and wonderful, that I don’t really have one. My only hope is that more than the theater nerds of Seattle start attending this event. It’s a gem.

The Bottom Line: Though 14/48s can be rather hit or miss, I had an absolute blast at Kamikaze. This brave, funny, crazy work deserves a shout-out, and I for one will be cheering on Young Ones and Old Guns at the Cornish Playhouse in a few months. Y’all should too.