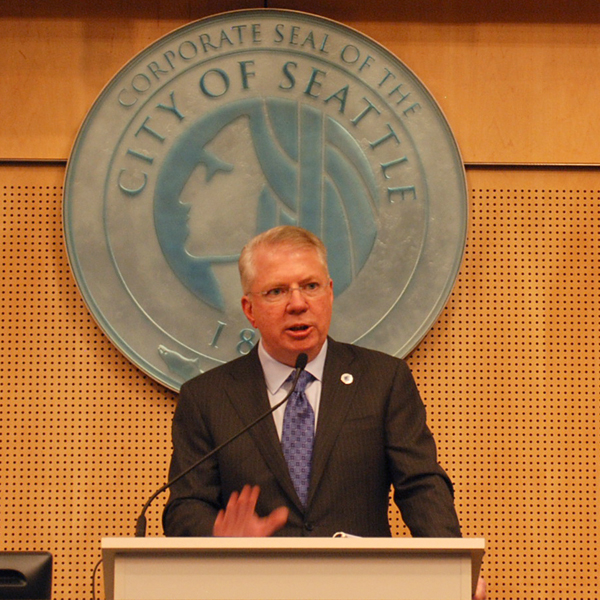 The mayor cited 2014 advances in city policy on minimum wage, parks funding, transit, preschool and other issues, underscoring the need to deliver these initiatives in 2015.

“Last year, we showed how progressives can work together to make government function and improve the lives of the people of this city,” said Murray, “We must remain committed to implementing these achievements: following through and getting it right is just as important as getting it in the first place.”

After raising the minimum wage, Murray called housing “our next great challenge to affordability.” The mayor and city council launched a work group of housing experts last September, which is developing a slate of policies to support affordable housing for individuals and families across the income spectrum.

The mayor is reserving $15 million from the Seattle Housing Levy and $20 million in incentive zoning funds to implement the recommendations of the Housing Affordability and Livability Advisory Committee, which are due in May.

The mayor today unveiled Performance Seattle, found at performance.seattle.gov, a government performance website where the public can review city department goals and track outcomes. The site is launching with nine departments, and others will be added throughout the year. The public will also have better access to information about city finances through OpenBudget, located at openbudget.seattle.gov.

The mayor invited high school students from around the city to attend the speech, noting that they “are coming of age at a time of unprecedented growth and change” as Seattle grows faster than surrounding suburbs for the first time in over a century.

After increasing the city’s commitment to summer youth employment by 50 percent last year, the mayor pledged to double it in 2015 to 2,000 jobs.

The City is revising its Comprehensive Plan this year to guide the development of housing for 120,000 additional city residents over the next 20 years. The mayor committed to digital outreach, telephone town halls, a second Neighborhood Summit and other ways engage the public in the process. In the coming days, the mayor will send a resolution to Council that recognizes race and social justice as one of the core values for the Plan.

After expanding transportation options in 2014 with Uber and Lyft, Pronto bike share, car-share services and additional bus transit, Seattle will renew its expiring transportation levy later this year. The mayor announced a new unified transportation strategy, called Move Seattle, which will map out future infrastructure improvements to be funded in the next levy.

The levy will fund maintenance of existing roads, bridges and sidewalks, and make additional investments “to build a safe, integrated transportation system with an expanding variety of choices available to all,” said the mayor.

Seattle will continue to seek authority in Olympia needed for further expansion of Sound Transit’s light rail system to Ballard and West Seattle, even as the Capitol Hill and University of Washington stations come on line within a year.

Calling public safety “the paramount duty of local government,” the mayor noted Chief Kathleen O’Toole’s implementation of data-driven policing and how it is beginning to yield results. After a spike in robberies and property crimes, the department refocused precinct and department-wide resources to the hardest-hit areas. As a result, robberies dropped 25 percent on Capitol Hill and 40 percent in the Rainier Valley. Similarly, property crimes like car thefts, car prowls and burglaries have declined.

“Every community deserves to be served well by its police service,” said Murray. “Our efforts to reform the Seattle Police Department remain a top priority of my administration.”

The City continues to implement reforms to support police discipline and accountability. The Seattle Police Department has already made changes to the disciplinary appeals process, and the mayor is sending more reforms to the council in coming weeks. The mayor committed to additional changes at the department to rebuild the public trust, including:

“These changes are essential elements in our ongoing effort to create the best model for urban policing in the nation,” said Murray.

In his address, the mayor renewed his call for shared responsibility to address the persistent educational opportunity gap between white students and students of color. The City partners with Seattle Public Schools through the Families and Education Levy and, beginning this year, through the new Seattle Preschool Program. In 2015, the mayor will convene an Education Summit to discuss solutions to inequities in academic opportunity and the resulting gaps in student math and reading scores and graduation rates.

“We can no longer allow so many of our children to leave school unprepared for college, for work or for life,” said Murray. “Together, we will close the opportunity gap in our public schools.”

The mayor concluded with a call for a renewed community conversation on the many challenges of racial inequity in the City and across the country. The mayor will convene a Youth Opportunity Summit in the spring to work with African-American leaders and to eliminate the educational opportunity gap, increase long-term employment and reduce juvenile crime rates.

“We must acknowledge how far we have come, but this is the side of the mountain, not the summit,” said Murray.

The mayor’s complete State of the City remarks as prepared are available at seattle.gov/mayor.