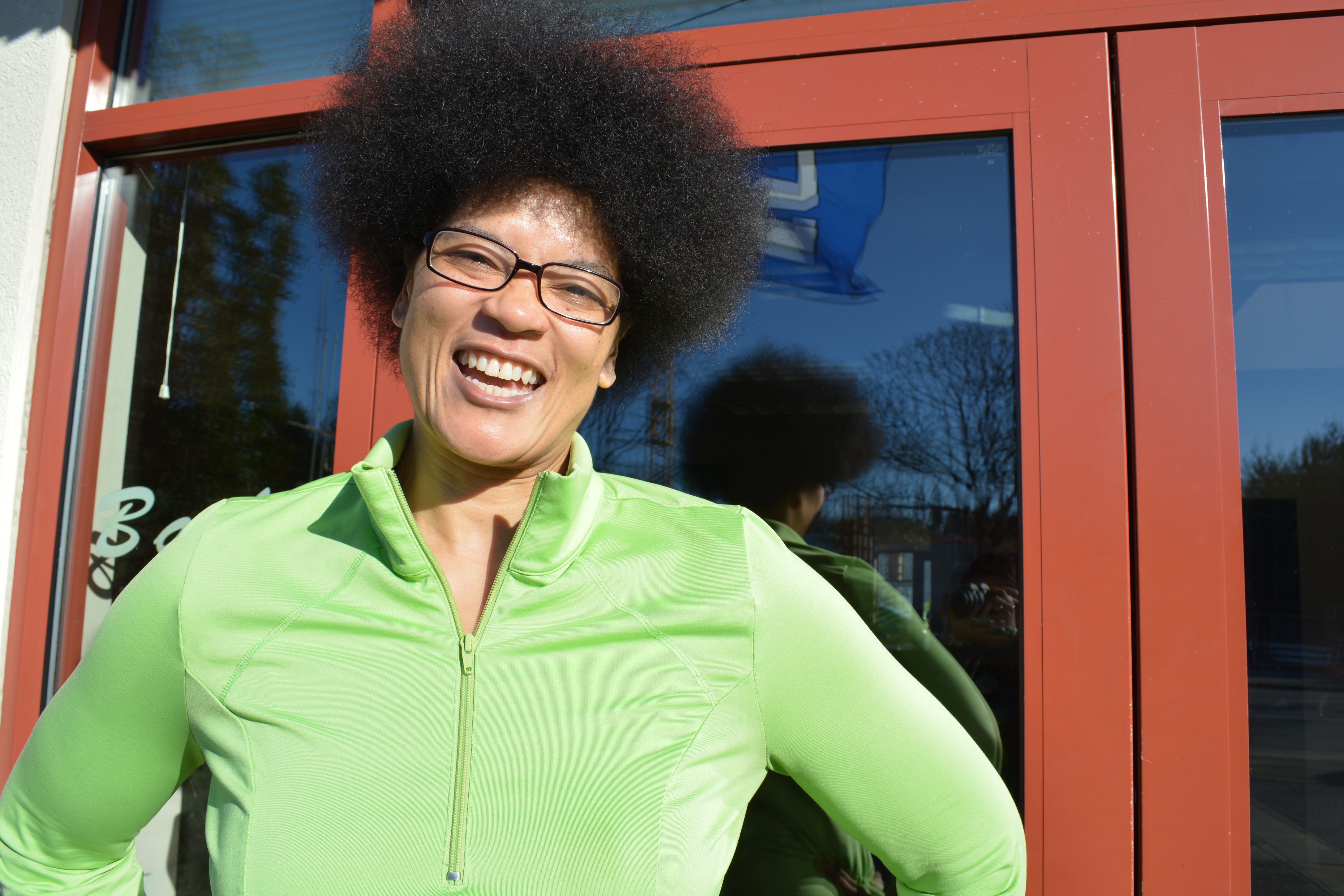 Liz Davis dropped from 400 pounds to 200 pounds in 12 years , but this is not just a story about weight loss. It is a story about a woman who went from homelessness, to addiction, to abuse, to finding her true self, and fulfillment in her life.

After losing her weight, Davis created a walking group  and a one woman show that speaks to her transformation. Davis also does community work, especially within the African-American community in South Seattle.

In her one woman shows, Davis first appears as a 400 pound “fat Liz”, gradually stripping off  her fat suit, as pounds drop to the floor,  to reveal her  200 pound healthy body. Davis is hoping to perform again at the Festival Sundiata Blacks Arts Festival in June 2015 , located at the Seattle Center.

Davis also hosts  walks on the last Saturday of each month. The walks are located in the African Town- Central District. During the event, Davis will walk with participants around the neighborhood according to each person’s abilities.

Sharon Blake,  who is an author of the book Chronicles of Pain: Leaving the Pain of the Past Behind,  met Davis through church, after attending one of Davis’s shows. Blake was amazed by it and invited her to do a performance at a shelter in Tacoma.

“Davis’s show really touched the women, ,” said Blake. “I just saw the women, they would cry, and they would break down because they could relate to her story.”

Davis said she dropped out from the University of Washington when she was 19 years old in 1988 because of homelessness and financial hardship.

“There was dysfunction… some of the issues my brothers and sisters had, there was drug use, there was level of crime, there was just really horrific things that were hitting our family,” Davis said.

With the high level of stress and struggle going through Davis’s family, she became addicted to food and sex, which is also when she started gaining weight. Food addiction caused Davis several health issues.

Davis initially decided to diet and lose weight to please her husband at the time.

Davis’s ex-husband is 16 years older than her and was a security officer at her high school when they first met. She saw hm as a godfather. However, their relationship changed over time.

For 15 years, Davis said she did every thing her ex-husband commanded her to do, even though there was very little love found in the relationship. Davis shared she was able to live with her ex-husband due to a distorted interpretation of Christian love and a misunderstanding of the Bible (1 Corinthians 7:13-15).

“This must be the way of my life. I have got to give in to people in order to be safe, because I had to do that over and over again,” Davis, reflecting on her marriage, said.

Throughout her marriage,  though Davis lost weight it was never enough for her husband. She ended up in a car accident in March of1999. Her injuries included nerve damage on the right side of her neck, a partially paralyzed face, and the loss of feeling in two of her fingers.

“The lord spoke to me at that hard moment, and he told me that you have to stop not wanting to die, and start wanting to live,” she said.

Overcoming all the challenges by taking baby steps, Davis successfully changed her thinking, habits, shopping, cooking, daily exercise and who she spent time with. It all culminated in her finally locating the courage to leave her emotionally abusive relationship and never look back.

With a healthier body, Davis said she now enjoys the little things, such as being able to walk farther than a half a block, and the ability to breath normally.

But Davis doesn’t just share her stories, she also heals people along the way.

“There have been times where I will see her, and I might be going through something, and she is always willing to lend a helping hand, or a hug,” said Kristi Brown Wokoma, the owner of That Brown Girl Cooks,  who is also Davis’ friend of over six years. The two frequently collaborate to promote healthy, tasty food that derives from African culture.

Wokoma said even though Davis had a troubled childhood, she was able to find the truth in herself. She is thankful for Davis’s willingness to open up her life story, which encouraged her to do the same.

“To the people who have helped me along the way, for those who have put up with my craziness,” said Davis. “Thank you for seeing in me, a confidence, a courage, and a beauty that has value beyond my skin.”

Asked to address herself, Davis said, “Thank you. I forgive you. I value you. You are beautiful. You are wonderful. You are gorgeous, and you are my best friend. I love you.”