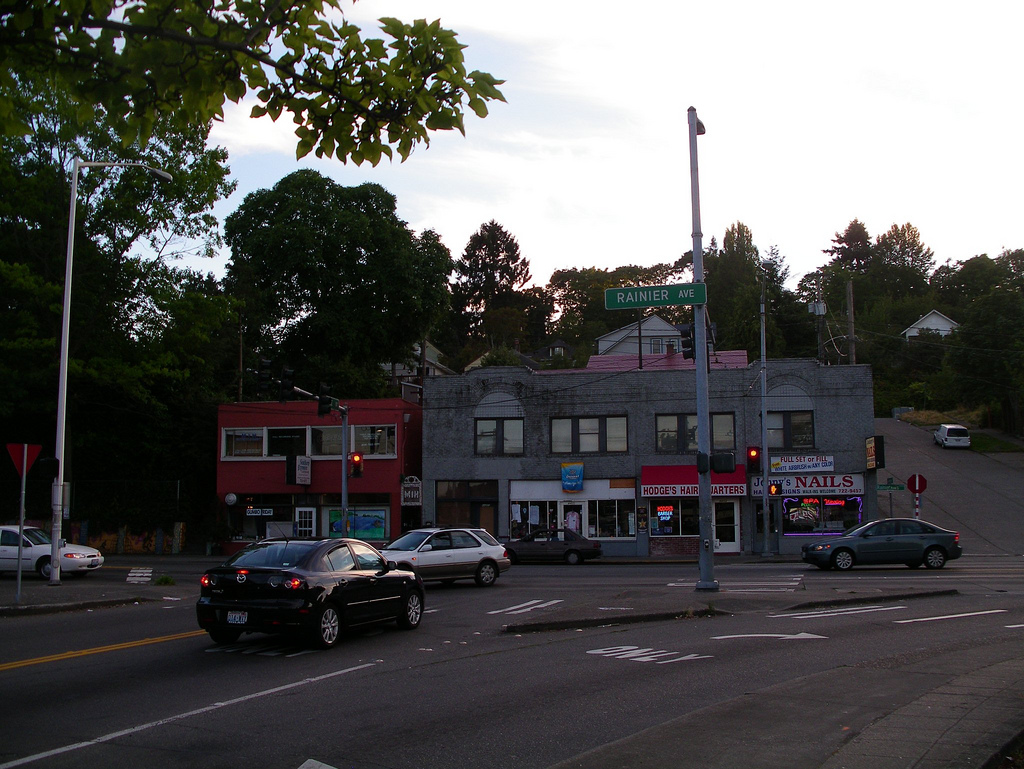 After a string of accidents, many in South Seattle have greeted a recent city plan to put Rainier Avenue on a “road diet” – cutting the busy street from four travel lanes to two – with relief that finally something is being done.

Others are not so sure, characterizing the plan as at best confusing and at worst a plot to make Rainier safer by using traffic jams to force drivers to slow down. Carrying traffic equivalent to nearly a third of the population of Southeast Seattle every day, the street is one of the area’s largest, and a lifeline for many to jobs in the north. And at eight miles in length the corridor is both longer and more densely commercial than some of the case studies presented by the city at community meetings so far. But interviews with engineers and a review of documents by the Emerald found significant support for the city’s plan.

Ray Akers is one of the people who’s not convinced. A real estate agent and Southeast Seattle resident long active in neighborhood politics, Akers said he thought removing the lanes would choke the district, worsening traffic and hurting businesses on Rainier.

Especially on the busiest central avenue in the valley, Akers said he thought the plan would do irreversible harm, especially by driving shoppers away from the main street.

“It’s probably committing us to a future of economic stagnation,” Akers said.

In separate interviews, Akers and Murakami voiced concerns similar to others contacted by the Emerald.

From traffic overflow onto Lake Washington Boulevard to drivers cutting through neighborhoods at peak times, to backups caused by buses stopping to load and unload, a common refrain was that the plan doesn’t take into account the nature of the long corridor, which sees almost 20,000 trips on an average day.

And while the particulars varied, most of the doubts revolved around the same general worry: that cutting the main Rainier Valley thoroughfare down to one lane each way will spike traffic and create problems that will ripple through the community.

City traffic engineer Dongho Chang agreed that the notion of one-lane being better than two seems counter-intuitive. But the heart of the idea, said Chang, is that one lane can actually be both more efficient and safer if you remove all the obstacles from it.

In a series of interviews, Chang explained the the thinking behind the road diet, answering many of the concerns raised by community members. A review of public documents also supported Chang’s statements.

On Rainier Avenue today, Chang said, obstacles can appear in either lane, such as a car turning left or right. Cars turning left have to wait longer to make a risky left turn across two oncoming lanes, and drivers behind often make sudden lane-changes to get around them.

On the ‘road-diet’ plan, Chang said, a dedicated center turn lane would get left-turning drivers out of the way, not only giving them a safe place to wait for an opening, but also only one lane to cross. Also, Chang said, every bus stop will have space for transit to pull completely off the road, and separate space for cyclists will get bikes out of the way of cars.

The numbers back Chang up. Although Rainier will be the longest Seattle road to go on a diet so far, it won’t be the busiest, either in the city or in the country. In documents made available by Chang, and others searchable online, previous road-diets are shown to have worked – even on busy main roads.

At community meetings, two examples Chang and other city representatives used were Stone Way in Wallingford, and Nickerson Street, which runs in the valley between Magnolia and Queen Ann neighborhoods.

But some community members raised the point that neither was as busy as Rainier, which handles an average of 19,700 trips per day, and neither handles both a high volume of through traffic in a business district.

Asked about the difference, Chang pointed to two other road-diet projects: on North 125th Street, and on North 75th Street.

North 75th sees 20,000 daily trips on average, more than Rainier. North 125th sees fewer on average – only 16,200 –  but runs through a business district and carries lots of buses and commuters, including people detouring around the toll bridge on SR-520.

Instead of choking up, average speeds on both were the same after the road diets, Chang said. Only maximum speeds went down, as would-be speeders got stuck behind law-abiding drivers. And the average number of daily trips actually increased – meaning both roads are actually carrying more traffic after the road diets than they were before.

The positive changes were confirmed, Chang said, by before-and-after measurements taken in nearby neighborhoods as well, which showed drivers weren’t skipping off of the newly slimmed streets.

Perhaps most convincing for Rainier Valley residents, though, are the changes in safety on both roads. According to documents online, including a survey of road diet results in the city by a private firm, 125th saw an eight percent decrease in serious collisions and a 69 percent reduction in speeding.

North 75th street saw similar changes, Chang said, although complete numbers for the 2013 project aren’t due out until next week.

The city is also following its own guidelines for when and where road diets are appropriate. In documents from 2013, traffic planners laid out criteria for determining whether a road diet would be a good fit for any given road. While smaller roads get basically automatic approval, bigger roads like Rainier have three criteria that need to be met, including specific traffic levels at stoplights on and around the roads, and months of data-gathering for a “Synchro” computer analysis.

Traffic at stoplights on and around Rainier meets the criteria, and the city performed not only the Synchro analysis, but also a second type of computer simulation, Chang said.

Neighborhood outreach is also a part of road diets, Chang said, noting that community meetings started last Fall, after requests  from the community for safety improvements on the corridor, and have included meetings with business owners along the route.

Chang admitted that the effect of road diets on nearby businesses haven’t been studied extensively, mostly because traffic planners have always seen the changes as matters of safety. To monitor the effects of the project on businesses in the area, Chang said, the project will include monitoring sales tax reports, to see if the project hurts businesses – a first for the city.

Still, all the data in the world so far hasn’t changed how some community members feel.

The fact that the project is the longest in the city – eight miles compared to a few blocks for some of the city’s other road diet projects – puts it in a different league, said Akers.

“I’m not buying it,” he said. As the biggest road in the Valley, Rainier is the artery of the community, he added. “We lose that if we lose the lane.”

For her part, Murakami said she was skeptical if nothing else of why simpler methods weren’t being tried, not only on Rainier but throughout the community.

One tactic both Murakami and Akers agreed would help traffic and improve the neighborhood in other ways: more police.

“When the patrol cars are looking for speeders, they catch people with outstanding warrants,” said Murakami.

Without prompting, Akers in a separate interview seconded the view.

“It’s obvious the simplest and quickest fix is enforcement,” he said.

Looking at neighborhood like Greenwood, he said, it’s hard not to feel like they get improvements – but when Southeast Seattle has a problem, the city just wants to take something away.

12 thoughts on “Rainier Road-Diet: Amid Community Concerns, City Checks the Boxes of Due Diligence”