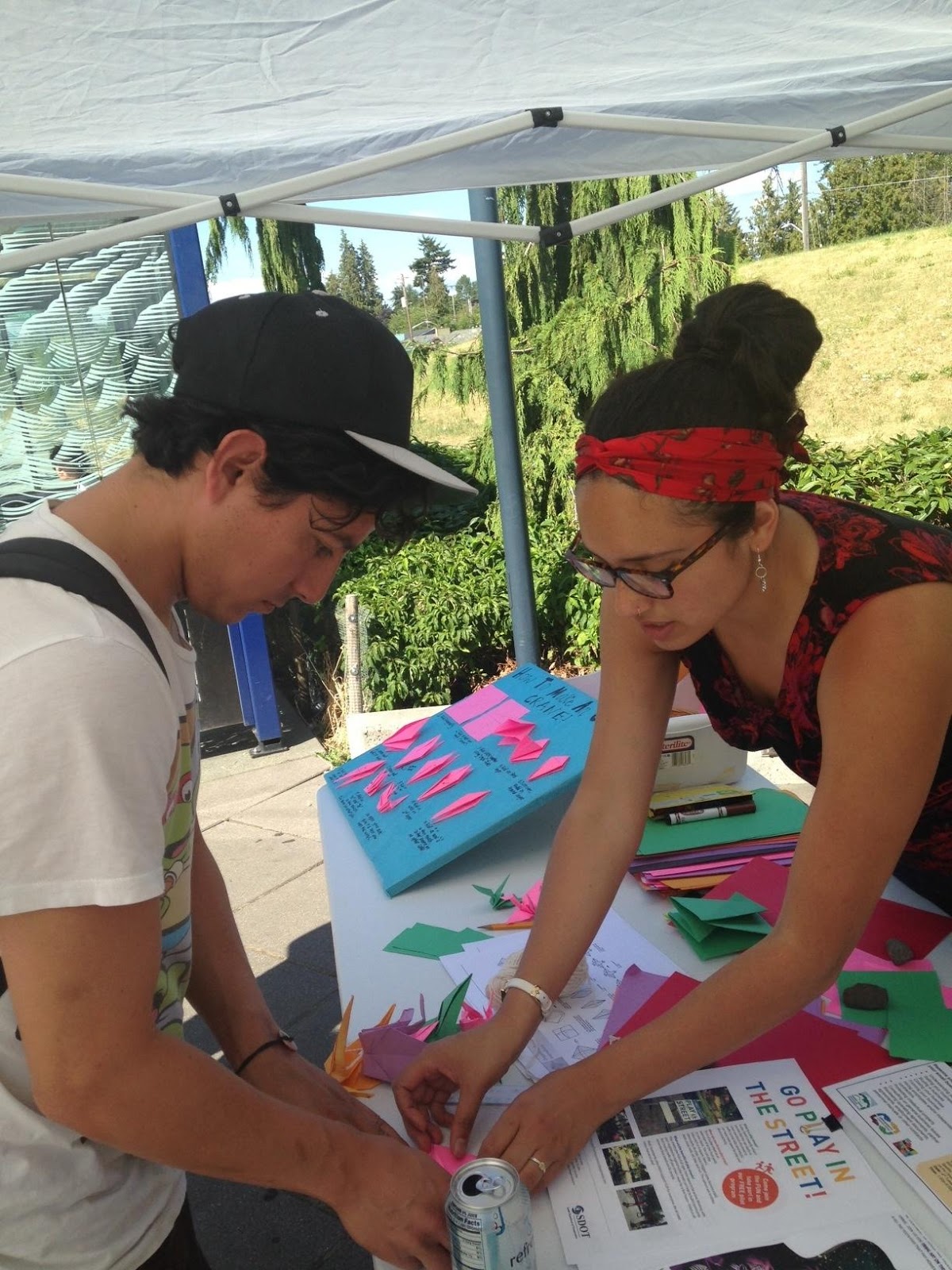 The Rainier Beach neighborhood is about to get some love – the kind of love that only someone who knows your charms, your quirks, and your shortcomings, can give.

The love comes in the form of attention and resources for the many small, family-owned businesses in the neighborhood, to improve their storefronts – make them POP! – and make them safer for customers and people who work there.

The love comes in the form of creative community events – large and small – that will happen around the neighborhood, even in places you might not expect: at the sometimes desolate Rainier Beach Light Rail Station, at the little triangle shaped “park” near the Metro bus shelter at Rainier, Rose and Wabash, or in the parking lot of our neighborhood Safeway.

There is a more technical term for the love coming to Rainier Beach. In the parlance of policy makers and academics it’s called “place-based interventions.” These interventions are specifically designed to reduce crime that affects youth in five “hotspots” in the Rainier Beach neighborhood. They are the result of a community-based problem solving effort called Rainier Beach: A Beautiful Safe Place for Youth.

Seattle is one of the first cities in the U.S. to use a community (not police) driven place-based approach to address crime at youth hotspots. Instead of looking at an entire neighborhood, or a specific demographic, we look at the physical environment of small places to see how design and activity (or use) patterns contribute to more crime occurring at these locations than other locations in the same neighborhood. The approach is based on the research by George Mason University that revealed that crime, particularly that which involves youth, is highly concentrated at small places. This approach focuses on non–arrest solutions, recognizing that traditional policing tactics may not be appropriate for high-risk youth. It emphasizes that the community itself can exert a great deal of positive influence – by setting and imposing informal social controls – which is key to positive youth outcomes.

Identifying Safe Passage and the other place-based interventions was the outcome of an intense, 9-month community-based problem-solving process. The process began in Oct 2013 with a focused outreach and recruiting effort, which resulted in formation of a Community Task Force of over 100 community members who reflect the diversity of the Rainier Beach neighborhood. We next devoted time to building capacity for data driven problem solving, using a public-health model to train the Task Force on the problem solving process.

We started with defining the specific youth crime problem by analyzing Seattle Police Department youth victimization and offense data. Community members were then asked to “tell the story” of youth crime at each location. The story took into account not just numbers – the hard data like police incident reports – but also the interviews and focus groups with youth, police, Metro drivers and others to get specific with local information that captured each location’s the unique history, culture and context.

One result is the Safe Passage pilot project, which was launched on March 16, 2015 and will run through December 2015. The pilot project illustrates how the “dots” of the place-based approach to crime prevention are connected. Loosely modeled after programs (with the same name) in Chicago and Los Angeles, Safe Passage hopes to reduce fight disturbances and aggressive behavior which data has shown increases at the Rainier Beach Campus after school hours. One of the risk factors identified by the Community Task Force was large youth presence and lack of “place managers” (people who are capable/willing to intervene for common good) after school. Safe Passage will increase guardianship during hours that youth are present in large numbers.

Other community recommendations to increase safety for youth include changing the release time of South Shore K-8 School, which took effect the beginning of the 2014-15 academic year. Staff from Schools and the Rainier Beach Community Center have already noticed positive impacts from staggering the time youth pass through the Rainier Beach Campus. Another approach known by the acronym CPTED (Crime Prevention Through Environmental Design), will help control and limit access to areas where adult guardianship is limited or absent to discourage youth from congregating there,  and use signage and design elements to reduce any other (possibly criminal) activity. These interventions help communicate the purpose of the place, which reduces potential conflicting use patterns by making clear acceptable uses of a place.

Throughout this youth crime problem solving process, I have been inspired by the love present in Rainier Beach. Love that comes in the form of creativity and deep commitment. Love the community has for the neighborhood – the place, the people and particularly its youth. I am optimistic these community-identified, place-based ABSPY interventions, these highly focused doses of love, will have a lasting impact.

Look for more ABSPY stories in the coming months. In the meantime you can find out more information on ways to support Safe Passage and other place-based activities at out our website at http://safeplaceforyouth.weebly.com/