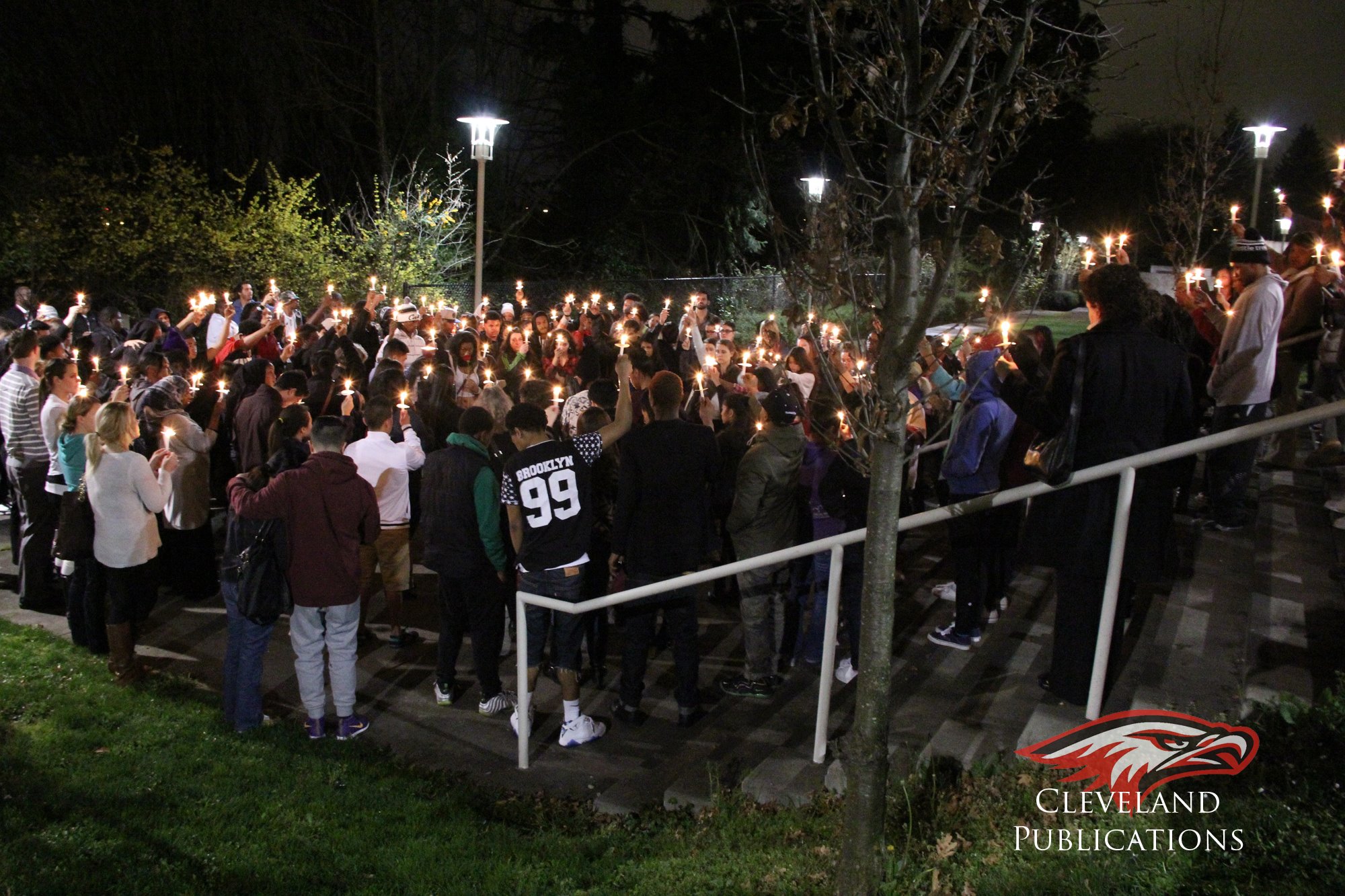 I never met Robert Robinson.  Even though I live just over a mile from his high school, we had little in common and little reason to cross paths.

But when I heard of his death: a drive-by shooting on Sunday barely 6 blocks away from my house – I felt connected to him.  Those are my sidewalks, my corners – how could they be the site of this young man’s death?

I heard there would be an Open Mic and Vigil to remember Robert at Cleveland High School and decided to attend.  I knew I would not pick up the mic or probably even know anyone in attendance.  Still, I wanted to share in the experience of this community grieving and remembering.  I wanted to hear what his peers and teachers and family had to say.  I wanted to join in the collective energy of sorrow and maybe, I hoped, see a shred of light.

When I arrived, the lobby of Cleveland’s auditorium was bustling with people, most of them young.  All around, people wore t-shirts with Robert’s picture reading “In Loving Memory of Robert Robinson” his shining face, beaming out from their chests.  I snuck in and stole a seat in the far back, feeling more like an awkward observer than a participant.

This feeling faded, though, as soon as the Open Mic began.  The grief on display was open and raw and inclusive; I found myself in tears multiple times as the night went on. Person after person took the stage to speak of, sing of, perform spoken word about or simply cry for Robert.  Such beautiful art created to express such unfathomable loss.

I was mostly moved by the expressions of Robert’s friends.  Many brought brilliant works of art to honor Robert: a spoken word poem with reflections on race and violence that took my breath away; another poem intermixed with acappella singing that was so poignant even the performer broke down; and an original song created in the wake of death, filled with palpable pain.

These young people, almost exclusively African American, so often labeled as insignificant in one way or another because of their age or race or manner of speaking, stood up in the midst of the unbearable ashes of this loss and showed themselves to be so much more than they are often given credit for: artists, musicians, athletes, friends, sisters and “bros” standing up in front of their community and carrying the pain – exorcising it almost – with a maturity and wisdom well beyond their years.

Adults stood up as well; teachers and mentors shared Robert’s dreams and goals.  In honor of his fierce desire to graduate, the Cleveland principal promised an honorary diploma for Robert on June 11th to thunderous applause.  These mentors spoke of Robert as a passionate poet, a brilliant musician and a profound thinker.  They mourned the taking of his life when Robert was just beginning to achieve his goals.

Finally, Robert’s family spoke.  First his Aunt’s fiancé, a police officer, took the mic.  More than any other speaker that night, he embodied anger: calling out the “cowards” and “monsters” who took Robert’s life; demanding change in the violence affecting our community; begging for anyone with information on Robert’s killers to bring it to the police pointing out that not all cops are bad and that the family desperately wants justice for Robert.  His passion nearly overtook him and was eventually gently encouraged to hand the mic back after far exceeding his time limit.

Lastly, Robert’s sister Patricia came up on stage.  She refused to use a mic but the room was quiet enough to hear a pin drop as she struggled to be heard through her emotion.  She spoke of how much she loved her brother, and how much he loved their mother even though he was often too stubborn to say it directly to her.  She spoke of regrets, a theme echoed by many of the students who spoke before.  Patricia was one of many who said they wished they’d spoken differently the last time they saw Robert; who regretted not mending their relationship sooner after a “falling out”; who longed for one more chance to say they were sorry or hadn’t meant to say the things they said.

Along with this, so many implored the audience to “be safe” and noted that “it could have been me out on the street corner”.  We were instructed to hold our loved ones close and tell them how much we love them because “you never know when they’ll be gone.”  And while this is logically true, it made me so sad to see these young people, haunted by the guilt of a relationship prematurely stripped away, learning to always expect loss.  It is deeply sad that the rocky years of high school, with all the hormones and emotions and fights and drama should also be saddled, for these young people, with the constant fear that this fight might likely be the one you never have the chance to fix.

After the Open Mic we shifted out to the front steps and lit candles, holding them gently against the wind.  A small group sang Amazing Grace and then one of Robert’s mentors belted out “Precious Lord, Lead Me Home” with all the pain and poignance there is in the world.  Then we held our candles high and, in the most powerful moment of the night, raised our voices to the heavens, drowning out the roaring airplanes above with shouts of “I love you, Robert!”, “We Miss you Robert!” and “We’ll never forget you!”

There is no way to find purpose in violence like this.  There is no silver lining for the loss of such a young man with such potential.  There is no salve for the pain of Robert’s family and friends who will, in large and small ways for the rest of their lives, carry the pain of his untimely death.

Yet, even in this brutal pain, there is beauty.  During the night many said that Robert was looking down on us, listening to us.  I believe they are right.  And I believe Robert, this Poet Musician is pleased with the offerings of his friends; I believe he saw the artistry in song and verse and spoken word; I believe he felt honored.

I hope that the community and the expression from Robert’s vigil tonight will inspire more love, more art, more sharing in this powerful community.  A small light, burning and growing ever stronger – in the midst of such deep darkness.  Like 100 candles held up high, into the Seattle night sky on the steps of Cleveland High School.

2 thoughts on “RIP Robert Robinson: Coming Together in the Face of Tragedy”