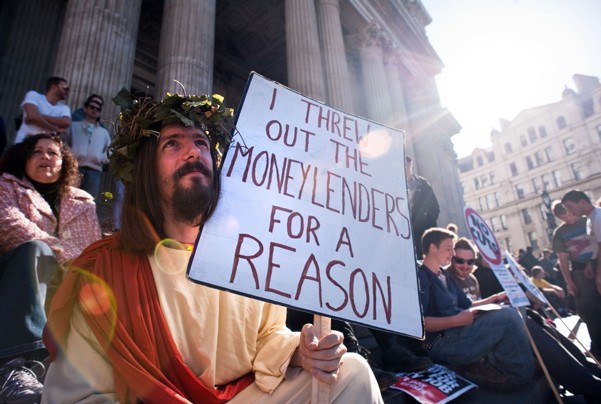 Note: This is the inaugural piece in our Articles of Faith column, which will feature views on current events from local clergy members of diverse religious affiliations.

When something is important we tend to repeat it.  We want to ensure that the message has been fully received and its importance, truly grasped.  In Christianity, there are four different books that tell the story of Jesus.  The books were written decades apart and each communicates its own perspective on the person and work of Jesus.  There are only a handful of stories repeated in each of the four books.  These repeated stories communicate the core of what we’re to understand about the character and message of Jesus.  One such story is all about the time Jesus got really angry.

The day after his arrival to Jerusalem, Jesus and his friends came to the temple.  In that time, the temple represented the religious, economic, and political center of their nation.  Jesus came at the time of year when people from lands near and far packed into the temple.  An annual festival brought everyone to the center in order to participate in foundational religious obligations.  Travelers exchanged Greek or Roman currency for special local coins needed to pay the temple tax.  Observant Jews purchased sacrificial doves as a required part of the religious observance.  Temple business boomed.

Those exchanging coins and selling religious supplies leveraged the religious institutional requirements to turn a vast profit.  Their inflated prices exploited the poor, the marginalized, and the guests of the city.  To make matters worse, their practices were accepted as common place and these middle men were in collusion with the temple authorities.  Together they created and sustained systemic economic oppression around the holiest time of the year.  Into this environment comes Jesus, a relatively young teacher with a growing reputation for justice.

At this point the four stories vary some in detail but the key act remains the same.   Jesus overturns the tables, disrupts the status quo, and cries out, “The scriptures declare, ‘My Temple will be called a house of prayer,’ but you have turned it into a den of thieves!” Jesus chased out those who were buying and those who were selling.  His prophetic act exposed the unjust system of oppression that had been allowed to thrive for far too long.

While our stories don’t tell us how the money changers reacted, we imagine that the normalization of this practice would have led them to respond in confusion or frustration:

Listen, I have to feed my family too.  It’s not like I am getting rich off this.  The rest of the year is slow and this is the one time of year that I get my business into the black.

I don’t know why Jesus has to give us a hard time.  The real criminals are the Romans and their taxes.  What they do is a crime.  Jesus really should be spending his time going after them.

This isn’t fair.  I’m a good person.  I help out people who are really hurting. I pay my taxes and I even give to worthwhile causes when I can.

I’m not doing anything wrong.  I went through all appropriate channels at the temple to set up my business.  I got the right permits and permissions to operate here.  I have every right to run my business.

Chasing me out doesn’t do anything.  If it wasn’t me then it would be someone else selling here, and probably someone worse.

Jesus’ actions didn’t “succeed” in the traditional sense. He didn’t restructure the power dynamics that allowed for exploitation. He didn’t uproot the exploitative economic system. He didn’t even disrupt the business in the Temple for more than an afternoon. So why was this story so important it was worth repeating?

I believe Jesus’ followers remembered and retold this story so many times because Jesus was placing himself firmly on the side of justice. Not by talking about justice or healing the wounds that have been left by injustice, but taking a stand that would ultimately lead to his death.

On March 30th, the day after we commemorate Jesus’ entry into Jerusalem, members of predominantly white churches will come together to call attention to an unjust system of oppression that has been sustained for far too long.  Table Turning Monday is the prophetic act of calling out the economic exploitation of youth of color through mass incarceration. Prisons, courtrooms and detention centers create political and economic capital for people who are in power, and while the vast majority of people in positions of power in King County are white, black youth are incarcerated at a rate seven times higher than their white peers (http://your.kingcounty.gov/aimshigh/search2.asp?JSDetainOffendersApp). Companies that provide the food, clothes, and building are leveraging the state requirement for a detention center to build wealth off the backs of youth of color.

Christians long to place themselves in the role of Christ.  Yet as predominantly white churches we must recognize that in this story we are more likely those who have accepted the horrific status quo, we are the money changers, we are those scandalized by Jesus.  Yet wherever we find ourselves we know that we are called to move.  The divine calls us to plant ourselves firmly on the side of justice, knowing that we are doing long-term organizing work led by those most affected by mass incarceration in our County: youth of color. Our action is directed by Youth Undoing Institutional Racism (YUIR) and Ending the Prison Industrial Complex (EPIC) who are organizing to undo racism in our communities, and we stand in solidarity with them. Not because one action will end unjust systems, but because we have no choice but to stand on the side of justice.

One thought on “Articles of Faith: Turning Tables”