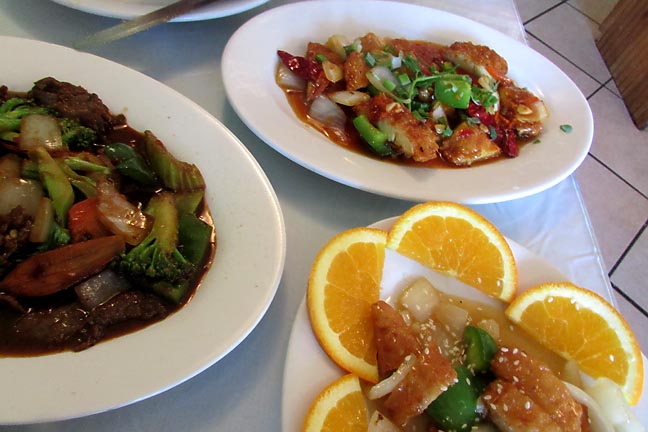 There is irony in the fact that South Seattle barely registered on the lists of the greater city’s two spring restaurant promotions. In fact, South Seattle is a territory that just hosted two food events specific to locales with latitudes below I-90. On March 28, Georgetown Bites treated attendees to a smorgasbord of $5 plates and tastes. Currently through April 12, along the length of MLK in South Seattle, the twelve restaurants participating in Plate of Nations are offering $15 and $25 shareable multi-course meals.

For my first Plate of Nations dinner of the year, I selected Olympic Express located at 7101 Martin Luther King Jr Way S. The family-owned restaurant features Halal Asian food, and was new to me despite its lengthy tenure. My dining partner and I had been seated only moments before the congenial proprietor came by our table to offer his greetings. During the course of our meal we learned that he is one of three brothers who now captain the Olympic Express, having taken over the eatery when their parents retired. The only remaining original tenant of the King Plaza complex, Olympic Express has operated for nearly 25 years and was among the Plate of Nations founders.

Asserting that 98118 is the “most diverse neighborhood in the world”, our host proudly described  Olympic Express as a convergence point for patrons from the many ethnic and cultural backgrounds represented in the neighborhood. The restaurant’s menu reflects this diversity, with offerings ranging from chow mein to fish and chips, with plenty of gyros and pho in between. Olympic Express caters to a meat-eating crowd, with garlic bread being the only overtly vegetarian item on the menu.

For the Plate of Nations event, Olympic Express offered two special items—Thai chili chicken and orange chicken—not found on the regular menu. It’s a shame these dishes aren’t in the standard line-up as both were delectable. The chili chicken’s spice mingled with notes of fish sauce, while the tender orange chicken boasted mellow, natural citrus flavor not overpowered by sweetness or batter. Szechuan beef, among Olympic Express’ usual offerings for $9.99, is a must for those who love a good dose of garlic with a punch of heat. After offering our commendation of the food, we were informed by our host, “Oh, and our lamb curry…you’ve gotta try that!” My friend and I nodded at each other enthusiastically.

The next day, I did return for the lamb curry ($11.99). Upon placing my to-go order, a patron from a nearby table offered his approval, “The lamb curry…it’s very good. I had it for dinner last night!” He spoke the truth. Despite its fiery orange hue, the curry sauce was mellow in heat while bold in spice. Fork-tender chunks of lamb and potato were nothing short of succulent.

While all the dishes from Olympic Express’ Plate of Nations dinner were most enjoyable and the lamb curry outstanding, the ultimate champion was the pair of beef sambusas. This is not what I would have expected. I have nothing against sambusas (samusas or samosas, if you prefer), but they have not traditionally been a snack I crave.

Olympic Express may have changed this, for better or for worse depending on palate pleasure versus caloric intake. The ample, triangular pillows were other-worldly, with a creamy filling of pureed potato and minced beef tucked inside a tender golden shell devoid of greasiness.Our host acknowledged that Olympic Express’ riff on sambusas brings together elements of the Indian, Malyasian and African varieties. Emblematic of the restaurant and the neighborhood itself, a fusion of cultures brings out the best in the whole.

2 thoughts on “Traveling Worlds of Flavor via Olympic Express”