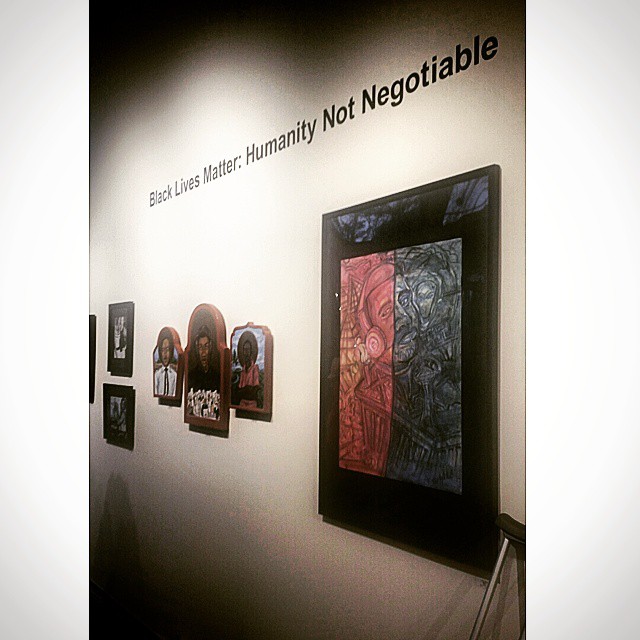 As last week’s shooting in South Carolina of another unarmed Black male has again shocked the nation, the Black Lives Matter: Humanity Not Negotiable juried visual art show officially opened Saturday afternoon at the Columbia City Gallery to- as show organizers put it- help explore the impact of state violence on Black lives. Through art, the show seeks to build on the #blacklivesmatter movement against anti-Black racism following the killing of Trayvon Martin and the non-indictments of police officers in the Michael Brown and Eric Garner killings. The Emerald spoke with show curator Naomi Ishisaka about the exhibit.

What was the intention of bringing this showcase to the Columbia City Gallery?

As a journalist and a photographer, this moment in time is powerful and inspiring. History is being made, and I believe it should be documented. The idea of a Black Lives Matter showcase at the Columbia City Guest Gallery came from the members of the gallery, who wanted to bring the Black Lives Matter conversation into the space. My friend, artist and gallery member Tina Albro, who is a lifelong South Seattle resident, knew I had been documenting and speaking on Black Lives Matters events and issues and asked me if I would be interested in curating the show. I was really excited about the idea and worked with my longtime collaborator Inye Wokoma and others to create the framework for the show. We wanted something that was open to the community, accessible to voices that may not typically have work in art galleries, relevant to the theme in whichever way the artists chose and juried by artists and activists of color who had deep understanding of the Black Lives Matter movement and its importance.

With the Black Lives Matter campaign being such an enduring one, what is it you hope this particular show adds to the national conversation on blacks and police violence?

Though many want to believe that the string of police killings of Black people are occurring in isolation and the result of a few bad apples that can be rooted out, this is a structural problem, with structural solutions. Ferguson is everywhere, including here, in Seattle. I think people often want to see issues of racial and social injustice as things that happen somewhere else to other people. If we feel like the events in Ferguson or Staten Island or North Charleston are far away than we don’t have to do as much to address them here. But Ferguson is Seattle. The Seattle police are currently under a consent decree with the Department of Justice over use of excessive force against citizens, particularly against people of color.  With this show, we want to bring these issues home. We want to use art as a platform to spark dialogue, thought and action.

What was it about South Seattle that made it an attractive venue for this show?

South Seattle is the perfect place to start this dialogue. With rapid gentrification, South Seattle is pushing Black communities and others of color out, and desperately needs to have hard conversations about how gentrification leads to discriminatory policing. This community needs to talk about how the city’s decisions about housing, economic development, urban planning and the arts turn policing into something that protects and defends those with privilege – often White people and others with economic power – and targets Black and Brown community members, creating a disconnect in racial experience, and disparate racial impacts. There has been a heated discussion on online community groups I am part of that reveal a huge gap in perspective, understanding and experience. I am hoping that this show will help to provide some deeper understanding of the real impact of police violence, and help new incoming residents understand how the longtime historic residents of South Seattle, who are largely people of color, are harmed by efforts to increase public safety by increasing policing.

What do you feel every artist who has their work featured in this show brings to it?

Each artist beautifully articulates a different perspective on what Black Lives Matter brings to them. The process was designed specifically to ensure the most expansive interpretation, and the most diversity of views. There are pieces in the show that might make you ask, “what does this piece have to do with Black Lives Matter?” But when we put the call out for creative pieces, we asked artists to submit work that they felt was relevant and the jurors separately selected the work that resonated most with them. So you have an iconic image of Trayvon Martin alongside an image of three boys expressing pure love and joy. I love the complexity this reveals and I hope it reveals the deep diversity in this movement for the audience.

Why do you feel it is important that everyone attend, no matter what side they come down on in the debate on police accountability versus public safety?

All of us want to be safe, and racially discriminatory policing denies safety to everyone involved, including the police. Ending this practice in the 21st Century will require that each one of us sees Black life as equally valuable as any other. My hope is that this show helps, in some small way, to counter myths, inspire hope, reveal complexity, and chip away at what divides us and help Seattle to come together around a shared vision of the city, and the world, we want.

What is your personal opinion on the state of Black progress and sovereignty in our country?

As a mixed Japanese American woman, I am not the best person to answer this. What I can say, however, is that while Black people are being criminalized, Asian Pacific Islander communities are portrayed as “model minorities” and used as tools to justify anti-Black racism. As an ally, it’s important for me to understand and talk about the ways in which the myth of the Black “criminal” is juxtaposed against the myth of the “model” minority, to the detriment of everyone. Black liberation from racism and oppression is necessary for my own liberation, so I come to this movement not only as an ally, but out of my own desire to seek a more just world that isn’t organized around racial inequalities and doesn’t deny my friends and family their lives and liberation.

If people take only one thing away from the show what would you like that to be?

I would hope that people see that this is a broad-based movement led by Black organizers and activists, with diverse support from all walks of life. The Black Lives Matter movement, sparked from an organization founded by three queer Black women, Alicia Garza, Patrisse Cullors and Opal Tometi, is one that is disaggregated, rejects respectability politics and foregrounds the complexity and reality of Black lives and experiences – including queer folks, incarcerated folks, immigrants, young people – and demands justice for ALL Black lives. In Seattle, some of the most powerful leaders of Black Lives Matter actions are young women of color who were moved to collect their efforts and build power by creating Women of Color for Systemic Change. This is what makes Black Lives Matter so powerful to me and I hope comes through in the show.

Black Lives Matter: Humany Not Negotiable runs until May 17th at the Columbia City Gallery.