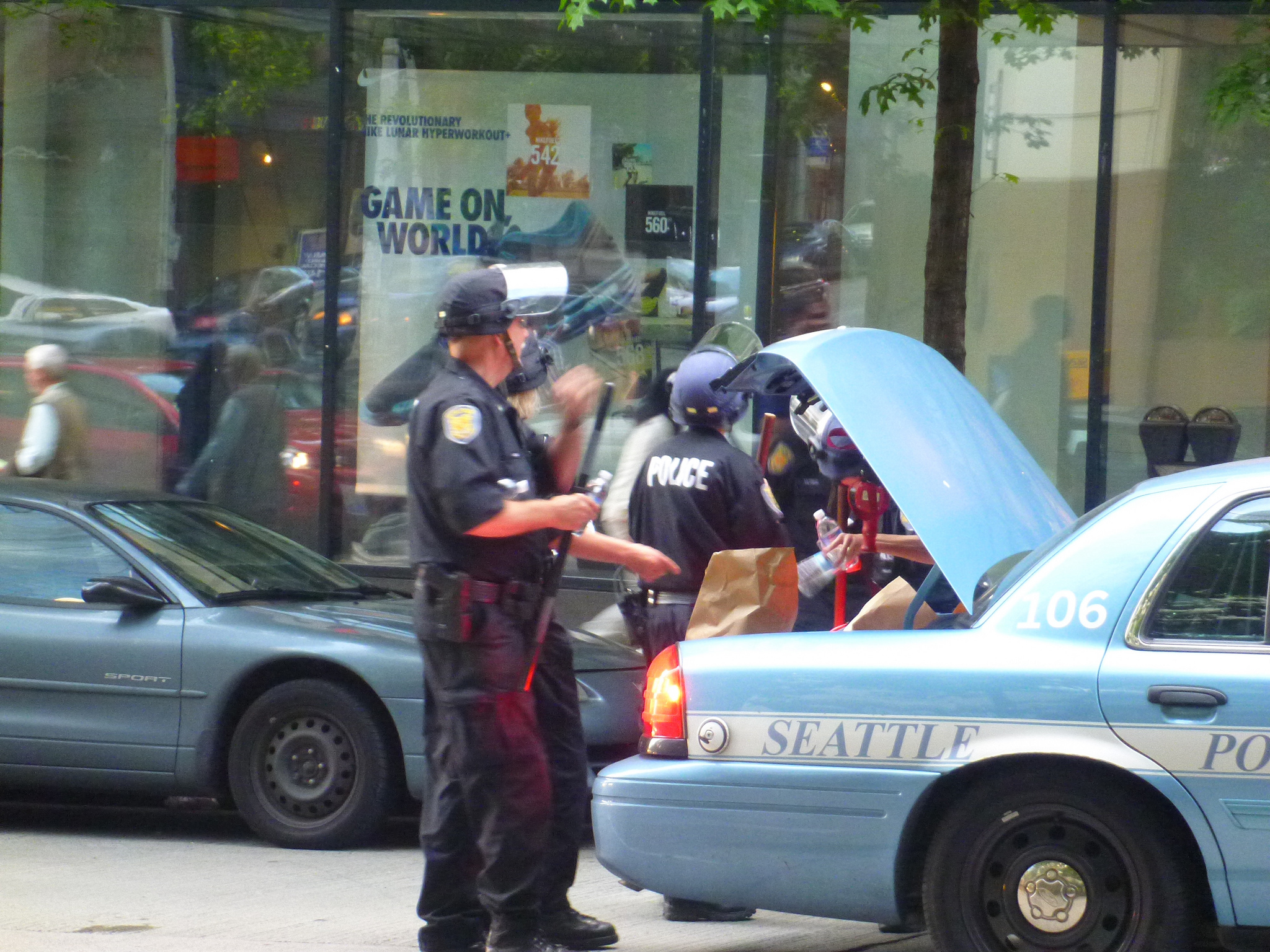 I’d been standing on the sidewalk for at least 10 minutes, watching; my feet cold on the pavement through my boots.  10 minutes of listening to 3 “officers of the law” insult, threaten and intimidate a woman whose supposed offense was a broken tail light.

I stood there feeling pretty good that I was able to hold these poorly behaving cops accountable.  It seemed valiant – and brave – to look those men in the eye disapprovingly and make sure they knew I was watching this disgraceful excuse for police work.

It all began when I saw an unmarked police car make a bogus traffic stop and then aggressively interrogate the vehicle’s occupants in the middle of the street.  Obviously no standard traffic stop, these out-of-uniform officers were looking for information about the whereabouts of a robbery suspect.  The people in the car, a man and woman both Hispanic and middle-aged, were guilty of nothing except a broken tail light but they were instantly treated like criminals.

The man was removed from the vehicle and questioned separately from the woman.  The volume of that conversation was low enough that I didn’t hear any of it.  But the volume of the demands shouted at the woman in the driver’s seat were loud enough to bring neighbors out of their houses.  The entire interrogation was conducted in English, even though the woman repeatedly said she spoke only Spanish.  The officers’ tone was derisive, dismissive, arrogant and condescending from the very first command to roll down the windows.

Among the disrespectful, threatening comments I heard from the officers as they interrogated the driver, the following stood out:

“I know you know where he is.  If we find him at your house, I’m going to arrest you!”

“Don’t you care about your grandkids?  I’m going to take your kids away from you!”

With each of these comments, I grew angrier.  Staring coldly at the officers.  Even moving a few steps closer to be sure I didn’t miss anything and to be sure they knew I could hear them.

But then the cop looks up at me, smirks conspiratorially and asks, “You speak Spanish?”  I was shocked.  “Uh…a little” I muttered, amazed that he showed no shame, after all I’d just witnessed.  “Yeah, well, we’re trying to get an interpreter,” he mused nonchalantly, leaning on the driver’s side open door like he’s sipping a milkshake at Dick’s on a Friday night; “This is going nowhere fast.”

I stood there, stunned.  Here I was – standing tall and proud as an ally in the fight for justice, my presence meant as a visual indictment to these cops’ behavior.  I saw my choice to stay and watch as a clear indicator that I was monitoring their actions and they’d better be careful.

But the cop thought I was on his side.  He figured I’d help them further humiliate and terrorize the poor woman who’d just dropped her grandson off at school.  Somehow, standing on the sidewalk, thinking I was doing good, I’d been mistaken for one of the bullies.

They’ve been talking about bullying a lot at my kids’ school.  They talk about how to spot it, how to defend yourself against it and, mostly, how to stand up for others who are being bullied.  The first thing they are supposed to do is identify the behavior.  “That’s bullying!” they are taught to say.  And that is precisely what I should’ve done on Wednesday morning.  I failed to name the harassment and humiliation and misuse of power for what it was.

Why didn’t I?  Well, because they’re cops.  They have authority.  They have power.  They have guns.  And I do not.  Also, the phrase “obstructing an officer of the law” kept running through my head.  I wasn’t sure exactly what that meant but I feared there would be consequences for interfering.

I wish I had interfered anyway.  I wish I had remembered one of the main principles of nonviolent resistance: authority and power are not intrinsic, but only exist so far as we choose to legitimize them. I legitimized the authority of the officers when I decided not to stand up for my neighbor.  But I could have denied it.

And next time I see the officers of the law harassing people, I’ll be better prepared to do just that.

Second, I learned that filming a law enforcement officer is not obstructing.  On Wednesday I feared making the situation worse by getting out my cell phone and hitting “record”.  And, indeed, the ACLU website makes clear that those who film police are often harassed, detained or arrested – even though the legal right to photograph or film government officials, including officers of the law, has been clearly established.  There are even apps that immediately upload your video to prevent the loss of footage if a cop takes your phone and deletes your video.

Some may wonder if I’m taking this too far.  I don’t think so.  The worst part of the whole ordeal for me was the lackluster response from my friends of color.  They were displeased, but not shocked, to hear me report how the cops had treated the woman they pulled over on my street.  The only thing worse than witnessing a perfectly innocent woman treated like garbage by those sworn to uphold the law is the realization that this is so commonplace.  It just can’t be that way.  Peace-loving, justice-seeking folks like me can’t stand by and let that pass for business as usual.

So next time I won’t stand there, watching and think that’s accountability.  I won’t write a seething complaint email to the King County Sheriff’s Office and expect a real response.  Instead, I’ll get out my phone and start filming.  I’ll be respectful.  I’ll be careful.  But I will not again be mistaken for being on the side of the oppressor.  Next time I’ll stand up to the bullies in blue.

One thought on “Bullies in Blue: Delegitimizing Police Power”