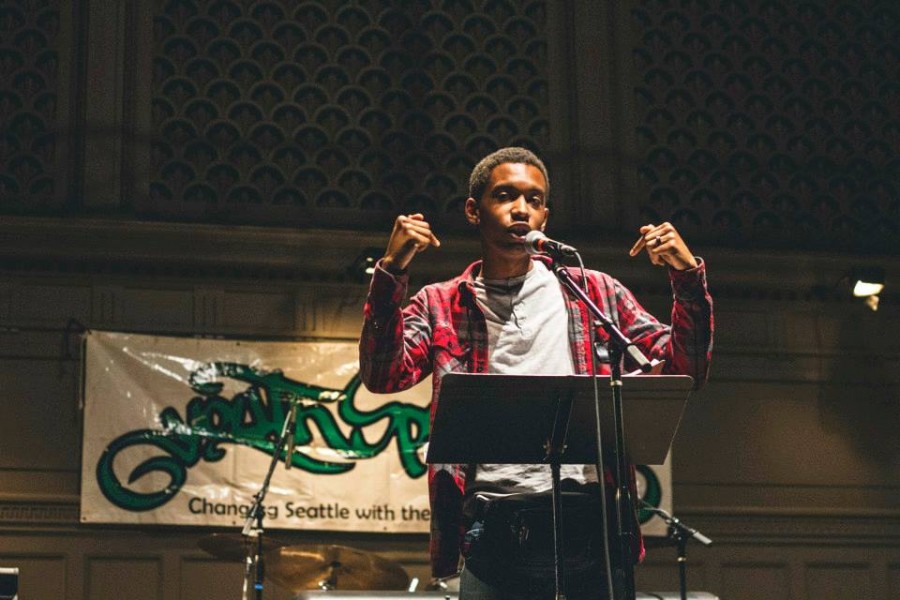 If you know anything about it, you’re saying it in that voice. You’re instinctively repeating it in your head as first a call, then a response. And if you attended the annual Youth Speaks Grand Slam this month you are most likely reliving the spoken fire, the rain of the snaps, the laughter, the honesty, the awesomeness that was the slam. Town Hall was truly a church last Saturday night. If you didn’t shed a tear, laugh out loud, leap to your feet or shout oh damn at least once, then you weren’t there.

Since 2003, Youth Speaks Seattle (YSS) has been synonymous with the youth-led poetry movement. It’s an organization that has brought poetry to classrooms, coffee shops, and community centers around the city through writing circles, workshops, open mics and slams.

For those of you unfamiliar, poetry slams are a competitive spoken word battle, invented in Chicago in the 1980s by a guy named Marc Smith (“So what?!”). Smith wanted to find a way to get people more interested in poetry. It really worked.

Since then, these competitions have taken place around the world. Participating poets have 3 minutes to deliver what they have to say before a panel of judges, then each judge ranks the poetry from zero (please never write again) to 10 (I think my heart just exploded from the need to get big enough to fully love this poem).

I’ve never seen anyone get a zero, but the points are not the point. The point is … the poetry.

“The Grand Slam is the magical culmination of our annual slam series, and for that reason, it represents the work that goes into the entire year of Youth Speaks Seattle – not simply the logistics of a single one-off event,” Shelby Handler, the coordinator for Youth Speaks Seattle, told me. “It showcases the immensely creative and brave work of young poets to write their raw truths.”

This year’s Grand Slam was hosted by YSS alum Hollis Wong with a special performance by Seattle Globalist contributor Hamda Yusef, who also is a YSS alum. The featured performance that brought everyone to tears was by YSS alum, singer, songwriter, and spoken word artist Mary Lambert. Lambert is best known as the female vocalist on the Macklemore and Ryan Lewis hit “Same Love” that was the highlight of the 2014 Grammys.

This month, 13 incredible youth poets spoke their hearts into a mic for the opportunity to be one of the elite five who will represent Seattle at the Brave New Voices Slam in Atlanta, GA. As I sat in the audience, I realized that even more to the point than the poetry is the community.

“I have learned that art, especially spoken word, is a powerful tool for social change,” said Carlynn Newhouse, the 15-year-old who won this year’s Grand Slam. “Maybe most importantly I’ve learned that I have a voice and my experiences are important and there is a platform to share them.”

Despite the event being held in what many think of as a white city, on stage I saw youth of color dominating the stage (13 out of 15 participants). I saw a standing room audience of people of all ages and ethnic origins coming together to support them, to validate their voices, to celebrate their talent and hear their stories. It was raw, beautiful, and profound.

“YSS seeks a brave space where youth of color can speak the truths that racist and oppressive systems attempt to shove under the rug,” Handler said. “Some ways we try to do this is by grounding our spaces in a social justice framework, being connected to grassroots movements and honoring leaders and teaching artists of color. YSS has always been a hub for challenging and transforming culture through art and political education.”

Each Grand Slam is a transformative, once-in-a-lifetime experience. Through their poetry youth shared a myriad of experiences and viewpoints. Topics ran the gamut from light-hearted diatribes on the pleasure of taking naps, to grittier tales of school bullying, police brutality, depression and advocacy.

“Growing up is hard, things happen in life that you can’t help. I think everything hurts a little more because it’s the first time you’re experiencing being used, being heartbroken, being silenced, death,” says Acacia Salisbury, a 17-year-old high school senior who also made the YSS team. “But at the same time Youth Speaks is a place where I learned to put difficult things I didn’t want to talk about, parts of myself I wasn’t that proud of, on paper and take pride in my stories and those experience because they’re mine.”

Sixteen-year-old Addie Sawyer, also a finalist headed to Brave New Voices, said: “I think what makes this community so special to me is all the love and support we drown each other in, we encourage everyone to do unapologetically themselves and I do not get that anywhere else and it is marvelous.”

Regardless of age or any other identities or affiliations, everyone at Town Hall that night became a part of the YSS community, together in the solidarity of sharing and bearing witness to one another’s experiences.

After a moving speech by Carlos Nieto, last year’s slam champion, the audience contributed $14,000 on the spot to cover the costs of sending the team to Atlanta to the Brave New Voices slam.

Handler said the experience will be huge. “On a base level, there is no other space that convenes over 500 young artists from all over the world to compete and build community,” Handler said. “It’s a space that brings marginalized voices to the core, centered on and led by young people of color.”