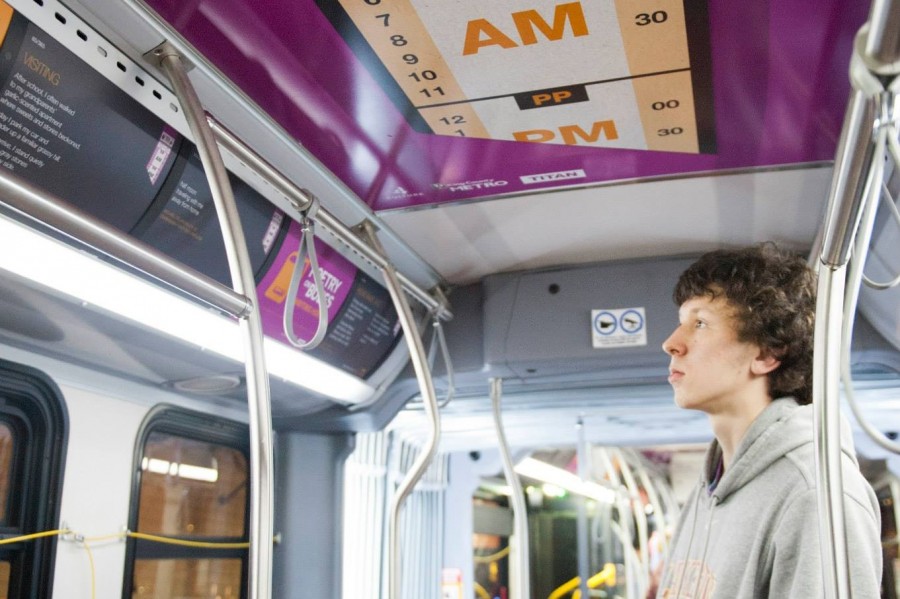 What does home mean to you?
There is a rice field in Manila that smells like
The nape of my mother’s neck.
This is how I have dreamt her for many moons.
Heart strings tuned to the chord of umbilical
I strum her song with each breath in
Remembrance of who I am from.
—Kyle Ricci, 29, “Momma’s song.”

Kyle Ricci’s ode is one of 365 poems by local poets that you might see on the 4Culture website or your bus commute home as part of “Poetry on Buses,” a program organized by arts organization 4Culture and King County Metro Transit. The concept debuted in 1992, featuring fifty poems a year from Seattleites of all ages and backgrounds that were printed on placards and displayed on buses.

After a 7-year hiatus, “Poetry on Buses” returned last year with a goal of expanding its reach—not only in number of poems, but into the hearts of the Seattle-area’s many different cultures, languages and traditions.

“We want to work with as many communities as we can, its part of our mission with 4Culture,” said Christina DePaolo, a spokesperson for 4Culture.

Poets submitted more than enough poetry to feature one poem a day for a year on the Poetry on Buses website. Riders will see poetry on 125 placards on the King County Metro’s RapidRide lines. Submissions were selected by Ascalon and other esteemed poets including Hamdi Abdul, Kathleen Flenniken, Carlynn Newhouse, Raul Sanchez, Mong Tu Tran and James West.

Beyond the poetry, this process became a cross-cultural experiment that bridged boundaries, forged friendships and created space for communities that have historically not interacted with one another. The program included poetry events around Seattle in libraries, community centers, the Moore Theater and people’s homes. Attendees wrote and shared their original poetry and the poetic traditions from their native lands.

“Never have these communities been able to butt up against one another,” Ascalon said.

At one event, Somali audience members listened to Vietnamese sung poetry. “It was one of my favorite community experiences around poetry that I have ever done,”Ascalon said.

And clearly from the response, poetry has become a catalyst for creating community across cultural divides, shattering the Seattle freeze and providing an opportunity for people to engage one another in a deeper way.

“When people ask me where home is, it’s a complicated question,” says poet Michelle Peñaloza, who will host poetry readings for “Poetry on Buses.” “Poetry is a beautiful way and a productive way to enter into these conversations.”

Lately, it’s been explosive to talk about where we’re from and who we appear to be, as people battle over immigration reform and in protest of excessive police violence against people of color. Many different people, communities, and organizations attempt to discuss identity, but this is one approach that is unifying.

Whatever it is, it’s working.

“I don’t think there is another project in the country that does this kind of translation project with the people,” says Ascalon. Other cities such as Boston have public poetry programs, he says, but they don’t have the language liaisons that have been so integral to Seattle’s program.

Who knows if it will continue. Metro had a budget for outfitting their new RapidRide buses this year, but next year, this money may not be available.

Given the important strides made in fostering community, 4Culture hopes other local organizations will step in to make sure this project continues.

What will be the next iteration? Are there other forms of creative expression that can do the same thing and will Seattle come together to make this a priority?

If you can’t make it to a bus, the Poetry on Buses Roadshow will bring some of this experience to a library near you.

Poet Michelle Peñaloza hosts three poetry readings in the series and also writing workshops further exploring the concept of home. The first was last Saturday at the Covington library. The next two are at 1 p.m. May 9 at the Bellevue downtown library and from noon to 6 p.m. at the Fisher Pavilion at the Seattle Center during Folklife on May 23.

One thought on “‘Poetry on Buses’ brings Seattle’s Languages, Cultures Along for the Ride”