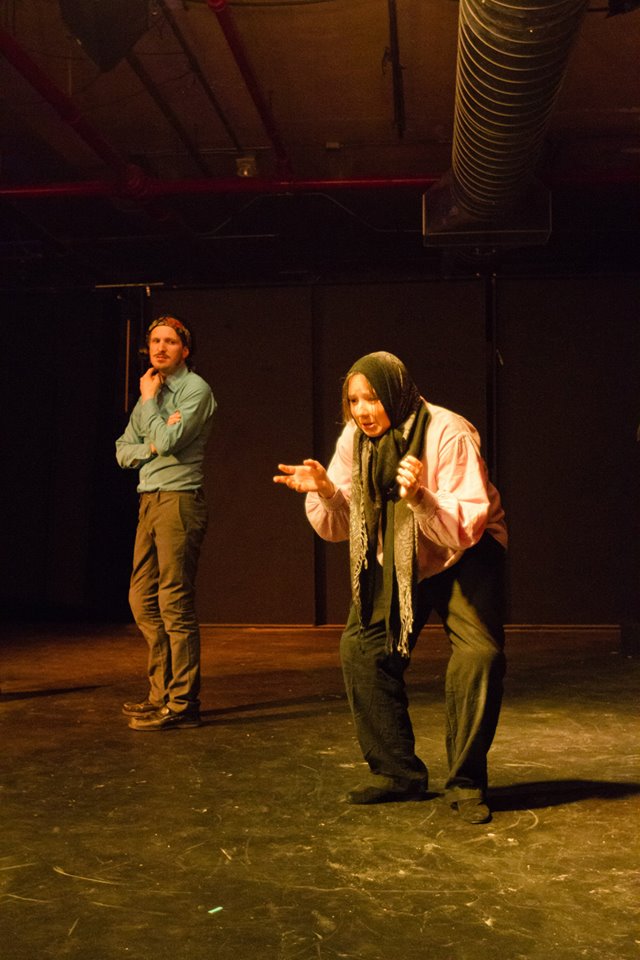 Bertolt Brecht is one of my all-time favorite playwrights. His style – called Epic Theater- is topical, controversial, and features a concept called the Alienation Effect, in which the audience is continually reminded that the play is a play, so they can think about the ideas being brought to the table, rather than being swept up in the action. In my opinion, his work is brilliant.

Of course, this means that people tend to royally fuck it up.

So, as I always do when seeing a Brecht piece, I entered the Ballard Underground, home of Ghost Light Theatricals, with a healthy mix of excitement and worry.

As the lights dimmed in the house, the actors entered, laughing, in street clothes. Most were either barefoot or in farming shoes; this detail alone was promising. The plot of this particular piece follows a group of farmers who put on a parable, in order to teach a group of goat herders the idea that those who use and care for a resource have better claim to it than those who own it by blood, family name, or any other prior claim. Though the parable takes up the entirety of the piece, it is important, in accordance with Brecht’s Alienation Effect, to call attention to the fact that it is a performance. With a simple costume choice, this ensemble was on its way to illustrating this effectively.

As the play progressed, I continued to notice small but consistent aspects of the piece that furthered this theme. From the creation of each setting with human bodies – my personal favorite being a house door created by ensemble members – to the rapid-fire switching of characters, I was constantly reminded that this was a performance being put on by actors. The consistent use of scarves as props was yet another small – but consistent – choice that strengthened this idea. These choices enabled me to think about what the actors were saying instead of becoming fixated on the story. This is one of the most important elements of performing a Brecht piece, and the ensemble managed to pull it off both effectively and in an entertaining fashion. It was, in short, a cleverly directed piece.

However, despite these clever choices, there were some moments in the piece that were – for lack of a better descriptor – downright weird. The more climactic moments of the play featured one of the narrators silently walking behind characters and touching them on their backs – presumably to influence their important decisions. The choice felt unnecessary and deviated from the self-aware play-within-a-play nature of the performance. Additionally, there were some strange dance sequences that again, felt unmotivated by either the text or the concept behind the production. The combination of these odd choices and the skilled use of space and bodies to create environments left me simultaneously impressed and confused.

The place where the show faltered most was in the acting. Though some performances shone through, as a whole the ensemble was mediocre at best, and as a result what could have been a surprisingly consistent and interesting take on Caucasian Chalk Circle was demoted to a play that, for all of the director’s skill, felt a bit like bad community theater.

Even with these imperfections, I walked away from this performance at Ghost Light more enthusiastic than I ever have been before when leaving that space. Ultimately, Ghost Light did an admirable job portraying a difficult playwright, and they deserve commendation for that.

The Bottom Line: Ghost Light Theatricals managed to pull off a consistent, entertaining, and streamlined production of The Caucasian Chalk Circle. Even though the production was hindered by poor acting, the clear direction and commitment to creating a play-within-a-play structure ultimately succeeded in creating an effective story. I’m curious to see what Ghost Light has in store for us next.