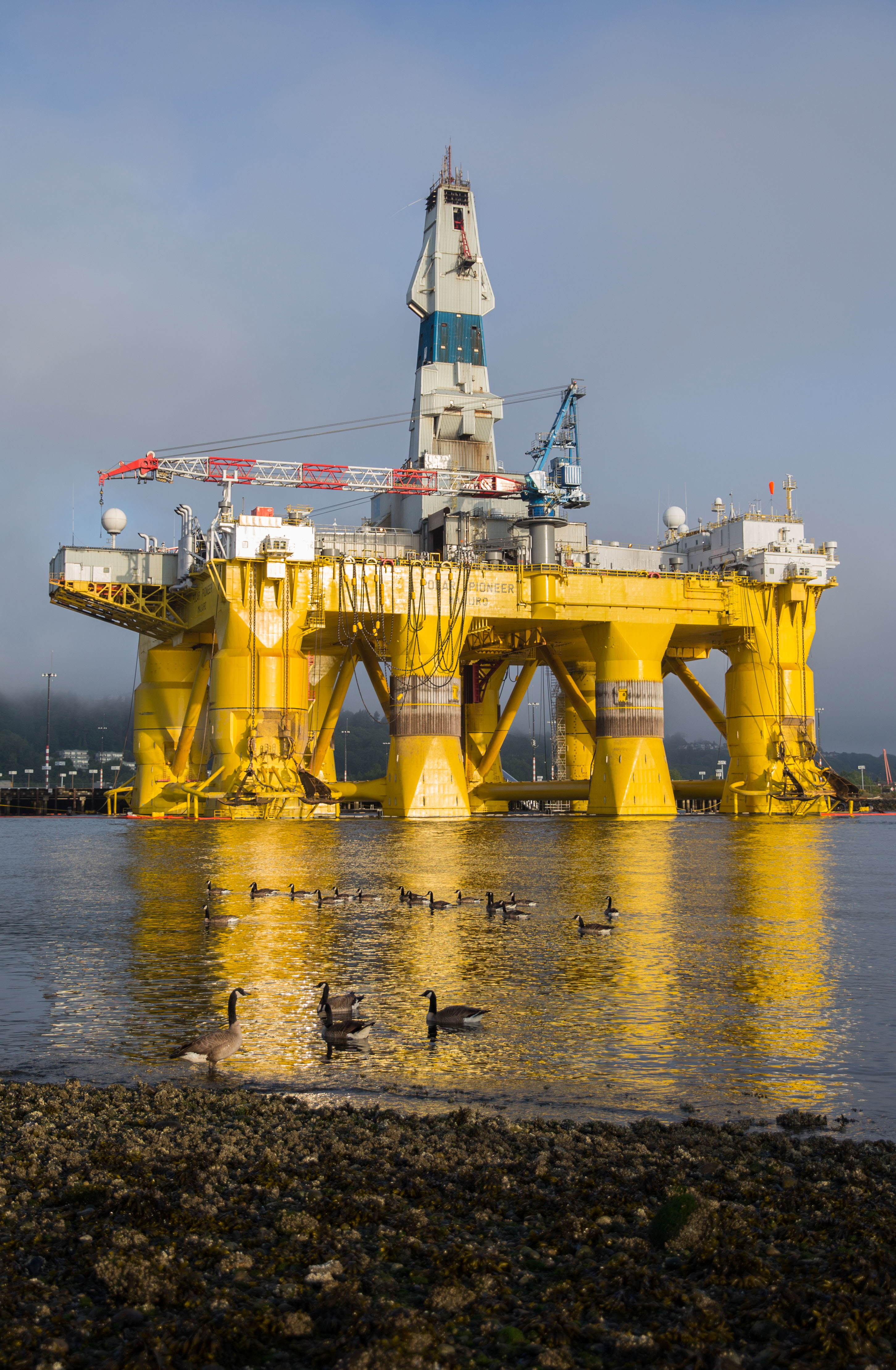 The buzz was all about oil drilling on Saturday from Jack Block Park down to Seacrest Park in West Seattle.

At 10a.m., at least eight dozen people towed brightly colored kayaks down to the designated group launch site on the pebbled shore of Alki for an organized protest referred to as the “Paddle in Seattle Flotilla.”

Some rented kayaks from local business heavily involved in the day’s protest, Alki Kayak Tours, who worked with event organizers to help train people new to the sport. Others brought their own. With dozens more streaming in as the morning charged steadily into afternoon, everybody gathered for the same reason: to protest Shell’s oil rig, the Polar Pioneer, docked at terminal five in the Port of Seattle.

Carlos Hernandez was among the first few “kayaktivists” to arrive seaside suited up in a life vest; ready to paddle out. He’s from Honduras and independently protesting Shell’s oil exploration plans in the arctic this summer because he doesn’t like the way America seems to him like a country prioritizing profits ahead of people.

Hernandez was among the first cluster of kayakers to paddle out after a volunteer organizer from the Backbone Campaign gave a water safety pep talk and led the cluster of seafarers in a quick rally chant.

By 11a.m. there were over one hundred kayakers in the water, paddling and sometimes chanting. A small black boat carried members of the Movitas Street Band, a group of radical musicians who come together to provide musical support for political actions. The giant brassy tuba head and the long neck of a trombone were the only instrument parts visible from the shore, but the upbeat music could be heard by everyone nearby on the water and on foot.

A group of three singing activists sitting on the beach sang songs about oil drilling, repeating the day’s rally cry lyrically, “Shell No!” Sharon Abreu strummed a small acoustic guitar and led with the vocals while Joanna Schoettler and Zelle Windham wistfully harmonized.

This isn’t Abreu’s first time leading other activists in song. She has played guitar and sang for years at protests, rallies, and court hearings all over the United States.
“There are over a hundred volunteers here. We are spending so much of our unpaid, volunteered time and energy day after week after month after year pushing back against these corporations that just have tons of money. So we need to have fun, we need to celebrate each other and our efforts and our successes. And that is what the music allows us to do,” said Abreu.

Schoettler met Abreu recently at a hearing in Olympia for oil trades. She held a bright blue, homemade banner while singing that said, “Protect our water of life.” Singing protest songs, like crafting decorative protest signs, appeals to her.

“It’s one of those things that brings all of us together,” said Schoettler. “It’s art, and this is part of the art”

So much art was to be absorbed and appreciated during the first day of a three-day “Festival of Resistance to Shell’s Arctic drilling plans,” like windsock-eyes, windsocks decorated like salmon, crafted by area artist Denise Henrikson. The festival was organized in synergy by Backbone Campaign, 350 Seattle, Bayan USA Pacific Northwest, Mosquito Fleet and Rising Tide Seattle.

The massive collaboration focused on kicking off the festival of activism with a fun-filled Saturday afternoon that focused on art, activism, community, and families.

Jim Meyers, a local photographer, brought his wife, his son, and his daughter to the day’s event. He was excited to get a shot of the kayakers in front of the rig, but that wasn’t the only reason why he and his family were present for the protest.

”The other big motivation is bringing the kids down here,” said Meyers.

“This is an event that they should be involved in because it will effect them for the rest of their lives, too,” said Meyers.

SPD was present on land and by boat as more kayakers pushed offshore all afternoon. A medic tent was set up with volunteer EMT’s and a physician lounging in camping chairs, ready to help if needed.

By one o’clock, there were over two hundred kayakers, paddlers, tribal canoes, sailboats, and rafters paddling towards the Polar Pioneer. A solar powered barge, dubbed the “Solar Pioneer,” floated about a half-mile from shore. This served as the main stage for what Eric Ross, Organizing Director of the Backbone Campaign, called an indigenous jam session and speakers platform.

A member of the Quileute Nation was among the first to speak from the Solar Pioneer. As a helicopter loomed noisily overhead, he asked everybody who could hear his voice if they would commit themselves to protecting the Earth for generations to come.

“Repeat after me,” he asked. And with every few words, people on the water and on land repeated him.

His words reverberated off the water and echoed audibly, all the way to traffic bustling through the street like there was two of him –  one on water, one on land.

If Shell’s plans for oil exploration this summer will drill the humanity out of Earth, festival attendees came together in the hundreds to artfully, peacefully, and safely vocalize their human right to protest: “Shell no!”